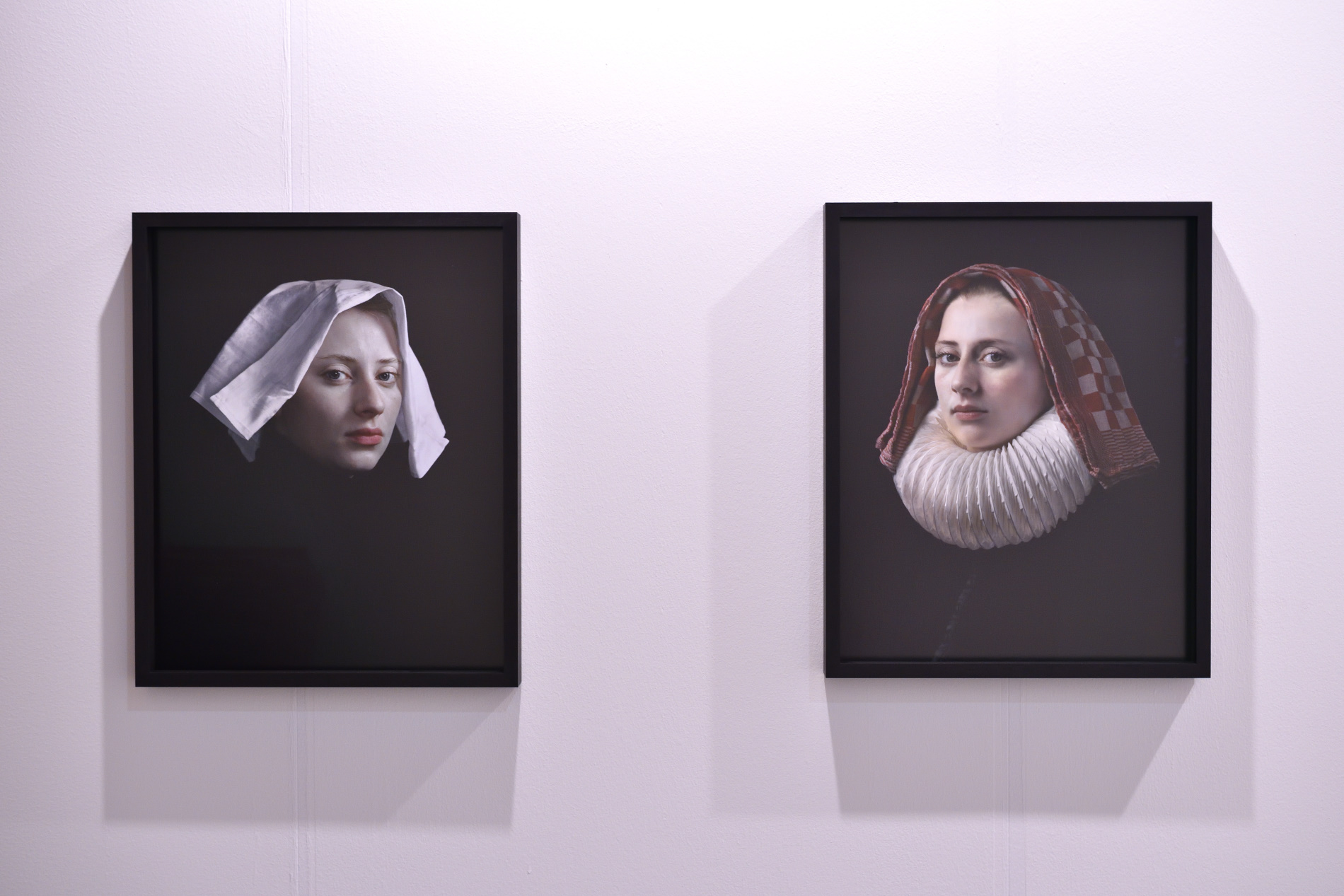 2017 was the third year in which viennacontemporary was organized – and it was the first time for me to visit it. I summed up a few thoughts in my previous article dedicated to the event, but I really wanted to pick out some galleries and artists who captured my attention. Here we go…

The new exhibition opening 26 November 2017 entitled the “Remastered – The Art of Appropriation” focuses on works that are based on the symbolic or physical appropriation of other artworks. It is curated by Verena Gamper.

At viennacontemporary the Kunsthalle Krems brought an art piece from Jonathan Monk as a forerunner.

He was born in Leicester in 1969 and graduated from Glasgow School of Art in 1991. Today he lives and works in Berlin. Monk is most known for appropriating the work of other artists – conceptual, minimal or pop art – and using it for his own purposes. “Appropriation is something I have used or worked with in my art since starting art school in 1987. At this time (and still now) I realised that being original was almost impossible, so I tried using what was already available as source material for my own work.” (source: Lisson Gallery).

In 2007, Sotheby’s auctioned the divisive American Neo-Pop artist Jeff Koons’ gigantic, shiny “Hanging Heart” (Magenta/Gold) for $23 million dollars. This result made the nine feet tall, stainless steel creation the most expensive piece of art created by a living artist ever sold at auction at that time. (His “Balloon Dog” broke this record at Christie’s in 2013.) Not surprisingly, this direction in the auction and art world received different opinions not only from art critics and collectors but also from other artists as well.

In his Deflated Sculpture (2009), Monk remade the iconic Rabbit (1986) of Koons. It is a sequence of five stainless steel sculptures in progressive states of deflation, quoting Koons’ original source (an inflatable toy bunny). They were shown at two exhibitions: The Deflated Inflated in the Lisson Gallery in London and The Inflated Deflated in the Casey Kaplan Gallery in New York. Beyond these, he exhibited other sculptures and photorealist style paintings, depicting the various stages of the creation of the bunnies.

A Copy Of Deflated Sculpture No. 1 (2014) was on view at the viennacontemporary. 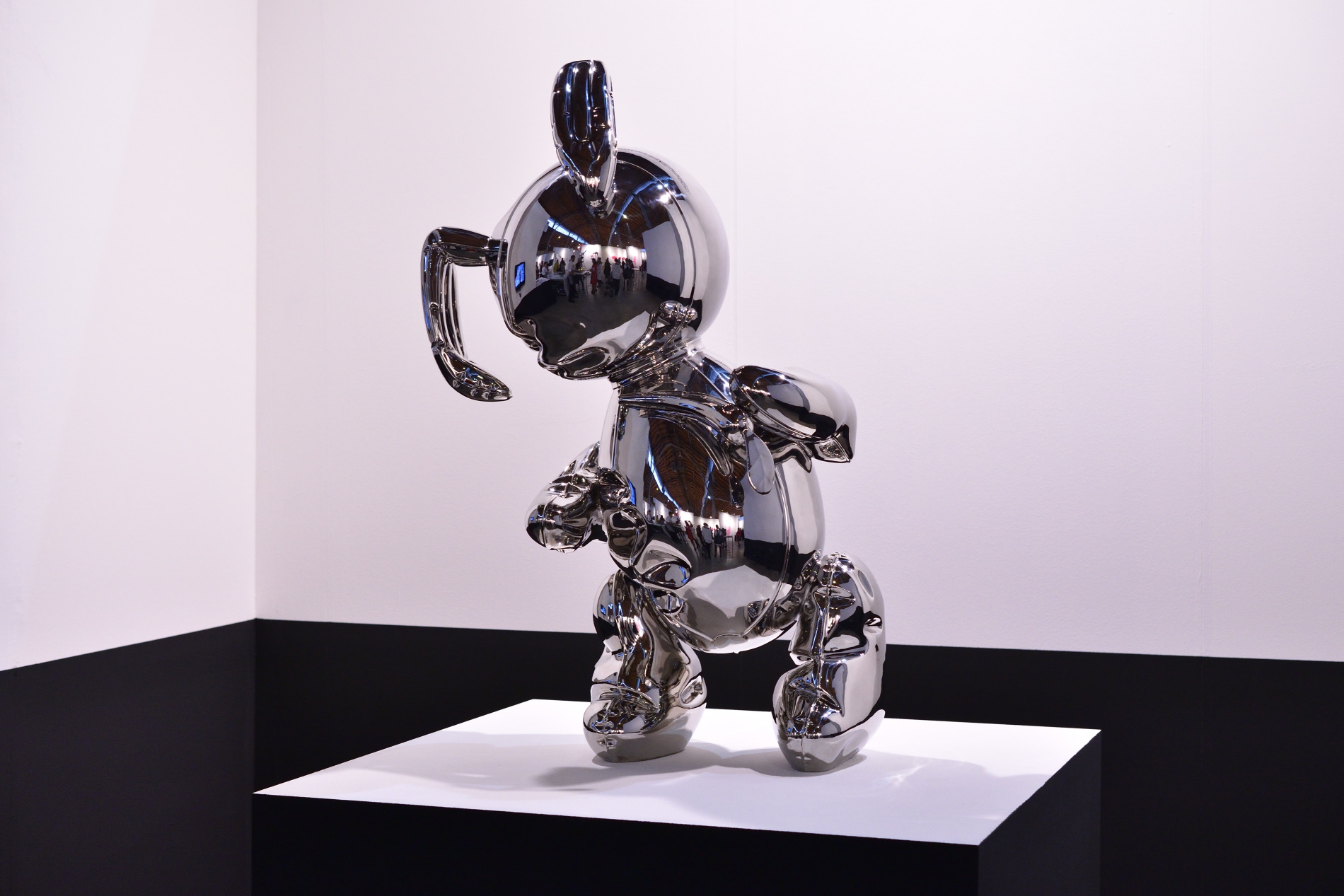 The Dutch contemporary art gallery is based in the heart of Amsterdam, near the Museumstraat. Beyond films, videos, installations, sculptures, paintings and drawings it specialises in contemporary photography. Flatland also has its own publishing-house and an art foundation.

The suggestive photos of Hendrik Kerstens immediately caught my eyes. He is a Dutch photographer and visual artist (born 24 March 1956), who started his artistic career at the age of 40. His most emblematic portraits are inspired by the Dutch masters of the 17th century, such as Johannes Vermeer, Frans Hals or Rembrandt Harmenszoon van Rijn. The range of colours, the lighting, the deep dark background, the pale skin of the models and the soft lines are characteristic of these paintings that he reproduced on photo.

His muse and his model is his daughter Paula, whom he presents on classic, realistic portraits, but with a contemporary twist. She wears objects like aluminium foil, tin cans, a towel or a lamp shade. As the gallery described it: “With his clear ambition to illustrate the dialogue between history and contemporary life, rich and sober, functional and valuable, Kerstens also accomplishes to renew and contemporize history while boosting the position and function of day-to-day objects.”

Kerstens made portraits among others for The New York Times and for Harper’s BAZAAR, including a series for the jubilee book “Harper’s BAZAAR 150 Years”. This book celebrates the anniversary with photos from the greatest artists, who have shaped the magazine over these decades.

Hendrik Kerstens has had high profile collectors like Elton John or Alexander McQueen. The British fashion designer based his Fall 2009 collection – one of his last shows – on Kerstens’ image of Paula with a plastic bag as a head-dress, using the image as his invitation for the runway presentation. 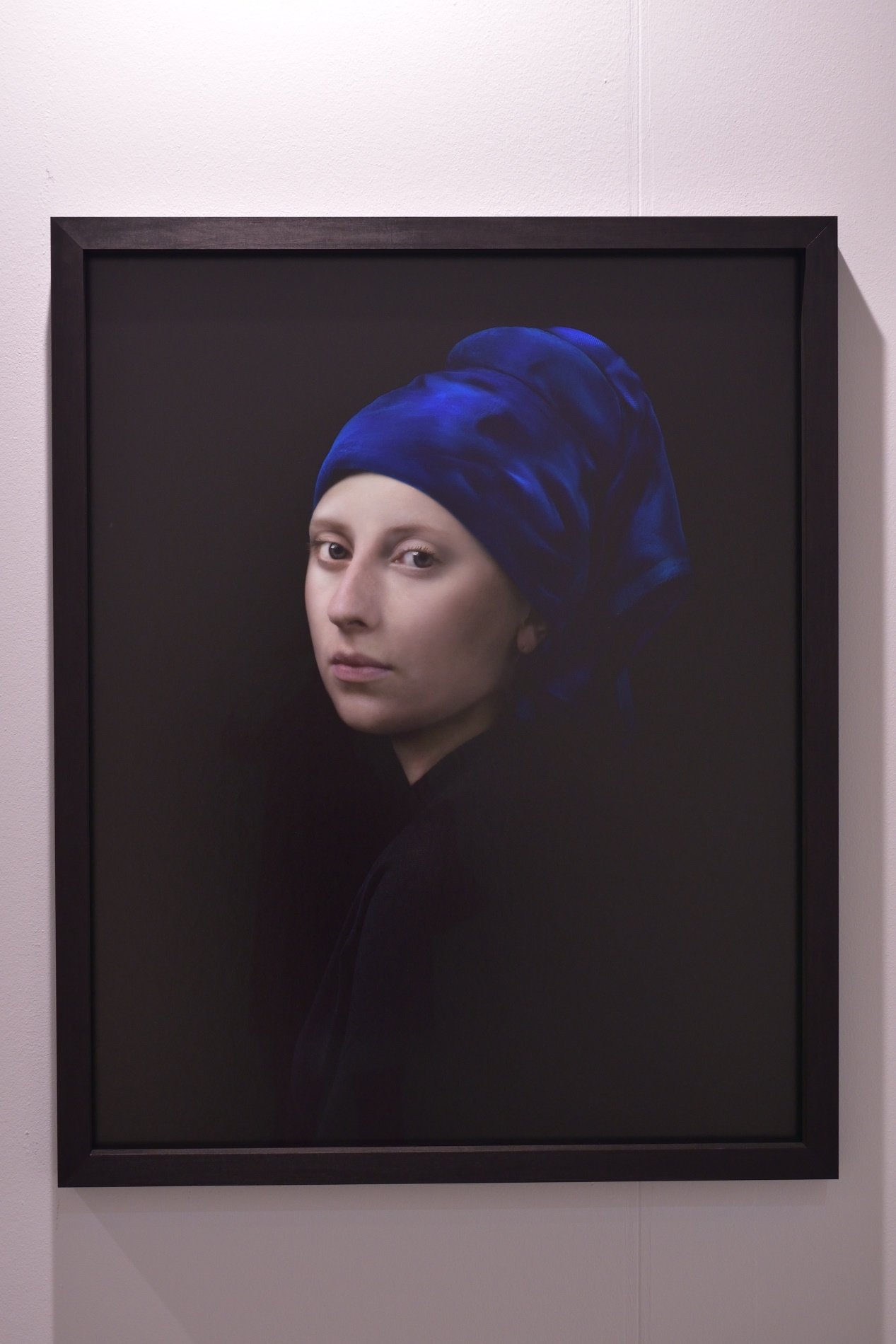 The ART+TEXT gallery based in Budapest, focuses on contemporary art, post war modernism and photography. By the way, Hungary was in the “Focus” of viennacontemporary this year, see a few photos here.

If you happen to be in Budapest, it is well-worth checking out the gallery already for its location: it is in the “House of Hungarian Art Nouveau”, a building by Emil Vidor (1867-1952) Hungarian architect, which is real eye-candy for the Art Nouveau and Secession lovers.

Andrew Mengyán is painter, a designer and graphic designer. He is from Békéscsaba, and studied at the Faculty of Industrial Design at the Hungarian Academy of Applied Arts in 1963-68. From 1990 to 2005 he was the head and professor of Cross-vocational Studies of the Norwegian Bergen State Academy of Arts and Design.

Some of his pieces come to life by illuminating them with UV light. Thanks to the photo-luminescent pigments, the acrylic paint becomes duplicated – depending on the lighting. As he says, “Through the interaction of geometric forms I could tell simple and complex “stories” of high aesthetic value that invoked observers’ capacities for fantasy and abstract thinking, stimulating their curiosity and inspiring them toward new discoveries and creations.”

György Szőnyei was born in Budapest in 1951 and he studied graphic design at the Hungarian Academy of Applied Arts. He makes graphics, fonts (typeface families like this) and paintings and has had many solo and group exhibitions mainly in Hungary and Europe. His Two Provincial (1986) and Gift (1986-90) were at the booth of the gallery.

That’s it for now. Heading to PAD London and Frieze. 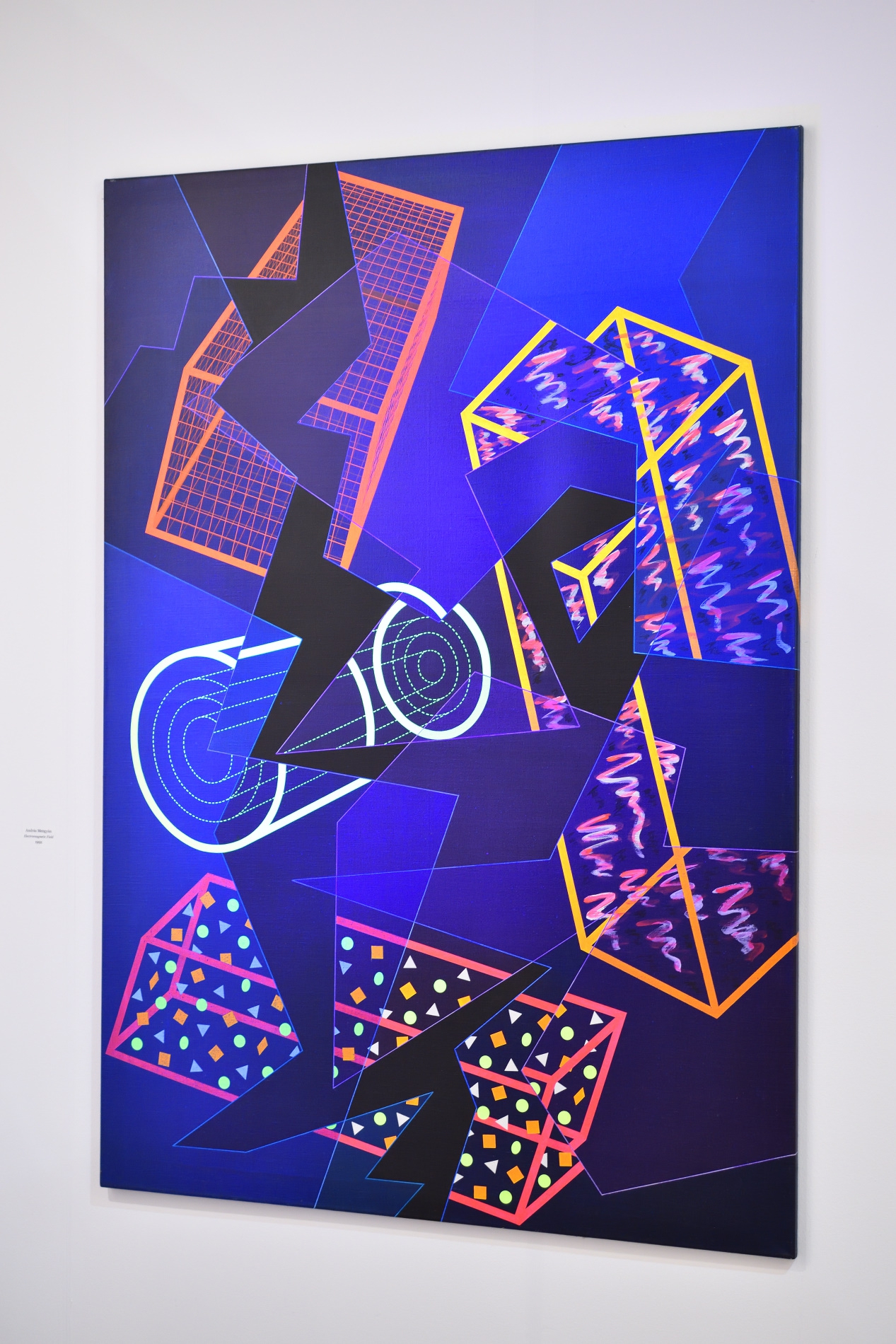 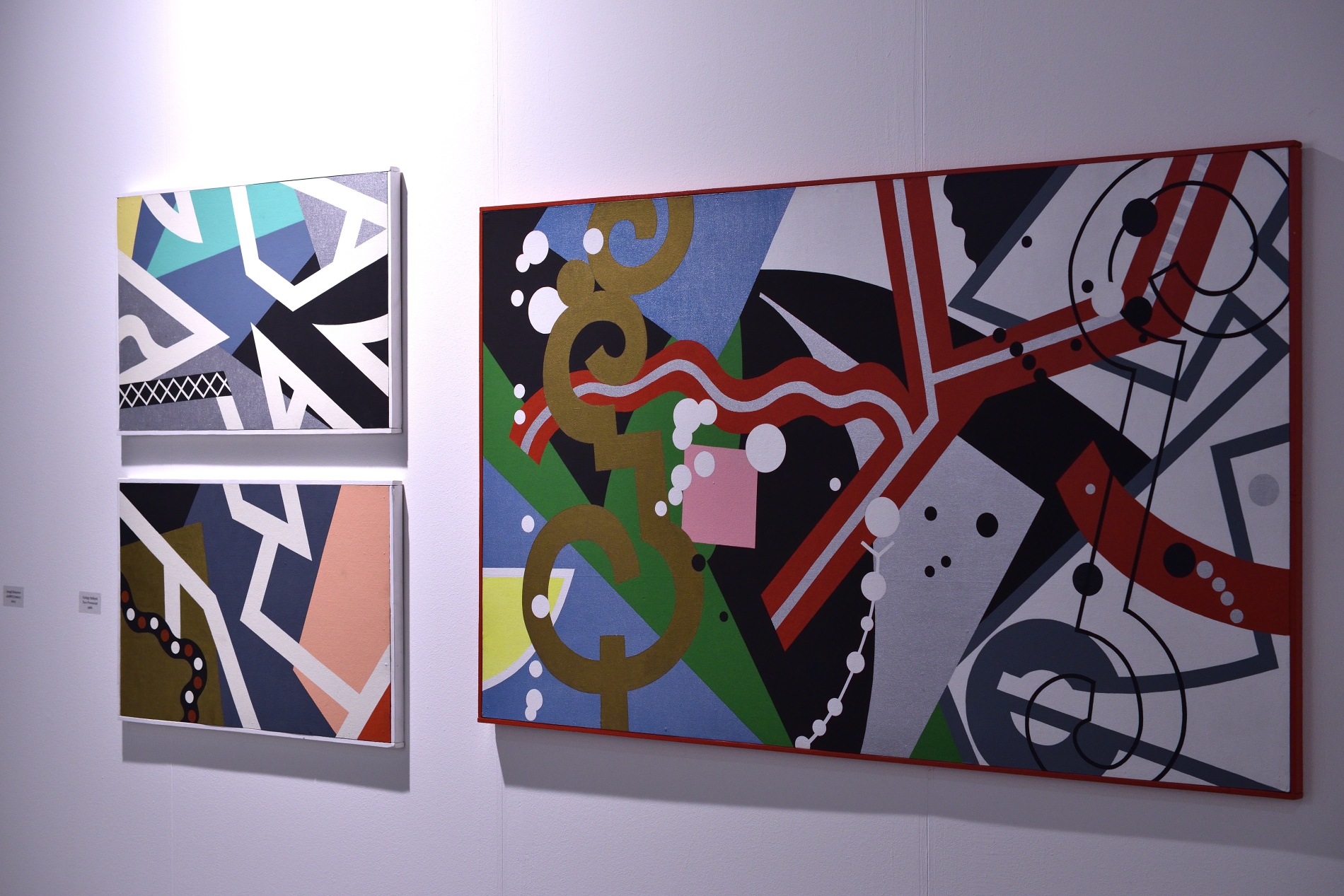 We visited other art shows this autumn. Check out our articles about PAD London, the Frieze London and Frieze Masters.

Photo credits: Loupiosity.com.
The photos were taken at the viennacontemporary art fair. All images used for illustrative purposes only. All registered trademarks are property of their respective owners.
All rights reserved.

Paris+ par Art Basel Paris+, by Art Basel is the newest fair for Modern and contemporary art, taking place October 20-23, 2022 in the French capital.Révélations Paris 2022 After many recommendations, we will visit Révélations in Paris for the first time this June. The biannual event is a prestigious showcase for the finest contemporary creations from France and abroad. Follow along with us!SEE LV in Dubai Louis Vuitton presents the SEE LV experience about the over 160 years of the Maison’s history at the Dubai Mall Fountain - as the third stop of the travelling exhibition.