Premier of the Girard-Perregaux Laureato Skeleton 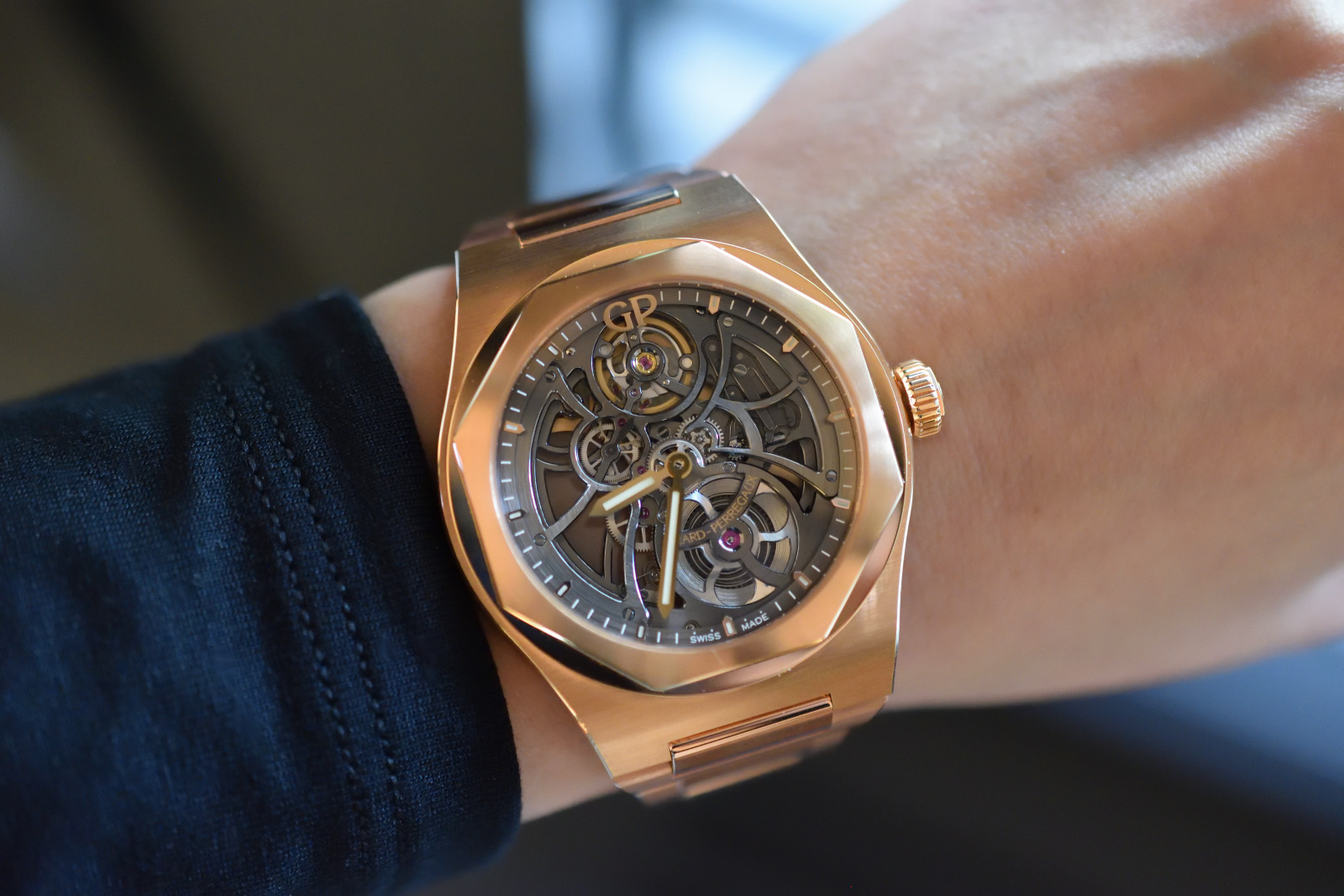 The 225th anniversary of Girard-Perregaux revived a legendary model last year, when the company presented the Laureato limited edition – the grandson of the 1995 mechanical model and the great-grandson of the original Laureato from the 70s. The move has proven to be a toe in the water, surveying feedbacks from the market and the modern forms of the 70s returned in an entire collection at the SIHH 2017. Beyond a contemporary facelift, Laureato was given the tough mission of conquering a wide circle of men and women falling for sporty watches with an extra touch of quality. The faith put in Laureato is clearly demonstrated by the fact that on 5 May (just 4 months after SIHH) another new model surfaced in the sales rooms. Antonio Calce CEO of Girard-Perregaux launched the newcomer at the Les Ambassadeurs Zurich boutique together with Joachim Ziegler, the CEO of the prestigious watch store.

The company has been creating some of the most amazing timepieces on the sunny hills of La Chaux-de-Fonds but they have always remained the choice of fine-taste connoisseurs and less of the wider audience. The speed of developments and the expanding range of models show how strongly the management and the owners of Girard-Perregaux (Kering Group) believe that the Laureato is the collection to gain broad recognition with.

The original Laureato came at a time, when the steel leisure watches pioneered by Gerald Genta emerged. They responded to a need for luxury timepieces ready to serve an active outdoor lifestyle with a steel body and an easy-to-wear shaping. Girard-Perregaux issued the Laureato in 1975 and its value proposition included the Calibre 705, the first thin Swiss quartz movement. This crystal regulator characterised the following decades and it was 20 years later when the company added the first mechanical model in the line with the calibre GP 3100. The charming and dynamic form and the thin comfortable case have made Laureato a natural companion to everyday life. The steel also made its appearance light and reserved especially with the single tone clous de Paris pattern on the dial. The way Girard-Perregaux smoothened the straight facets of the bezel by polishing its upper side slightly curved reflects the visual codes of the 1970s. The same flat front (steel, by the way) and rounded edges can be observed on the Zurich building of Les Ambassadeurs designed by Paul Steger in 1971. 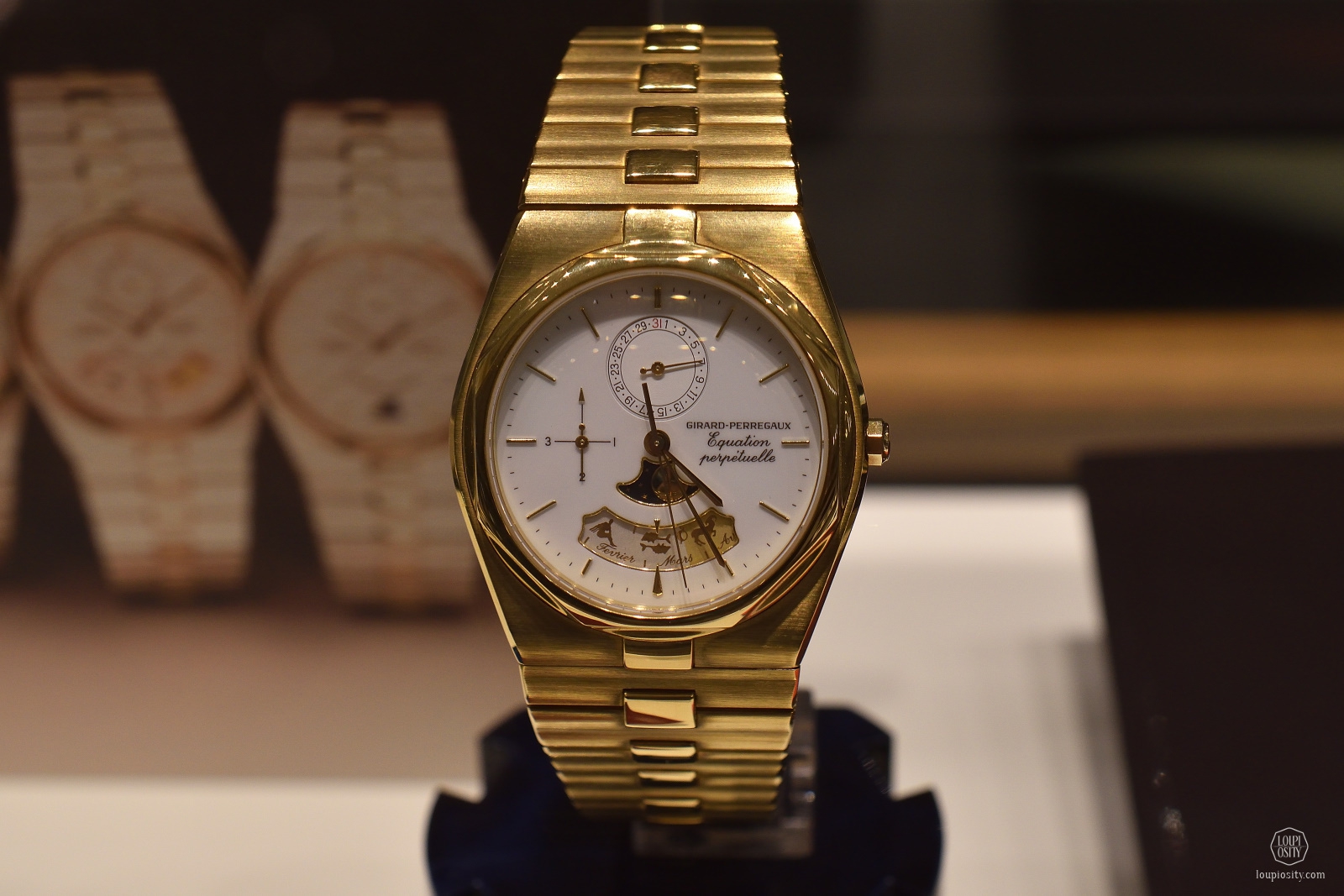 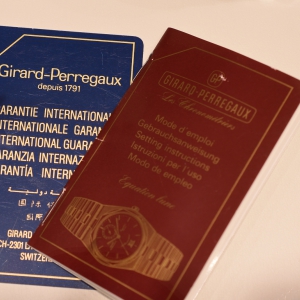 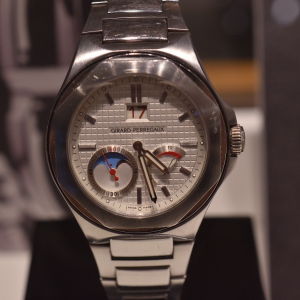 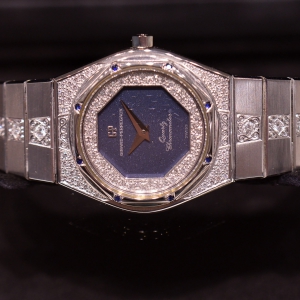 Last years’ two 225-piece limited models reinterpreted the 1995 mechanical version in 41mm steel and came with the in-house automatic calibre 3300-00300. Although the $14,300 price tag was a bit hefty, it was well received and voices expressed the desire to have the Laureato back as a full collection. The playground – just as in the 1970s – is rather competitive, therefore Girard-Perregaux decided to scale up the family immediately from entry level to mid-range and high-end models. Sizes, metals and decorations suggest that the company introduced the versatile timepiece straight as a unisex collection. The bezel, polished previously, is now a combination of a brushed upper segment and a polished lower circle meeting the polished facets of the octagon. The rest of the case is again brushed. The two smaller, 34mm and 38mm versions are offered also with a diamond-set bezel. This time the case comes in single colour and two-tone variations with steel, titanium and rose gold. The smallest is quartz just like in the beginning. The 38mm watch shares the calibre GP03300 with the 2016 models, however, it is more than $4,000 cheaper than the former, selling for $9,700 in steel. The 41mm case encompasses the new calibre GP01800, while the tourbillon timepiece has the 3Hz GP09510. All come with a metal bracelet and alligator leather. 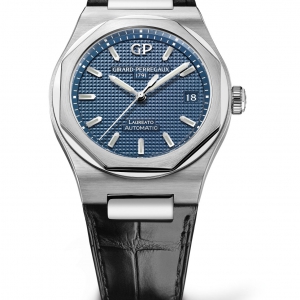 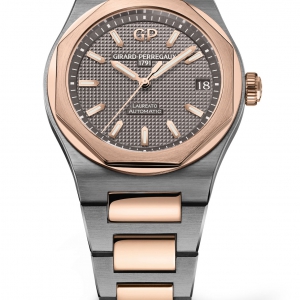 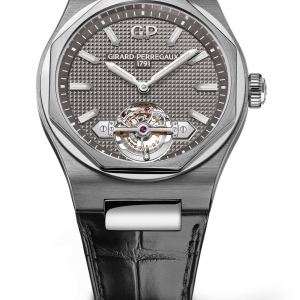 The new addition announced by Mr. Calce this time is a skeletonized version in steel and in rose gold. Built on the calibre GP01800-0006 the novelty plays with the light, shadows and curves in a 42mm diameter case. In order to capture the incoming rays of the sun, everything left from the cut out anthracite bridges and the plate was given a satin-brushed matt surface, except the shining chamfered outlines. The purest indication of power reserve is employed here: you can observe how the escapement releases the energy of the mainspring through the open barrel between 5 and 6 o’clock. Under the Girard-Perregaux initials the golden balance wheel beats with 4 Hz. The time scale is at the circumference of the dial with suspended luminescent hour markers. Naturally, sapphire is used for the case back, which reveals the golden cut-out rotor and the flip-side of the movement.

The alternation of polished and brushed surfaces goes on the bracelet, too.

Although airy, the Laureato Skeleton is a solid piece with a great movement and beautiful execution. Check it out yourself! 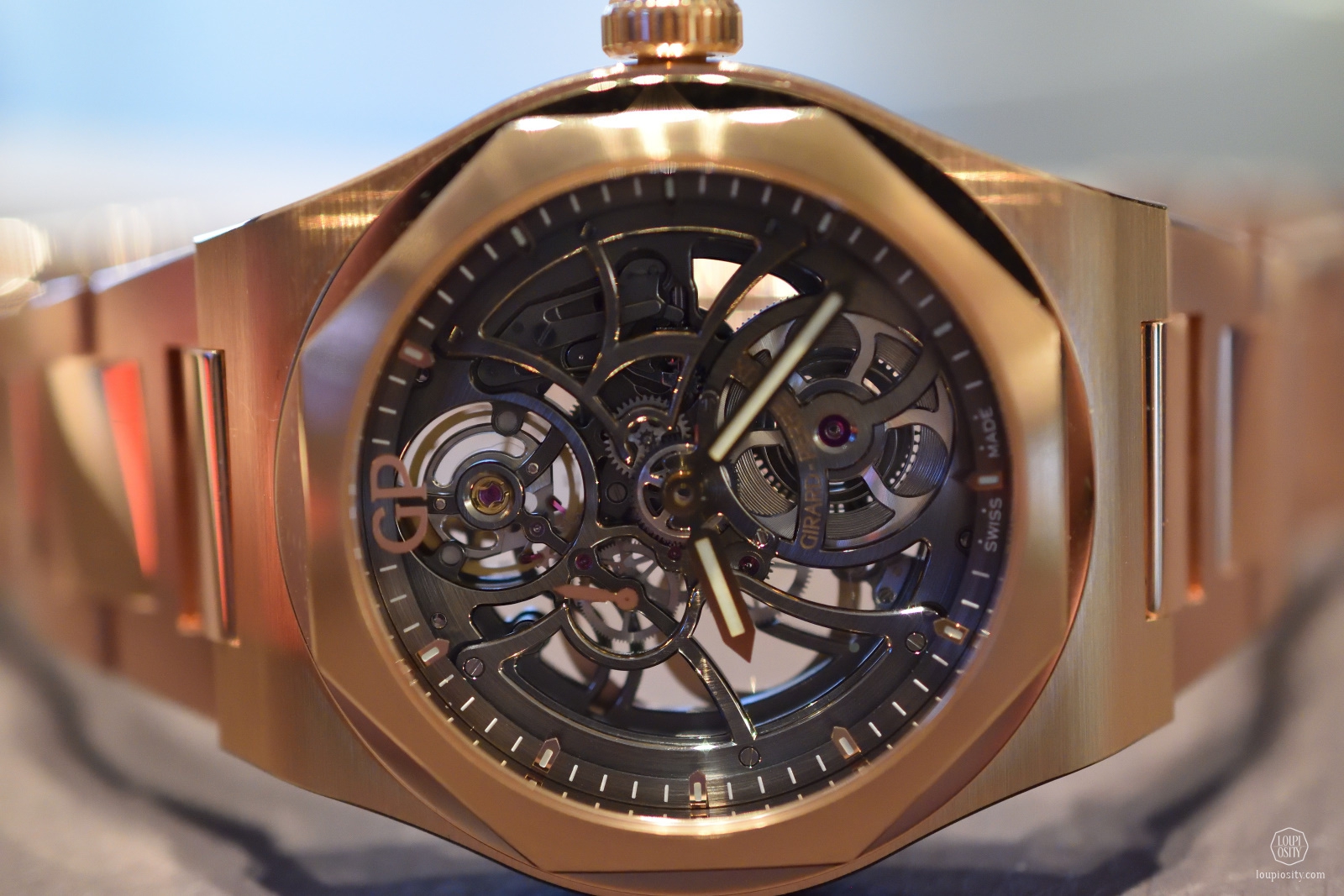 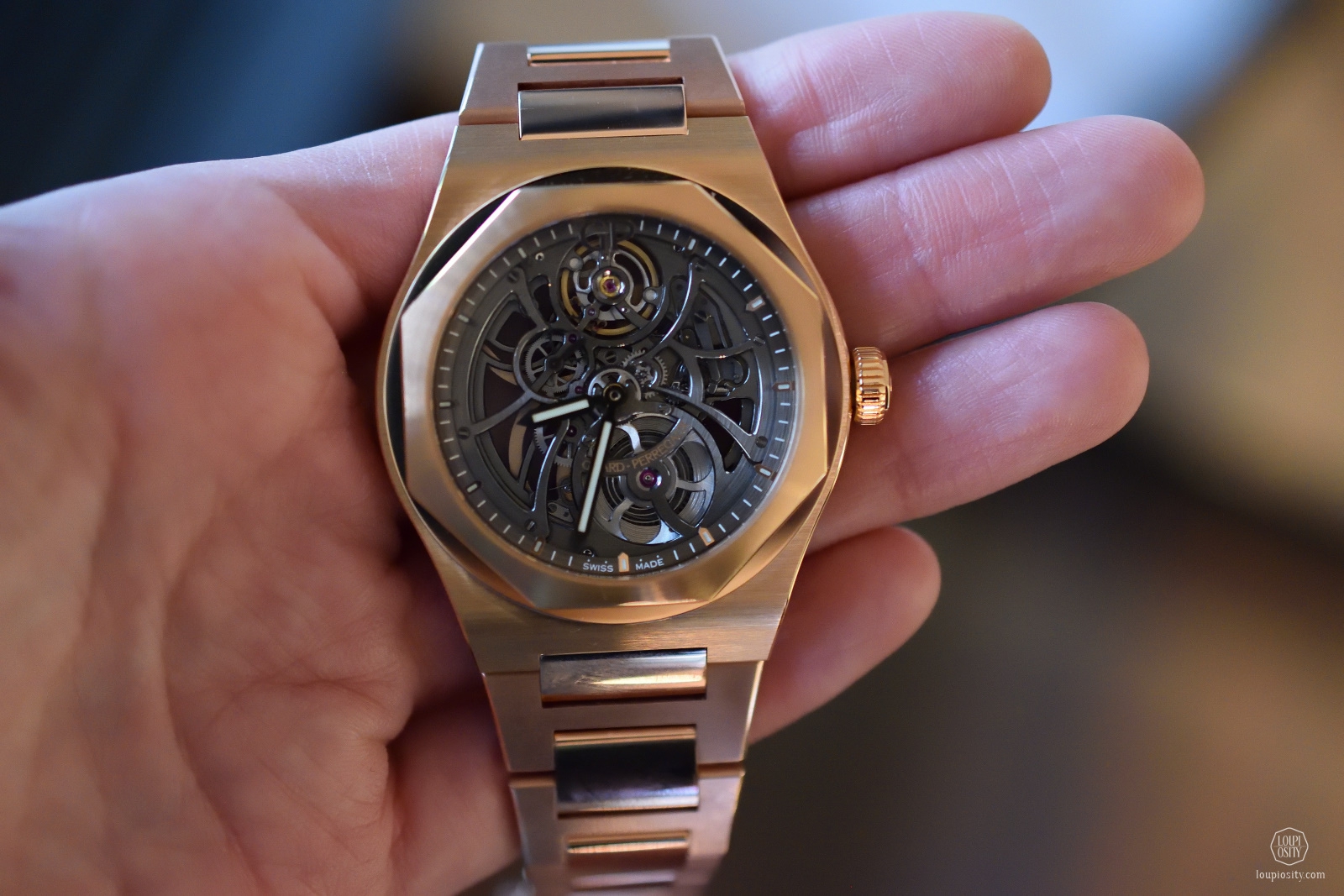 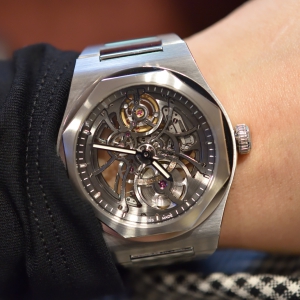 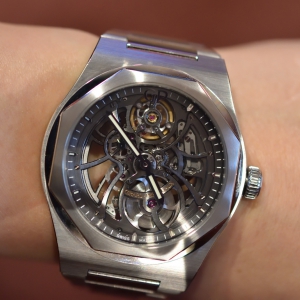 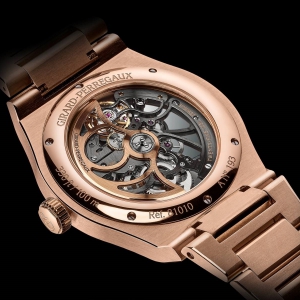 Photo credits: Girard-Perregaux, Loupiosity.com.
All registered trademarks are property of their respective owners.
All rights reserved.

Girard-Perregaux Free Bridge & Infinity Editions On the occasion of the Geneva Watch Days, Girard-Perregaux showcased the new Free Bridge model and a ‘capsule’ collection including a special edition of their existing models.Girard-Perregaux at Dubai Watch Week 2021 Girard-Perregaux celebrates it 230th anniversary this year - a big birthday to honor. The brand brought great anniversary timepieces to shine in the Dubai sun this November. Christie’s Luxury sale in Geneva, November 2022 - Part 1 Christie’s Luxury sale series returns to Geneva this autumn, including highlights from the finest wines, historic vintages and limited edition watches to the rarest diamonds. We selected a few interesting lots from the preview.