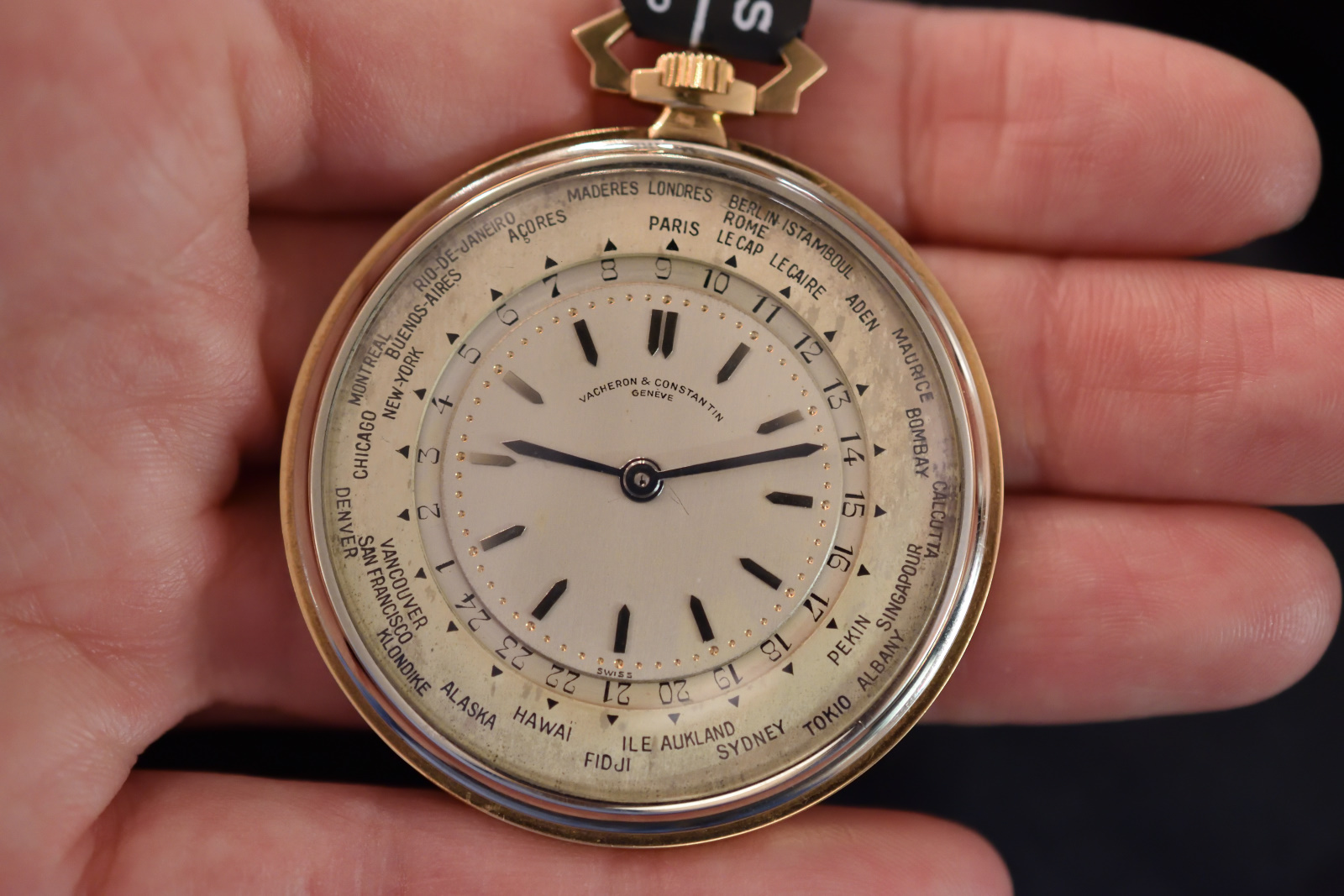 Already customary and awaited, this spring Phillips – in association with Bacs & Russo – gathers the crowd again to Geneva for their spring sale of collectible pieces. The Geneva Watch Auction 5 (GWA5) took place at Hôtel La Réserve in a double evening show by Aurel Bacs on Saturday and Sunday, 13 – 14 May.

Hard as it may sound, we selected a few examples, which moved us in particular and we dedicated a few articles to them. The following selection includes Vacheron Constantin timepieces.

One of the most beautiful chronographs I have ever seen was this Vacheron Constantin ref. 4178. Its forerunner was the reference 4177 (what a surprise) with more round lugs – on the 4178 they are more tear-shaped and faceted.

Vacheron Constantin produced the ref. 4178 from 1940 until 1964 with two different chronograph calibres: the V492 and the V434. It was a celebrated model due to its balanced dimensions and symmetry. It had yellow gold, pink gold and even stainless steel versions (including bi-metal, like this one).

The present lot has a 36mm pink gold case. 280 pieces were produced with the calibre 434. The two-register chronograph has no tachymeter scale (there are ref. 4178 pieces with tachymeter scales). The silver opaline dial and a discreet outer blue scale enhance the clean and sophisticated look even further. 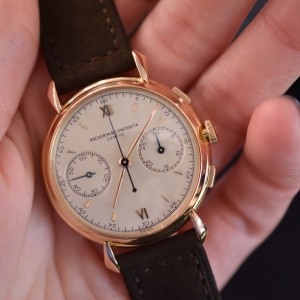 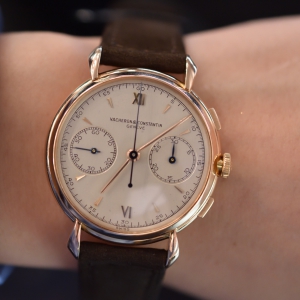 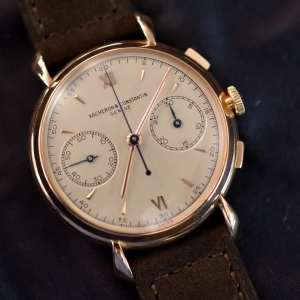 This is an incredibly rare, attractive and historically important yellow gold tourbillon pocket watch with enamel dial and Guillaume balance. It was awarded the First Prize by the Geneva Observatory after the trials in 1932 and 1944.

Up until 1967, the exact unit of a second was defined by observing the rotation of the Earth. Therefore, astronomic observatories have not only scanned the sky for the extra-terrestrial, but they also determined time on Earth. These institutes also tested how accurately timekeeping mechanisms perform and offered a testing ground for research on chronometry.

The Geneva and the Neuchâtel Observatories were among those who measured the calibration of timepieces via a complex and time consuming attestation process. Rigorous tests of the nominated pieces were performed even before the actual competitions.

Vacheron Constantin submitted its watches already in the first competitions around 1872. This lot, a yellow gold tourbillon pocket watch, obtained the first prize in 1932.

The movement was regulated by one of Vacheron Constantin’s master watchmakers, Edmond Olivier. Another astonishing timepiece he regulated was the split-seconds minute-counter chronograph with perpetual calendar included here, which won the first prize at the Geneva Observatory trials in 1934.

These watches were not intended to go on sale, but more to underline the brand’s outstanding technical abilities, Therefore, it is very rare to find an observatory movement encased at the time of its creation. The present watch was later sold in 1946 to C.D. Wales as evidenced by the engraving in the inner cover. 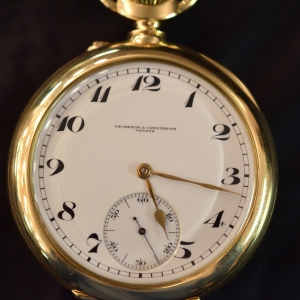 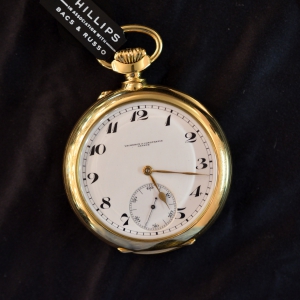 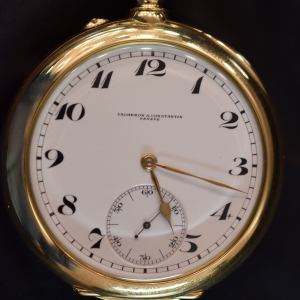 In the past few years world time watches are having a moment – many brands launched their own contemporary interpretations, like the Chopard LUC Time, the Jaeger-LeCoultre Geophysic Worldtime, the Louis Vuitton Escale Time Zone, the Patek Philippe 5930G World Time Chronograph or the Vacheron Constantin Overseas World Time, just to name a few.

The world time complication is credited to the famous watchmaker Louis Cottier from Geneva. It is interesting to know that already his father Emmanuel Cottier, employed by Vacheron Constantin, had worked on the development of the world time complication. Louis was born on September 28, 1894 in Carouge. He attended the Geneva School of Horology and later he worked as master horologist in several local manufactures. In 1931, he made a watch showing universal time (with 29 world cities) for the Genevan jeweller Baszanger. The model had the hour and minute hands at centre, linked to a rotating 24-hour ring, and bordered by a fixed outer dial ring with the names of different cities. The local time was placed at 12 o’clock with the hours/minutes hand set at local time, the watch would then display the correct time in both hours and minutes for every time zone in the world simultaneously. Around the 50s he developed it further and implemented a two crown system.

Lot 184 is reference 3372 from 1933 and it is a white and rose gold 45mm pocket watch in amazing condition. The timepiece is a beautiful object in itself, but it is also an important milestone in fine-watchmaking and it has been a benchmark for emerging world time watches. 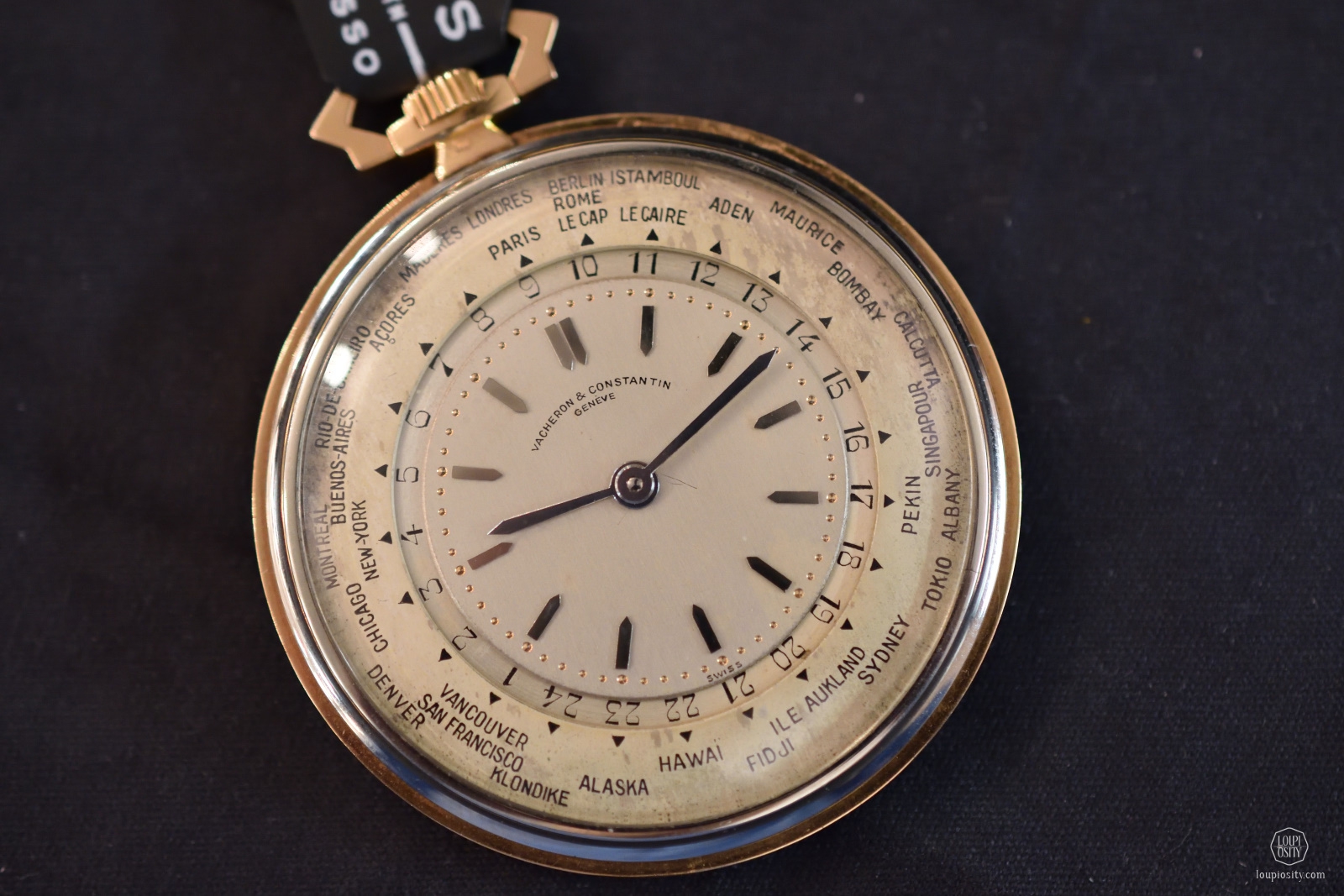 The years of recovery after the WWII brought a new creative surge in many areas of life. Vacheron Constantin designed new shapes for its watches, like a curved square timepiece (4737) in 1952 or the Aronde wristwatch with domed glass in 1954.

The above mentioned reference 4737 was nicknamed by the Italian collectors “Cioccolatone” due to its resemblance to a square of chocolate. It was made in different versions, with or without date, with different movements and also a model with full calendar and moonphase functions. This particular watch shape reappeared in 1998 in the Toledo models.

Lot 208 is made of yellow gold and with its dimensions (36 mm x 43 mm) it was considered as an oversized model at that time. It included the automatic calibre 477/1 which was produced only for 2 years between 1950-1952 (but encased in other references too in the subsequent years). 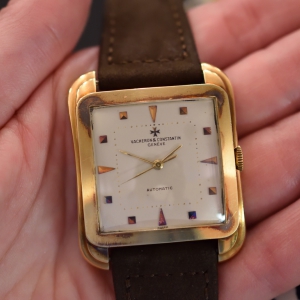 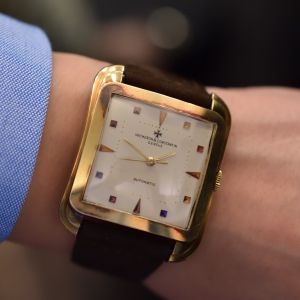 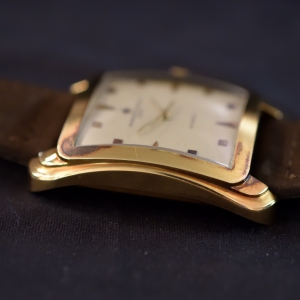 Phillips - The Geneva Sessions Besides the brands, the watch department at Phillips auction house also showcased some of the world's finest collectors' watches at the Geneva Watch Days.A Masterpiece on your wrist Vacheron Constantin is auctioning a Les Cabinotiers watch at the ‘Bid For the Louvre’ auction organised online from December 1st to 15th by the Louvre Museum and Christie's, with the support of Drouot.Vacheron Constantin Historiques 222 Vacheron Constantin's Historiques collection is now enriched by the 222, a contemporary re-edition of the Maison’s iconic 1977 ‘Jumbo’. We saw the novelty at Watches and Wonders 2022.