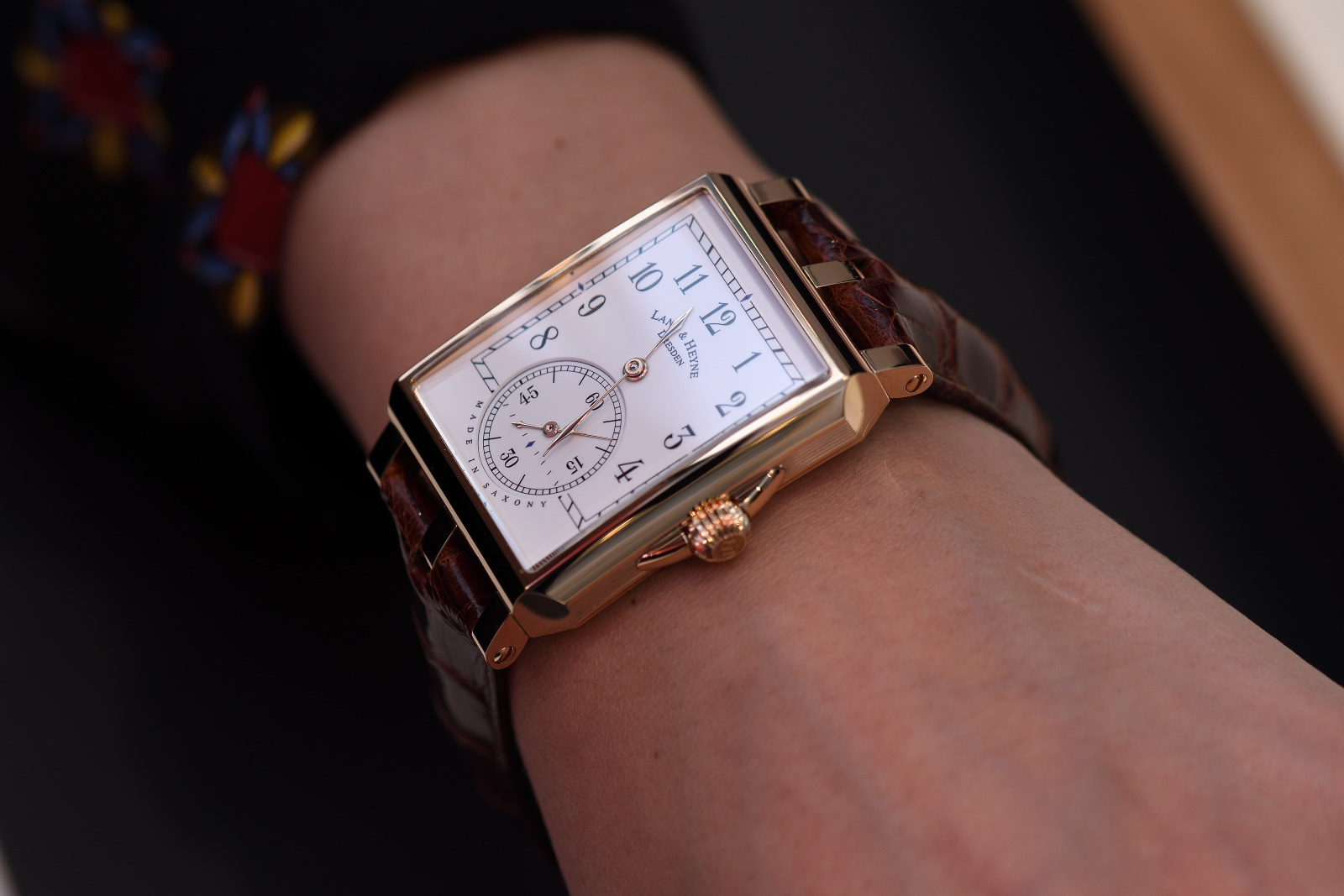 Although it is a tough challenge to work off the handicap the strength of the “Swiss” brand poses in fine watchmaking, I feel that the conscious development of the German watchmaking companies has resulted in a pretty competitive situation. Precision, technology and genuine design are at home in Saxony, and the focus has clearly shifted to gain independence from Swiss suppliers while keeping operations on economical levels.

Beyond the big players like A. Lange & Söhne, Glashütte Original and Nomos Glashütte, there are “hidden gems” in the region. The same roots running deep in Saxonian watchmaking traditions nourish the leafs of Lange & Heyne, but they chose to work on a much smaller scale and with a more old-fashioned manufacture style.

Founded in 2001 in Dresden by Marco Lang and at that time watchmaker apprentice Mirko Heyne, the workshop makes timepieces with a distinct classical flavour that reflect the taste of the 5th generation watchmaker, Marco Lang (Heyne joined Nomos Glashütte as a watchmaker in 2002, but the company’s name remained the same). He is more an engineer than a businessman, who defined his company around what he loves and in the size that allows him to express his creativity and is still comfortable to manage. The high quality 50-60 units Lange & Heyne makes annually at an average of 40-50 thousand euros each, find its refined clientele reasonably securely independent from global economic situations.

Marco Lang has been a member of the Académie Horlogère des Créateurs Indépendants since 2005, the idea of which is to preserve and encourage the pure craft and highest level of creativity in mechanical watchmaking. As the name suggests, the members of the “Academie” are independent watchmakers, nominated and selected by the committee.

Being from Saxony, Lang & Heyne chose a rather cool naming convention. Models are called after historic personalities from the House of Wettin, one of the oldest families of the German nobility.

“Haus Wettin” is a dynasty of counts, dukes, prince-electors and kings that once ruled territories in the present-day German states of Saxony and Thuringia. It is interesting to know that there is big mural about these rulers in Dresden, on the outside of the Stallhof, on Schlossplatz Square. The Fürstenzug (Procession of Princes) is the largest porcelain mural in the world, made from the region’s famous Meissen porcelain.

The first models were Friedrich August and Johann, with simple three-hand time functions delivered by the beautifully finished Calibre I. Kings, counts, princes, margraves and landgraves have followed with more shine and mechanical wisdom, such as Augustus I. incorporating a complex event calendar (Calibre VII) named after the 16th century Elector of Saxony. 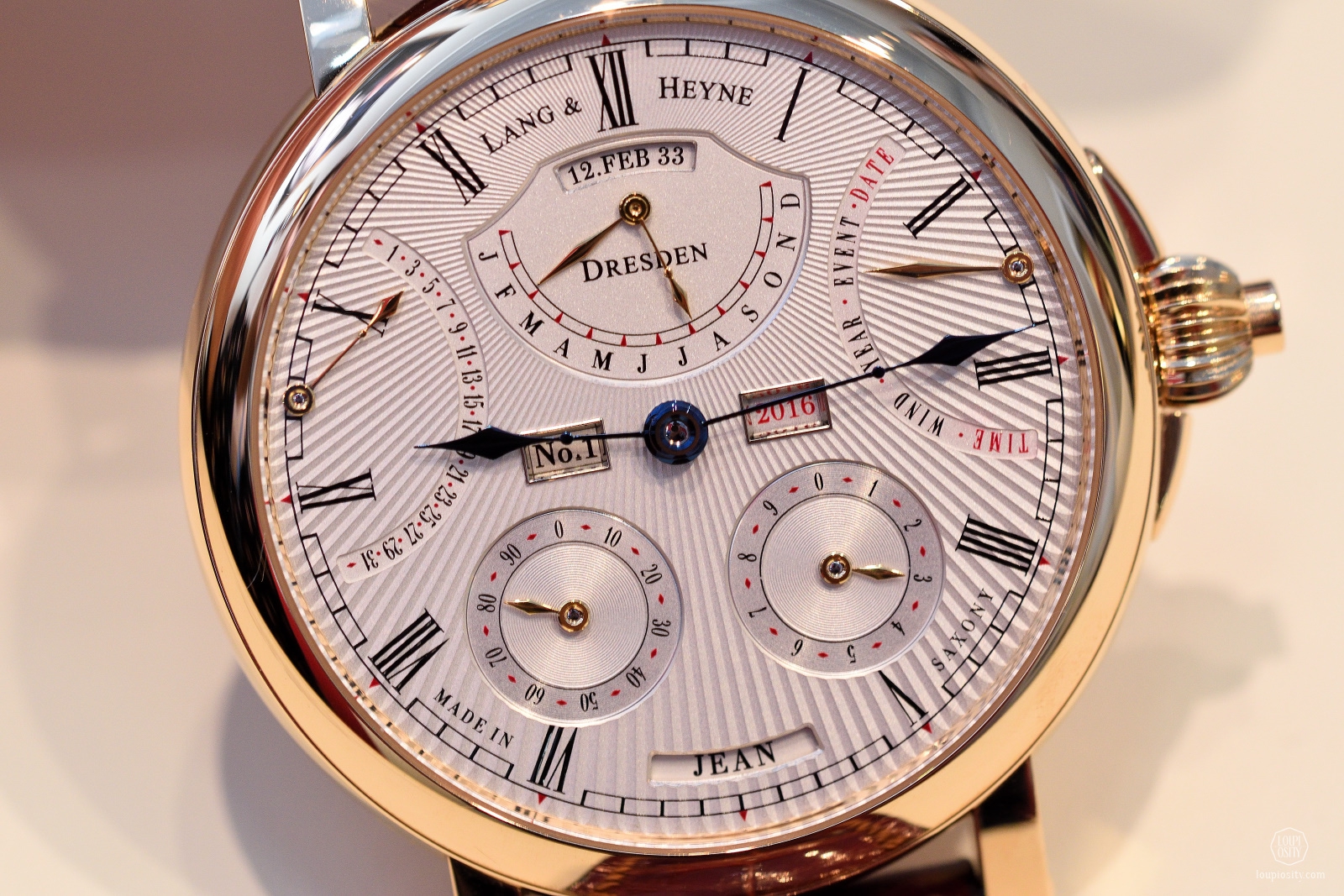 Before the GDR times, Saxony had a local ecosystem of specialized suppliers, similar to what Switzerland possesses today. Marco Lang has been contributing to the re-establishment of this network of companies in Germany. In April 2013 he co-launched Uhren-Werke-Dresden (UWD), a local parts and movement supplier, together with the Munich-based investors Tempus Arte. Part of the deal was that Lang & Heyne and UWD (as well as Leinfelder Uhren München) have become part of the Tempus Arte Holding. 20% of UWD’s production goes to Lang & Heyne as raw parts (screws and pins), which leaves the 15 watchmakers of the manufacture to focus on finishing, assembling and producing other parts in-house. The spare time allows an increase in production numbers – Mr. Lang’s goal is to reach 200 pieces a year.

The 11th lord from Saxony rode into the booth of Lang & Heyne at Baselworld 2017. Georg the Bearded (1471-1539) was the Duke of Saxony between 1500-1539. He was said to be a well-educated, outstanding, high-minded ruler and a vigorous opponent of the Lutherans in the early years of the Reformation.

The timepiece named after the upright duke is also a characteristic phenomenon. It is the first watch in Lang & Heyne’s portfolio that is not round shaped, but rectangular, bending gently towards the curves of the wrist. With square timepieces proportions are even more important – it determines not just the look but also comfort. The case is 32mm wide and 40mm tall with a thickness of 9.4mm and it feels just right on the wrist. It can be ordered in three precious metals, 18ct rose and white gold, or 950 platinum.
Lancet shaped blued steel hands circle over a square railroad minutes track on the bright white enamel dial. Seconds are shown in a big eccentric second sub-dial. 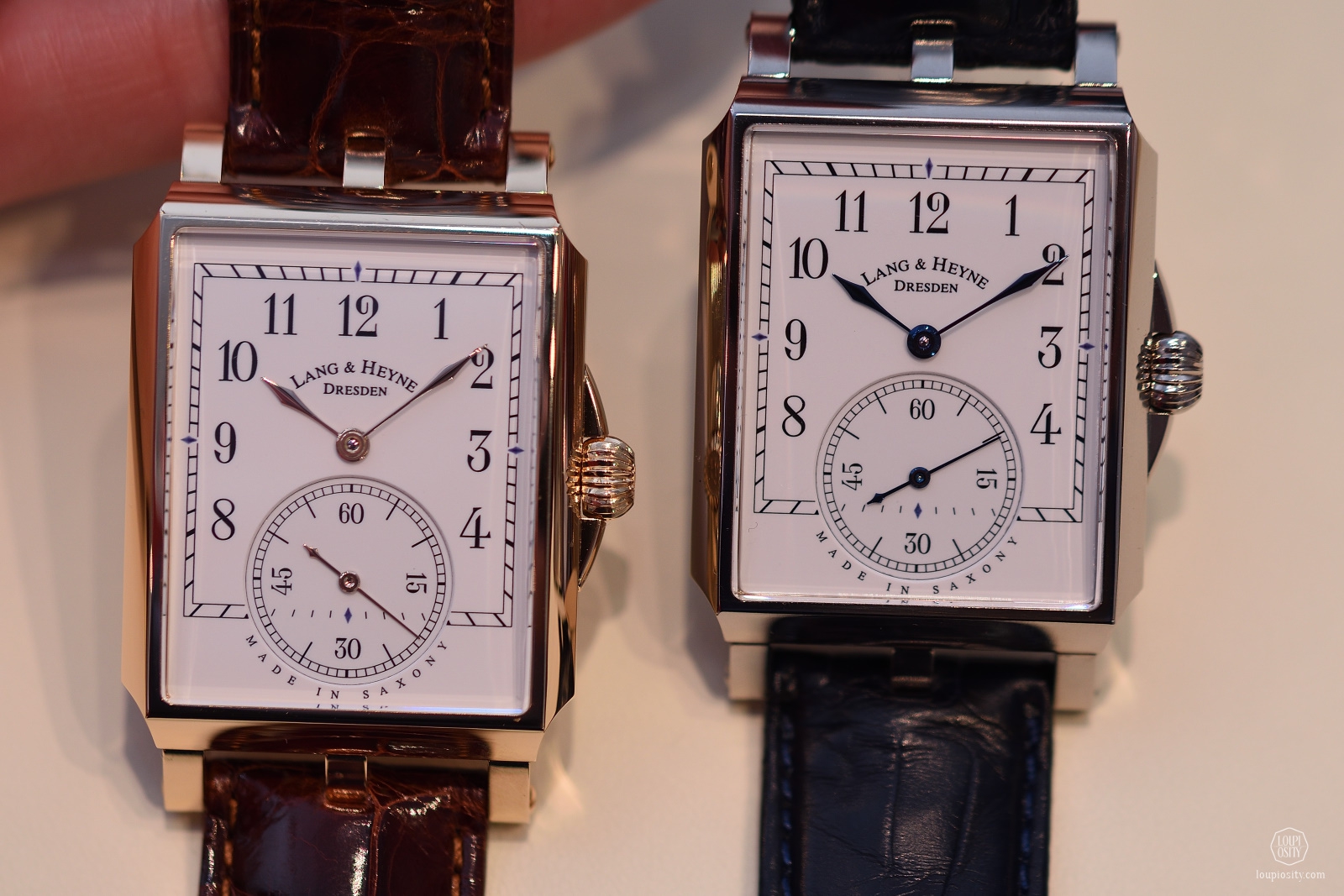 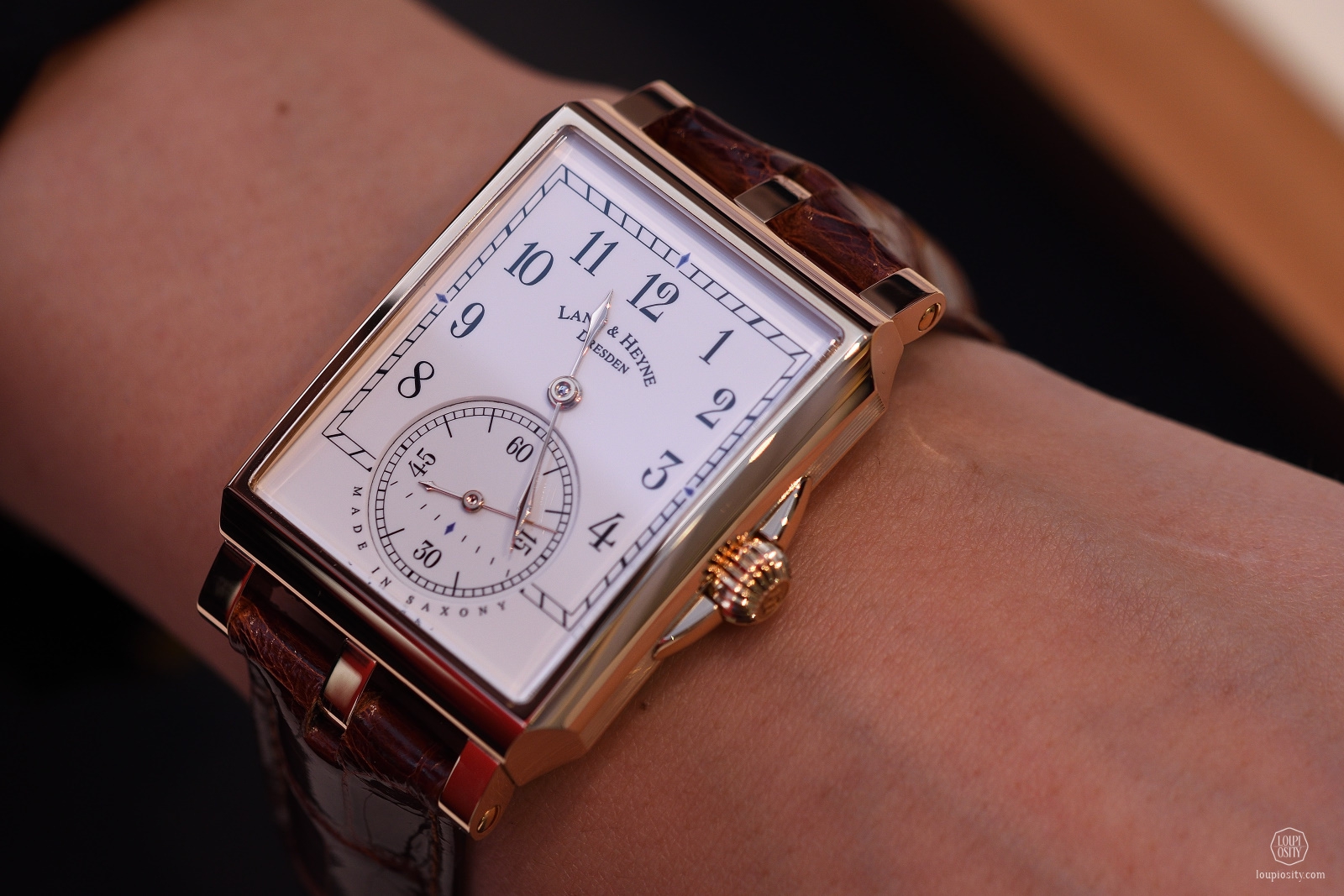 Georg is remembered as an industrious and unwearying leader. These are the qualities of Calibre VIII too, which runs at a pace of 2.5 Hz for 55 hours with a full wind. On top of its precision it is also beautiful. The golden gear train runs diagonally in the case. The snailing on the barrel, the domed steel bridges and cocks, and the alternation of the polished and the matte surfaces enhance the three-dimensional effect.

The dedication of the individuals working at Lange & Heyne is encapsulated within the case of every piece that leaves the workshops. George is an unusual model in the company’s portfolio, but its entire being whispers elegance. 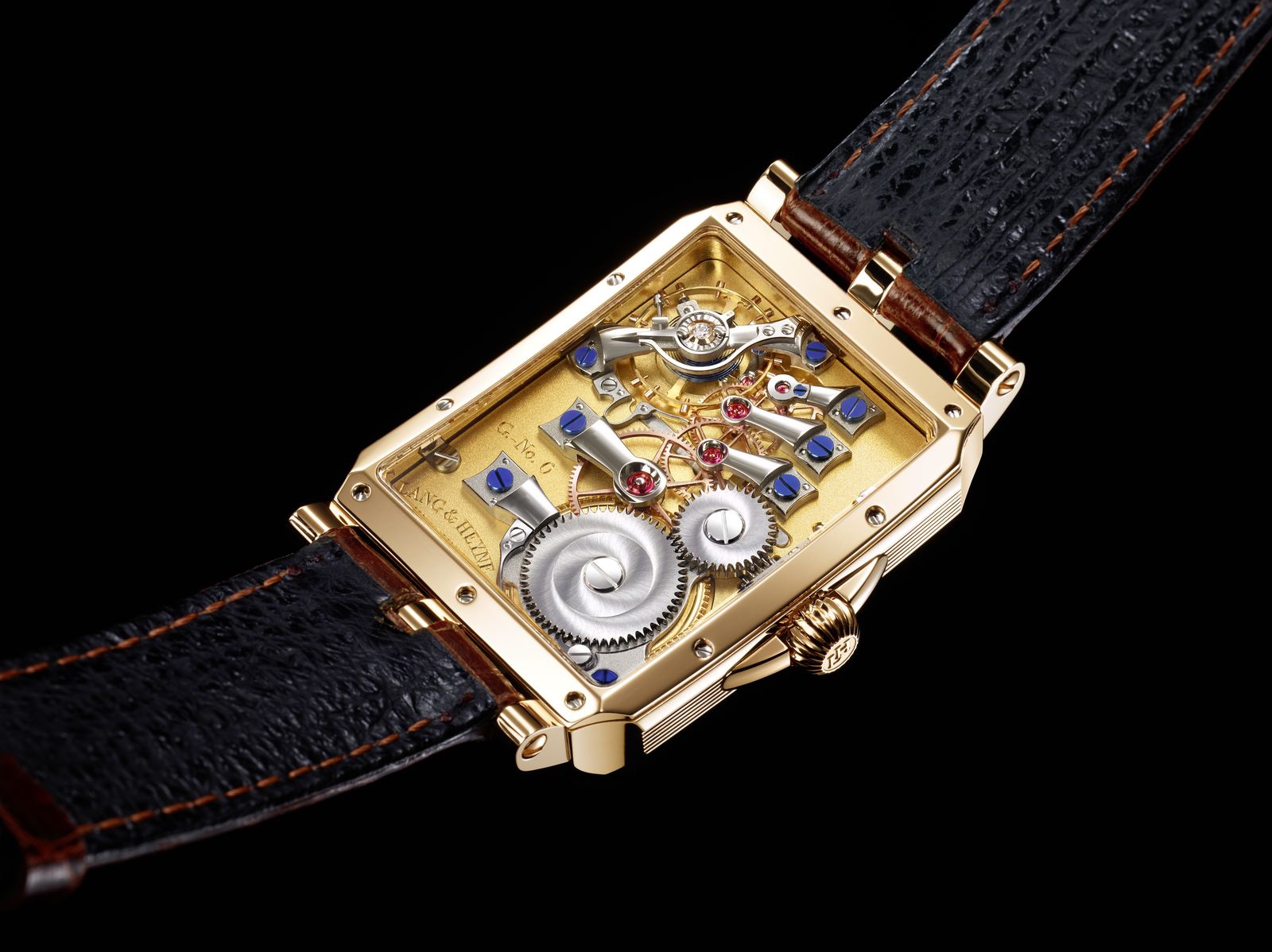 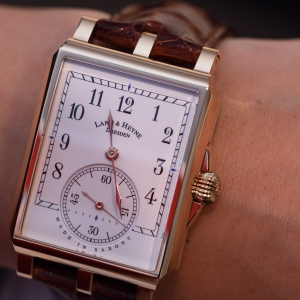 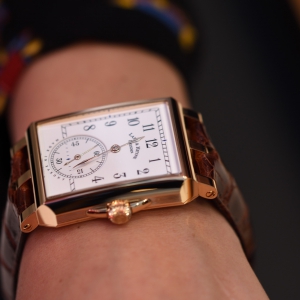 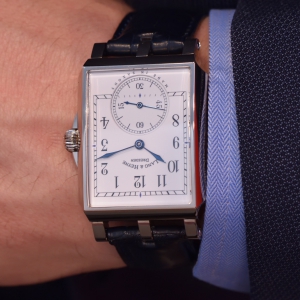 Equal Pay Day at Nomos Glashütte This March sees the International Women’s Day and the Equal Pay Day in Germany—both serve as reminders that discrimination still exists. Approaching these, NOMOS Glashütte invites all to improve gender equality by setting an example themselves.NOMOS Glashütte Tangente neomatik platinum gray NOMOS Glashütte just released the Tangente neomatik platinum gray, available in diameters of 35 and 39 millimeters – an elegant new addition to the most successful watch line by the German brand.New views An overview about a few upcoming finewatchmaking events - hopefully all in real life - follow us along.