Pillars of the heavens 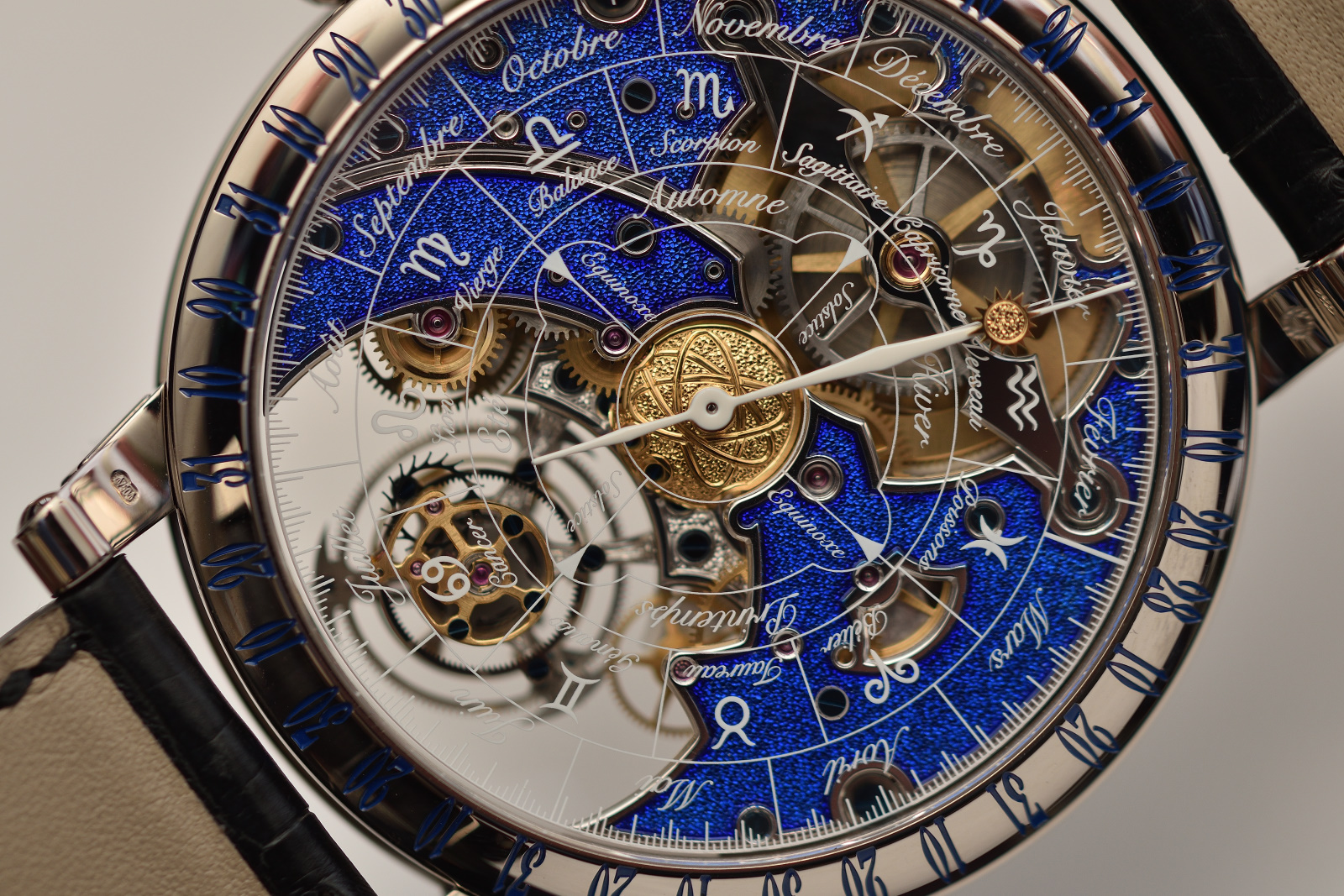 At the intersection of arts, technology and architecture is where Bovet feels best. On their intimate annual presentation in the Beau Rivage Hotel, Pascal Raffy introduced the new collection with a moving speech praising his “artisans”, whose desire and abilities to fly with the speed of his imagination has resulted in pieces with heart and soul. Always characteristic and always original these miniature universes capture the mind by gradually unveiling their depths to the viewer. The layers of gears, lacquer, enamel, engraving, crystals and dials always tell a new story. 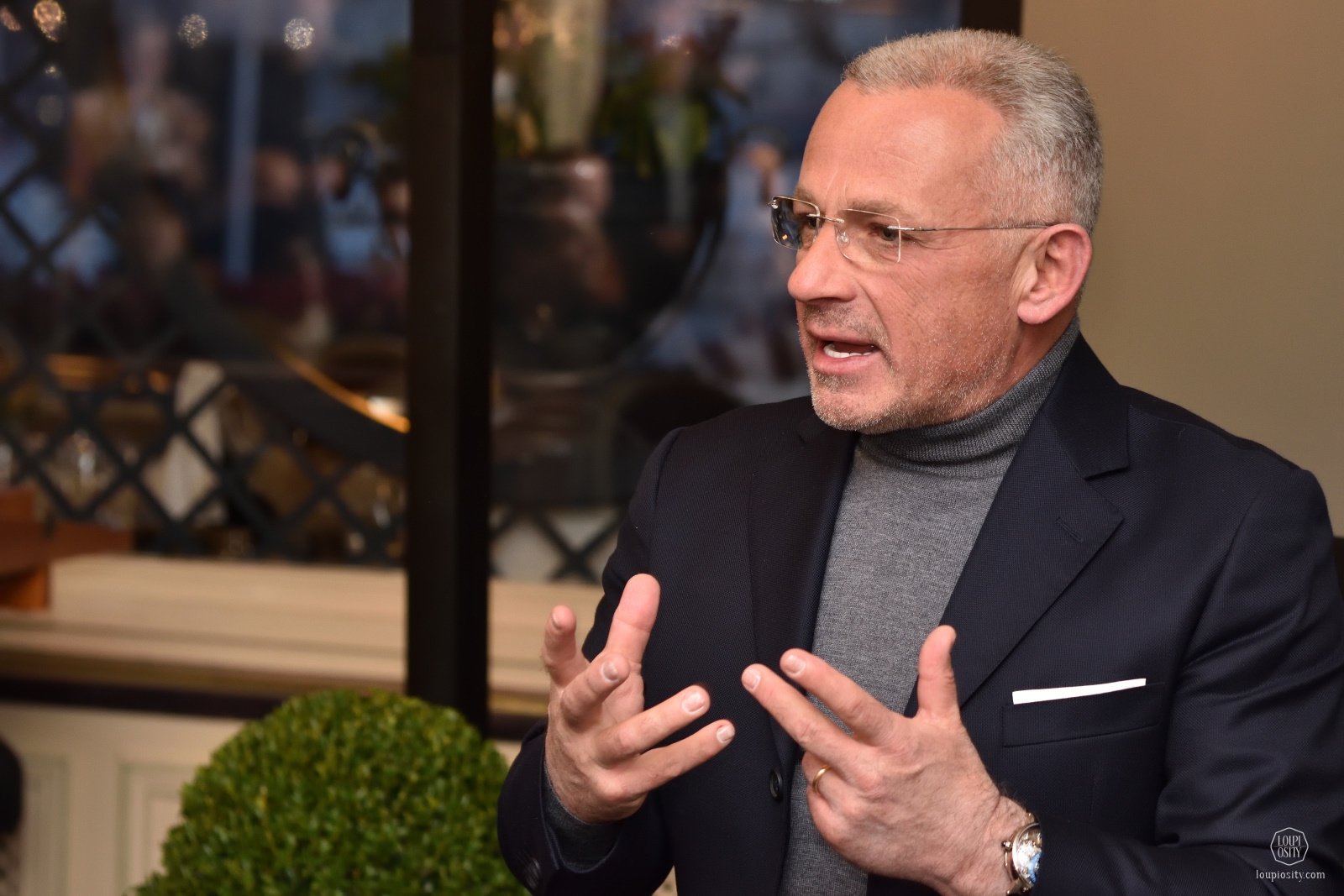 Last year, Bovet presented unique art pieces created together with enamellist Ilgiz Fazulzyanov, the high-tech and extremely light flying tourbillon Ottantasei by Pininfarina and the Récital 18 referred to as The Shooting Star. The latter combined the quintessence of Bovet: complex mechanics, airy structure and an eye pleasing look in every detail. It felt like the Earth, the Moon and the gears that eternally revolve them were held by the graceful tourbillon bridge.

In 2017, the play with structure and universe continued in the Récital 20 Astérium. Waves of the Fleurisanne pattern appeared on the Virtuoso VIII model and Bovet presented an everyday piece in the Miss Dimier collection.

“The pillars of the heavens quake, aghast at his rebuke” – stands in Job 26:11. Not only the Old Testament, but Māoris, Egyptians and Greeks also believed that something – pillars, mountains or Atlas the Titan standing at the western edge of Gaia – support the heavens. After the establishment of the spherical Earth in the 3rd and 4th centuries BC by the Greeks, Medieval scholars adopted the idea of celestial orbs hosting the known planets, and the firmament, the solid outer most orb, embedding the stars. The perfection of Aristotle’s heaven was dismissed by Giordano Bruno in 1584, who proposed an infinite universe with stars being suns themselves with their own planetary systems.

The mythical pillars and the entire firmament appear explicitly in the new Astérium timepiece of Bovet. By keeping the stars high up the pillars let a glimpse underneath. The colour selection together with the ambient light emphasizes the multi-level architecture, which calls for discovering the secrets of gaps and elevations one-by-one. The alternating usage of red and white gold and titanium, the white and blue decorations, the mirror polished and chiselled surfaces raise the effect even further. What’s more, Bovet has continued to use the inclined case introduced in the Récital 18 Shooting Star and made the movement climb up from the plains of the main plate up to the domed dials on the top. Looking at this fabulous theatre from 6 o’clock it gives the impression of the terraces of Babylon’s Hanging Gardens. 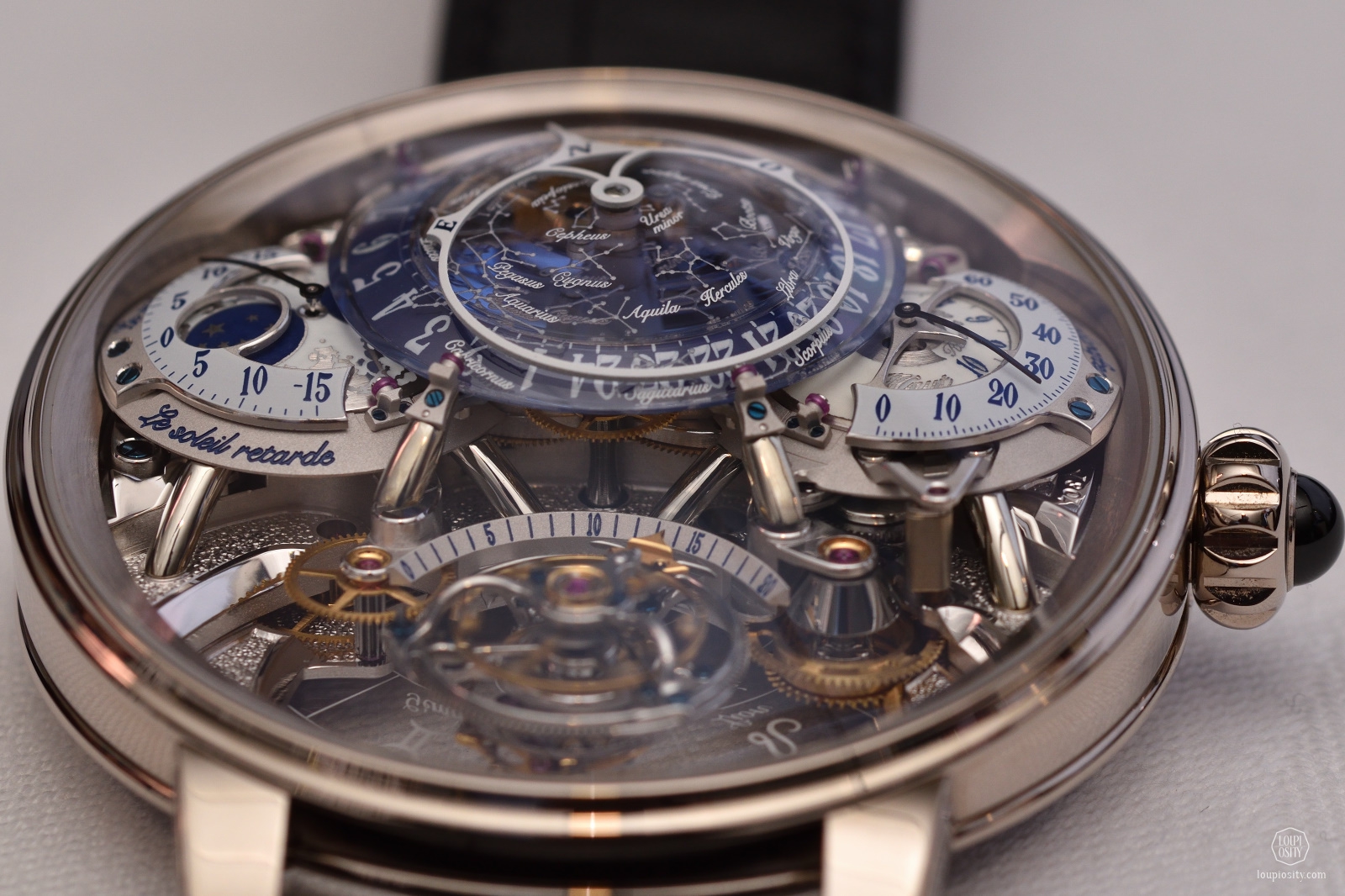 The Calibre 17DM02-SKY is limited to 60 pieces only, and by the time of the January announcement most of them have already found the connoisseur whose collection they will belong to. The main driver during the development was to represent the night sky on the top dome exactly as it is viewed from the Earth. Therefore, the movement incorporates a sidereal calendar, which precisely follows the duration of the terrestrial orbit: 365.25 days. Stars and constellations appear engraved on the blue quartz crystal and they glow in the dark thanks to the applied Super-LumiNova®. The ones visible at the time of reading are within the elliptical area of the hand. The same hand shows the hours on the fixed circumference with 24 graduations. 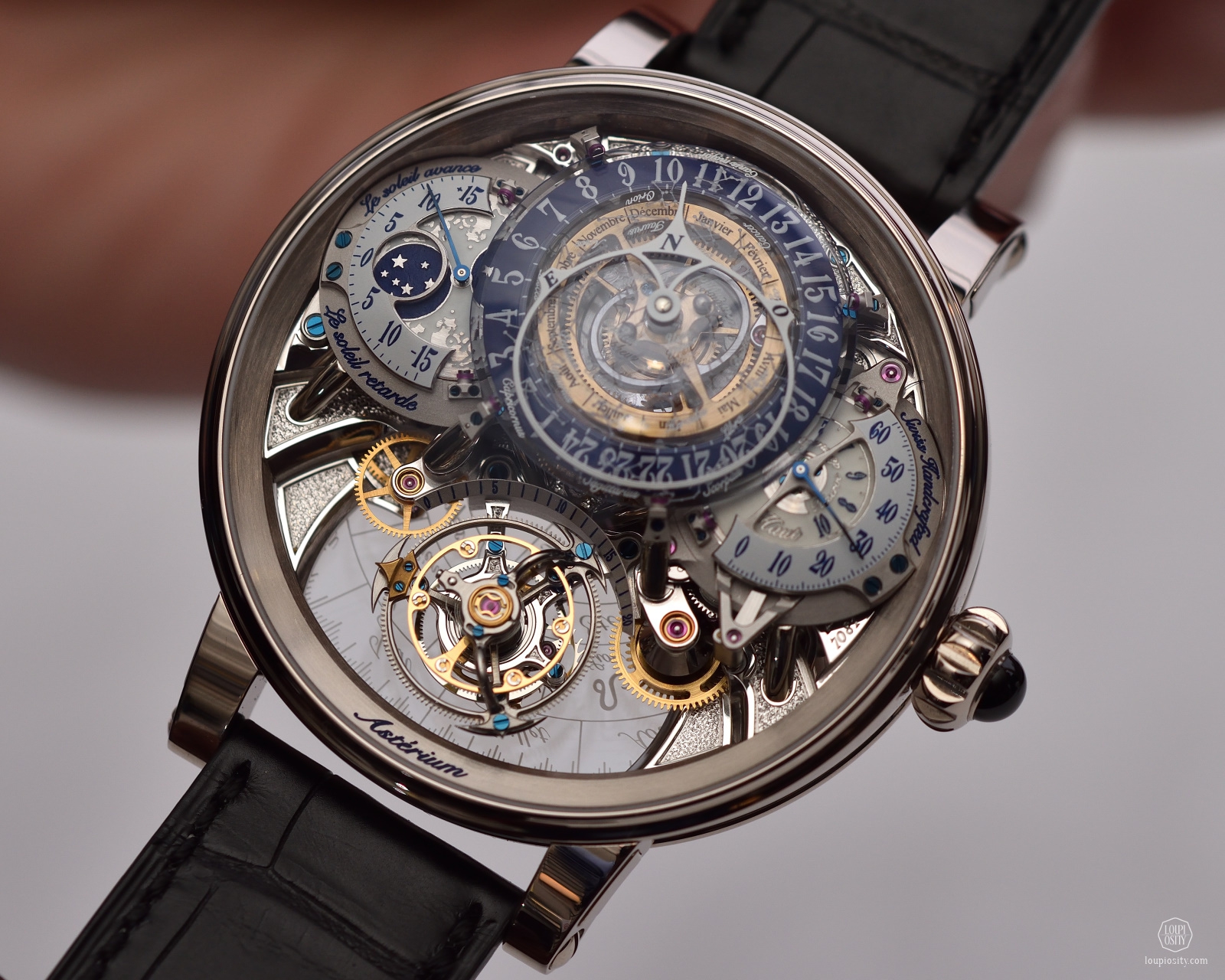 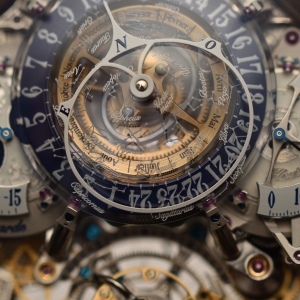 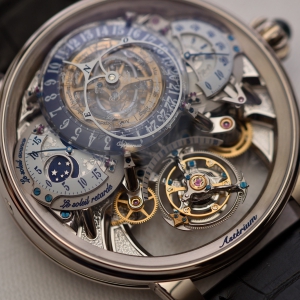 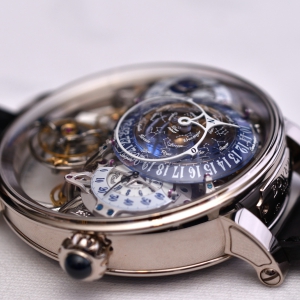 The lower-left sub-dial displays the actual moon phase. The scale and hand belongs to the equation of time complication, which points to how many minutes the Sun is late or fast currently, compared to our 24-hour average solar day. The gap depends on the Earth’s position in its orbital ellipse.

The rotation of the right sub-dial dome indicates the remaining power from the total 10 days energy reserve. The minute hand above moves on a retrograde 60 minutes scale.

By turning the timepiece the sun-adorned hand of the annual calendar becomes visible and shines over the blue-treated main plate. It makes one revolution every 365.25 days indicating the date and months on the outer skirts, while the zodiacs and the seasons are inside. The beautiful double-faced flying tourbillon and its 2.5 Hz balance wheel are responsible for the extraordinary chronometry. 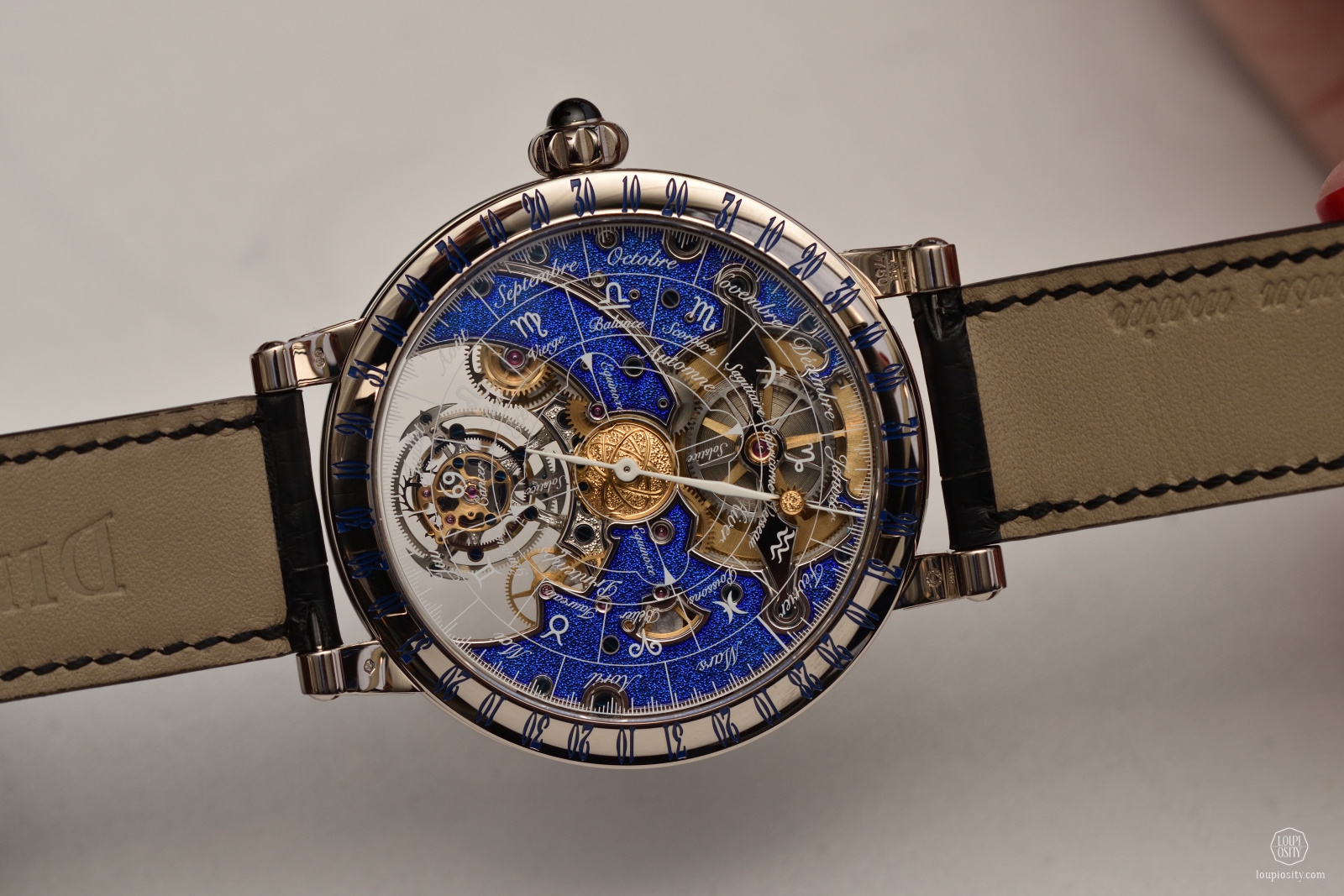 The new case family made its way into the Fleurier Grandes Complications collection by the Virtuoso VIII timepiece. The inclined shape allows a completely new movement structure compared to the multifunctional Amadeo cases. The excitement of exploring the possibilities that the fresh dainty figure offers was tangible when speaking with Bovet’s watchmaking artisans.

This time the main plate follows the typical full-plates of 19th century pocket watches. The bridges are hollowed out and adorned with the traditional Fleurisanne pattern. When observing it from the back, they stand tall above the rest of the base plate not only physically but also optically. The Fleurisanne motif gets great emphasis by the contrasting fine polish on the sides and the delicate chiselled base-plate finishing. The gold of the gear train and the barrel looks gorgeous; what’s more their efficiency is remarkable. One full winding is enough for 10 days’ running time in the same pace.

The dial, which balances the rich engraving adornment, is available in black lacquer (pictured), ivory and aventurine. Bovet opted for a large date window, but the actual mechanism occupies the smallest possible space.

Bovet’s novelties yet again walk the paths of virtuosity in a well-balanced manner. Strong visions are paired with technical and artistic realization capabilities, which result in creations that tell stories. 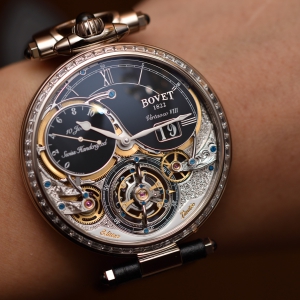 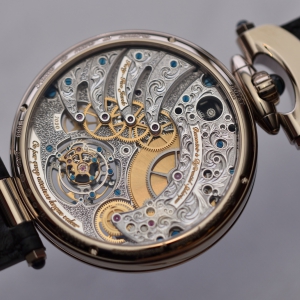 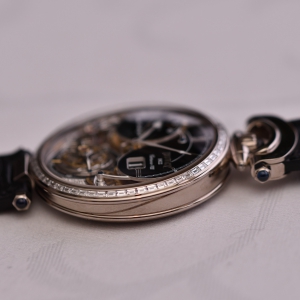 Bovet Fleurier Orbis Mundi Bovet celebrates the 200th anniversary of the company’s foundation by Eduard Bovet in 1822 this year. The Manufacture will hold boutique events throughout the year in various cities around the globe. At the opening of the event series, they presented Orbis Mundi, a true Bovet world-timer in the Villa Louis-Jeantet in Geneva.Bovet Récital 26 Brainstorm® Chapter Two At the Geneva Watch Days, BOVET 1822 introduced the Récital 26 Brainstorm® Chapter Two, a technically and artistically captivating timepiece encased in the inclined sapphire structure debuted last year on Chapter One.Bovet Battista Tourbillon at Dubai Watch Week 2021 At the Dubai Watch Week 2021 we had the chance to see the Bovet Battista Tourbillon, the next milestone of the brand’s collaboration with Pininfarina. The co-designed model is inspired by Pininfarina’s Battista GT Hyper Car.