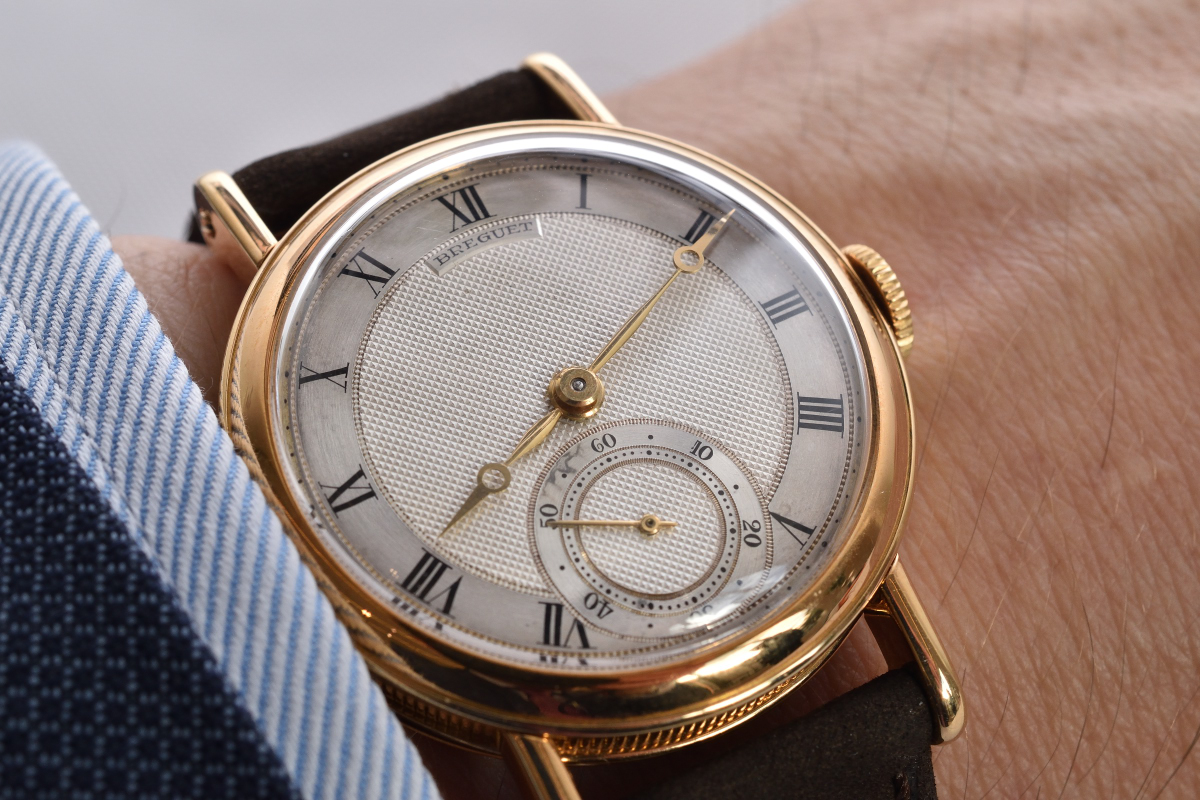 The huge 7-meter tall windows at the north-western corner of the Berkeley Square cry out that art resides within the walls of 30 Berkeley Square. As the autumn auction season is heating up, we went to preview the lots Phillips has gathered for the upcoming sales.

Geneva Watch Auction: Four will be held from 12-13 November. The 28th of November in Hong Kong will be about Rolex Milestones: 38 Legendary Watches That Shaped History, followed by The Hong Kong Watch Auction: Three on the 29th.

In the first chapter we browsed the chronograph Big Guns. This part focuses on pieces, which might receive less attention in the shadow of the highlights, yet they would deserve a separate stage in their own right.

The previous list was concluded with a Breguet chrono with a delightful, but complex dial – let Breguet start the next teaser with a piece that speaks a different language. These two are contemporaries, having only 7 years between them. During this period of the late 40s and 50s, Breguet (still being a French company back then) was rather involved in producing chronographs. Distinctive messengers of the era were the Type XX models (such as lot 119 and lot 122), which were made based on a French governmental specification for the French military. Breguet dress watches from this period are on the other hand super rare.

The Ref. B1772 offered for sale was made in 1955. Although its simple time function is surprising in the context of the aforementioned Type XX age, make no mistake, it represents the peak of watchmaking. The aesthetics and engineering solutions applied are truly Breguet: coin edge case, engine-turned hand guilloché dial, “pomme” hands, perfect proportions and a ruthlessly accurate calibre. Such dials on a silver or gold base have been made since 1786 by the manufacture. The Calibre 260 competition chronometer movement was made by Peseux between 1944 and 1967 specifically for observatory trial competitions. It was available as an ebauche and because of its’ high-end precision-driven build, various manufactures, such as Breguet, BeBa, Bucherer, Marvin, DuBois, Ulysse Nardin and L. Leroy & Cie incorporated it in their timepieces. Only circa 3300 movements were created, therefore it is an unusual catch on its own, especially in such a well-preserved and beautifully executed timepiece as this Breguet B1772. 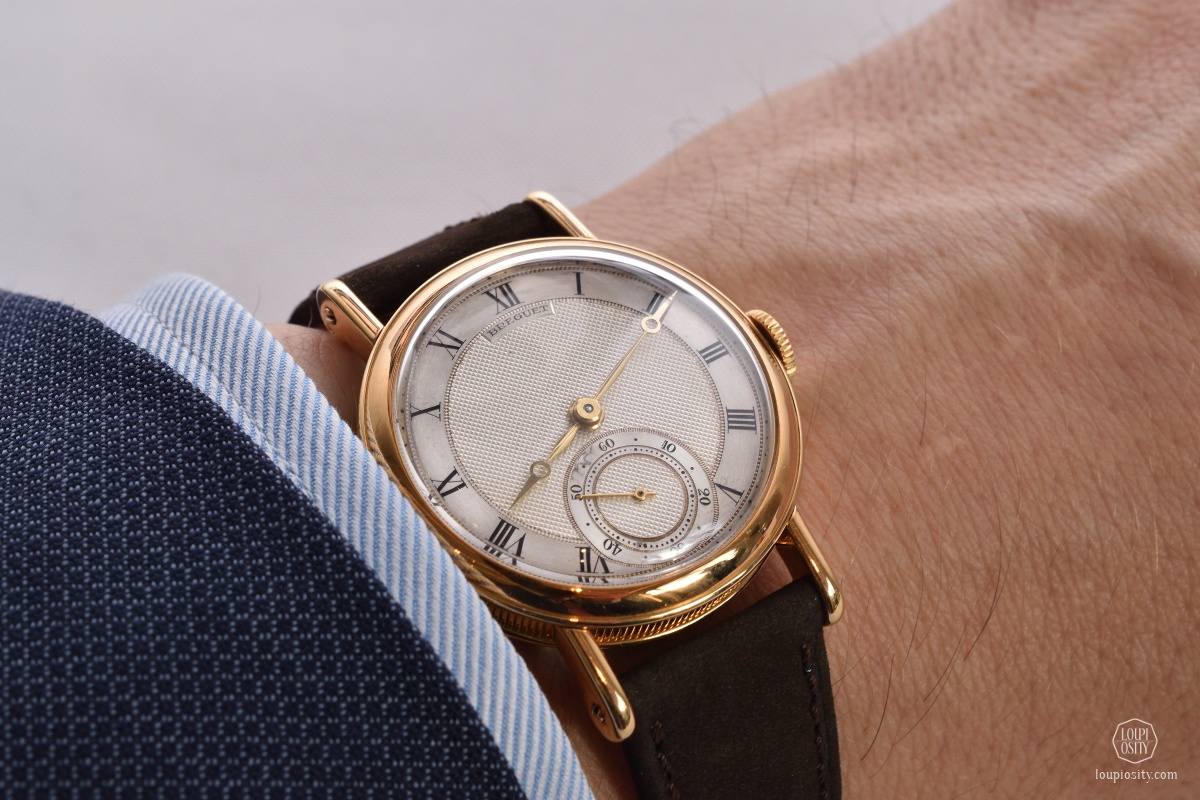 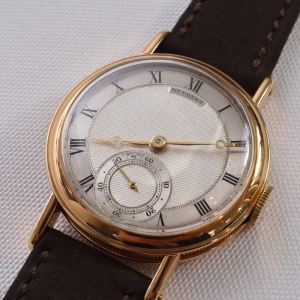 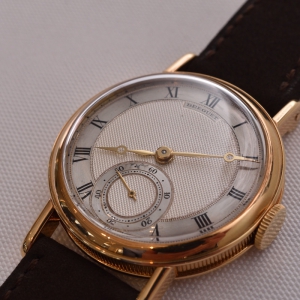 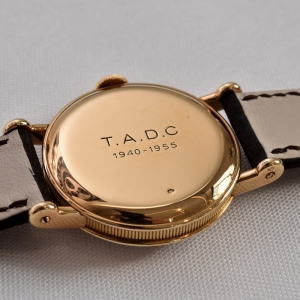 Jaeger-LeCoultre designed the Geophysic for the 1957-1958 International Scientific Year destined to bring high performance in environments where timepieces regularly fail to deliver accuracy. The age of the scientific cooperation coincides with the spread of electrical appliances in a broad scale. New high-current research environments opened, such as the CERN, where the balance spring and other parts of the watch movements responsible for precision were exposed to strong magnetic fields. Read our article about the Geophysic here.

Made in 1958 from stainless steel under the reference E168. To protect the piece from magnetism a soft iron cage encompasses the famous calibre P478BWSbr. A special beryllium, copper and iron alloy Glucydur was used for the balance, which reduced the impact of temperature changes on the spring’s dynamics.

Only approximately 1000 timepieces were created and the one auctioned is definitely in the elite circle of early Geophysics in flawless condition. It is offered for sale by the family of the original owner. 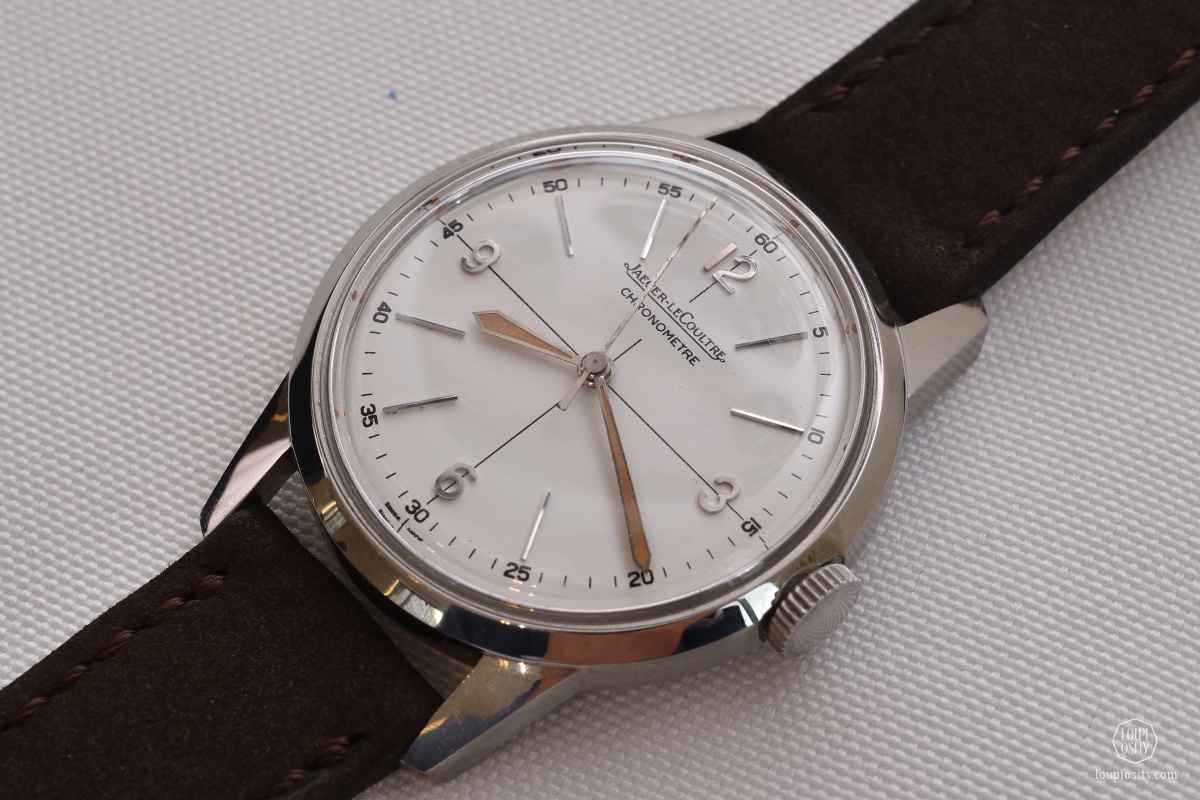 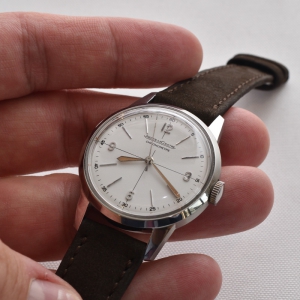 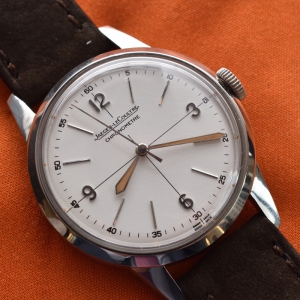 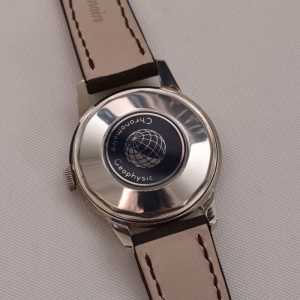 The late 50s and 60s were experimental years in horology. New materials and technical solutions were utilized (eg. the Geophysic above), and new design paths were explored. Industrial design of this age was rather bold and avant-garde, influenced by the fast-forward developments in areas like space, travel, science, entertainment or even advertising – please see the the text block at the end of the article.

A number of watch companies started collaborations with artists to create unusual cases (Gilbert Albert Swiss jeweller for Patek Philippe or the today also popular Manchettes watches by Piaget). Hard to believe, but in spite of how cool they are even today, they didn’t find a decent fan club back then and their production was soon ceased. This makes them not only genuinely mind-blowing, but rare, too.

The following two pieces are heralds of this movement.

Patek Philippe Ref. 3424 from the “Asymétrie” collection was designed by Gilbert Albert to Patek Philippe in the same year when the Geophysic emerged. He joined Patek Philippe in 1955 and made some of the House’s most daring shapes. Unlike the Ref. 3424 some of them never made it to production and remained prototypes. The white gold case is sleek and bends to the left in different angles on both sides, leaving the impression of opening towards the top. The indexes are variable length black “batons”. The crown that winds the manual cal. 8’’’85 is very reserved. With a figure like this, it’s no wonder why an American architectural photographer and magazine publisher bought it, called Walter G. Ashworth. It tells much about the ambivalent market reception (just as the mechanical uncertainty of the “quartz seventies”) that although the piece was finished by 1965, it was only finally sold in 1980. 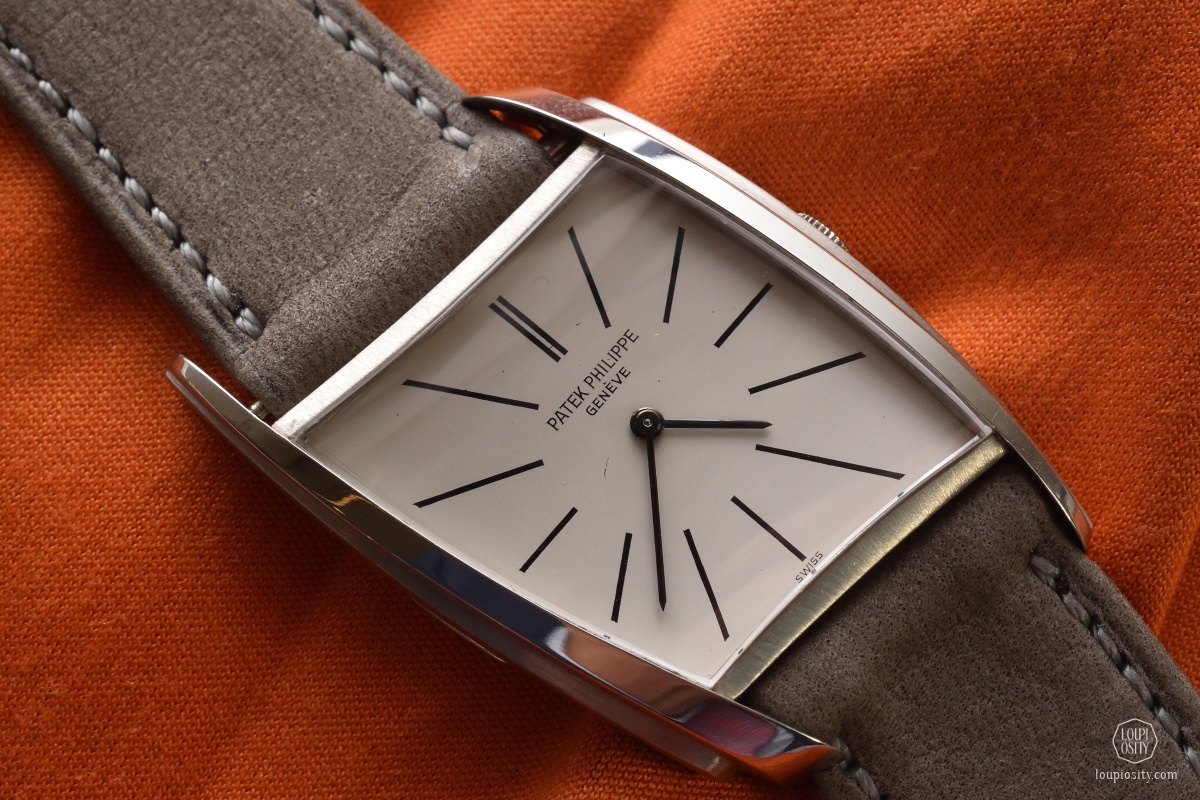 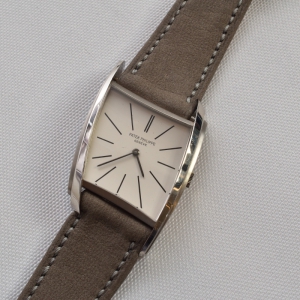 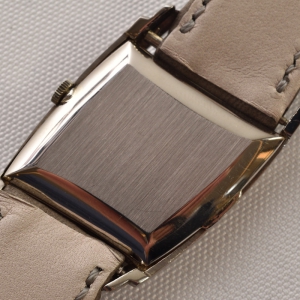 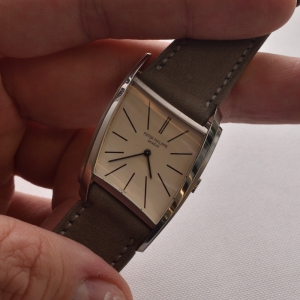 The next piece is labelled asymmetric, but its’ arch and inner trapezoid has a vertical symmetry axis, therefore I would only call it peculiar. It was made by Rolex together with a French goldsmith – a proof of which is visible on the back in the form of a “Made in France” engraving. The present piece is the member of a quartet each with a unique shape.

Although loving the lines of it, up until the moment it curled onto my wrist I thought that with my XY chromosomes I would not be the right candidate to wear it. I was wrong, I found it superb and would be eager to have it! The auction catalogue said that the arch (referred to as boomerang) recalls the Star Trek logo – Why not? They are contemporaries. And it praises the talent of the French goldsmith to elevate science fiction to the levels of sophisticated dress accessories.

The space ship is kept in motion by the Rolex’s calibre 1400 engine. 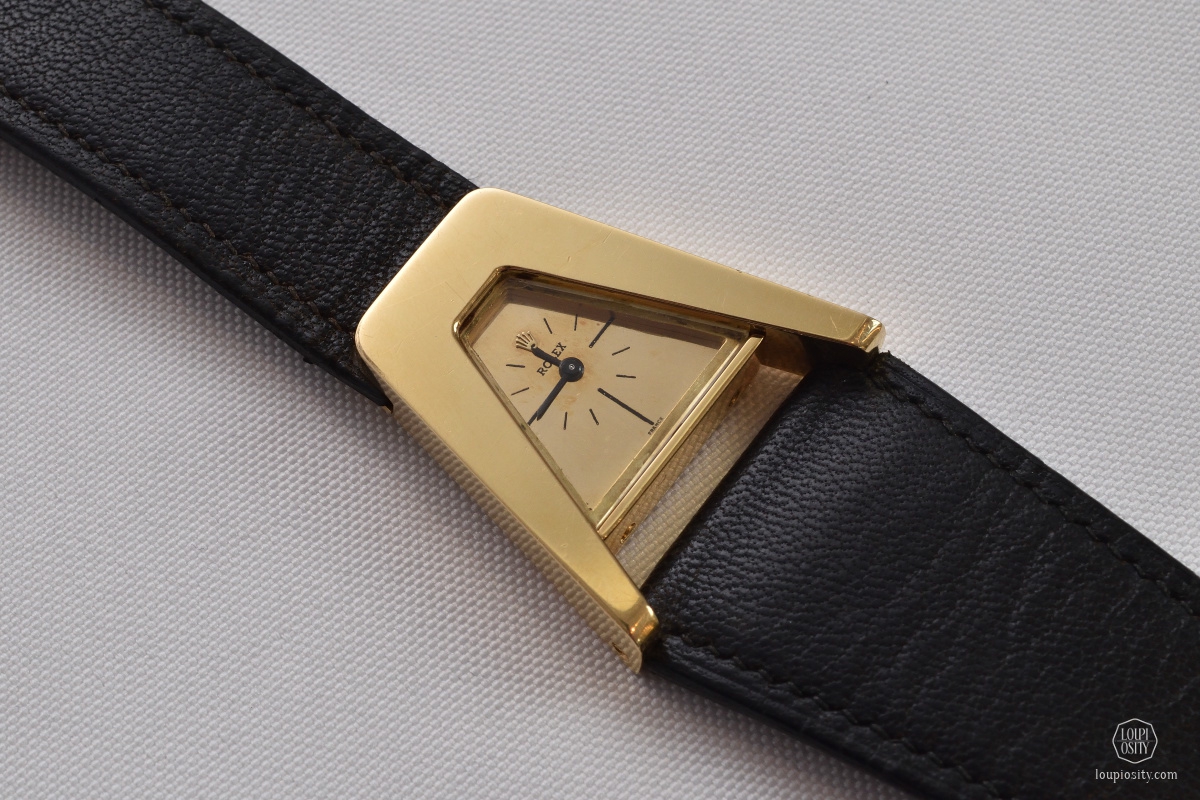 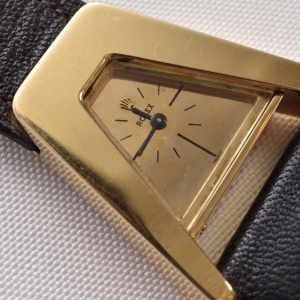 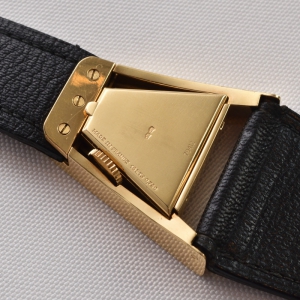 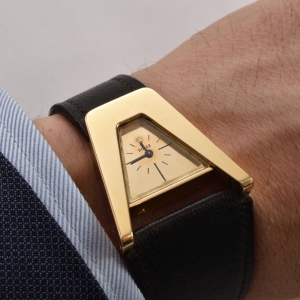 The successful Overseas collection of Vacheron Constantin started with this piece back in 1977. Jörg Hysek designed it and it was Vacheron Constantin’s response to the raise of quartz and outdoor watches. In ‘77 the company celebrated its 222nd anniversary, hence the name. The model came in steel, gold, and bi-colour versions and in two different sizes 34 and 38mm. Lot 20 is made of steel and is the larger of the two. Slim as a sports watch should be and with the bracelet that adapts nicely to the wrist the watch offers great comfort. The calibre is the automatic 1121, which stems from Jaeger-LeCoultre 920 roots.

The automatic JLC 920 movement was designed in the mid 1960s, it is very thin (2.45mm) with an overlying, full-sized winding rotor. The alterations of this calibre have been used in several popular watches by Audemars Piguet, Patek Philippe, and Vacheron Constantin. 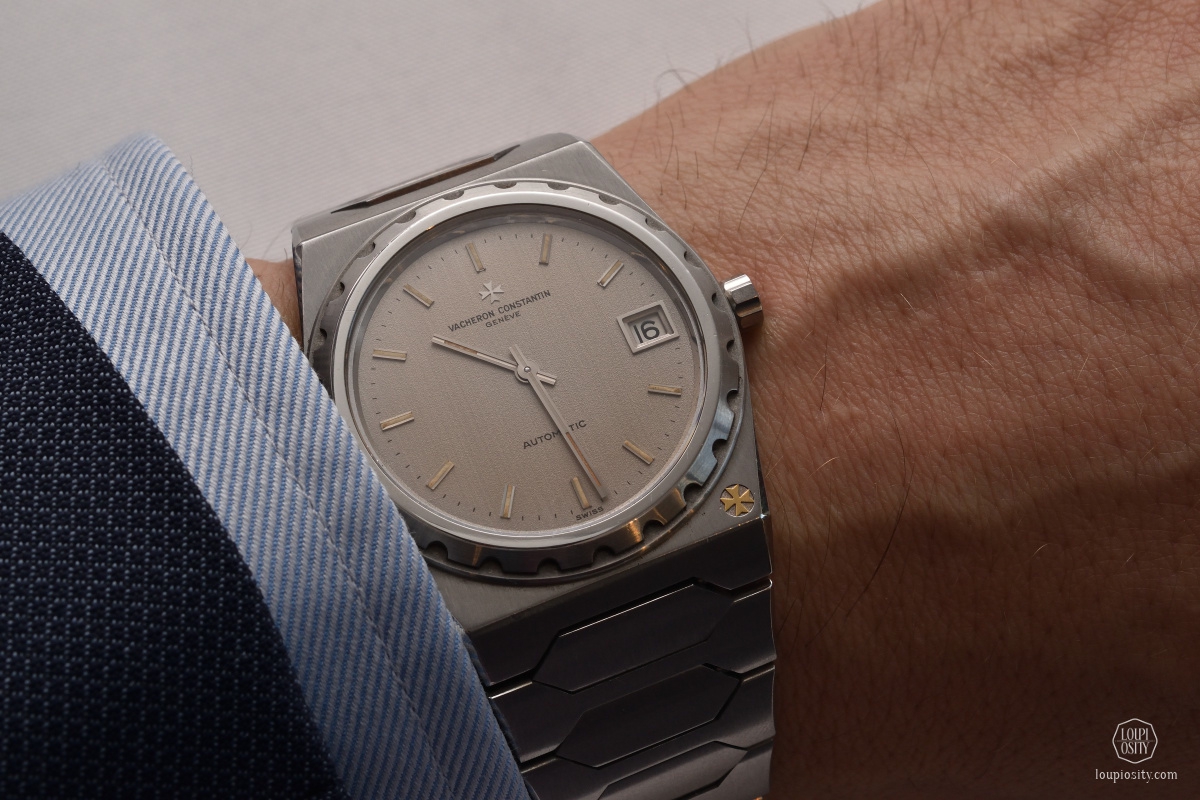 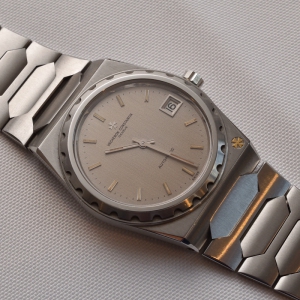 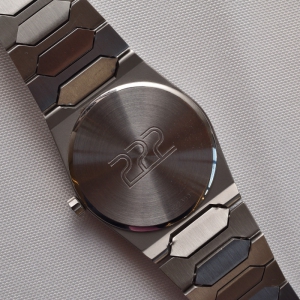 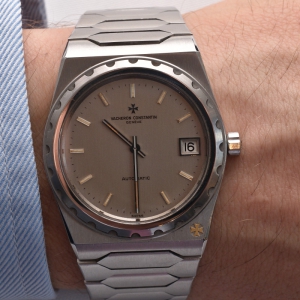 The art, the fashion or the design in the first decades following WW II is rather exciting. The economy recovered more or less quickly, but – especially in Europe – people had a desire for security and a regulated life. The results of many researches with new materials during the war, were now being used in everyday life. The nylon stockings, the synthetic polyester or polyamide objects found their place in the mass production rapidly, but also lent new ideas to the designers.

“Midcentury modern” broadly describes architecture, furniture, and graphic design from the middle of the 20th century, some art historian would say from 1947 to 1957. This era includes great pieces like the “Eames Shell Chair” from Charles and Ray Eames, the “The Butterfly Chair” from Arne Jacobsen, the “Barcelona Chair” by Mies van der Rohe and Lilly Reich or the “Pretzel” chairs designed by Norman Cherner, just to name a few.

Industrial design and the design of the “Atomic Age” bloomed: architecture, commercial design (including advertising), interior design and fine arts were all influenced by the themes of atomic and space science. Pop Art also emerged in the 50s as an art movement, emphasising the banal, everyday or sometimes overused elements of any culture, most often through the use of irony. (Outstanding artists were for example Andy Warhol, Richard Hamilton, Roy Lichtenstein. More: http://www.theartstory.org/movement-pop-art.htm)

The art and design of this era is more and more popular today. An impressive collection of 20th Century & Contemporary Art is going to be auctioned on 16 November at Phillips New York, including pieces from Tommy Hilfiger’s personal collection.
https://www.phillips.com/auctions/auction/NY010716

Only Watch 2019 at Christie's Following the preview of the one-off dedicated pieces of participating brands from 7-9 November, the 8th edition of the biannual Only Watch charity auction is about to begin at the Four Seasons’ Hôtel des Bergues in Geneva.Game Changers - Phillips Watches Phillips' Game Changers auction will be held in New York with iconic timepieces from equally iconic individuals. We previewed the two highlights of the sale in Geneva.Zenith x Phillips - The Zenith El Primero One-Off In… In 2019, Zenith celebrates the birth of its star, the El Primero movement. Lot 136 at the Geneva Watch Auction X is a special anniversary piece, co-designed with Phillips Watches in Association with Bacs and Russo with attributes never found on Zenith watches. The sale supports the NGO Zoé4life.