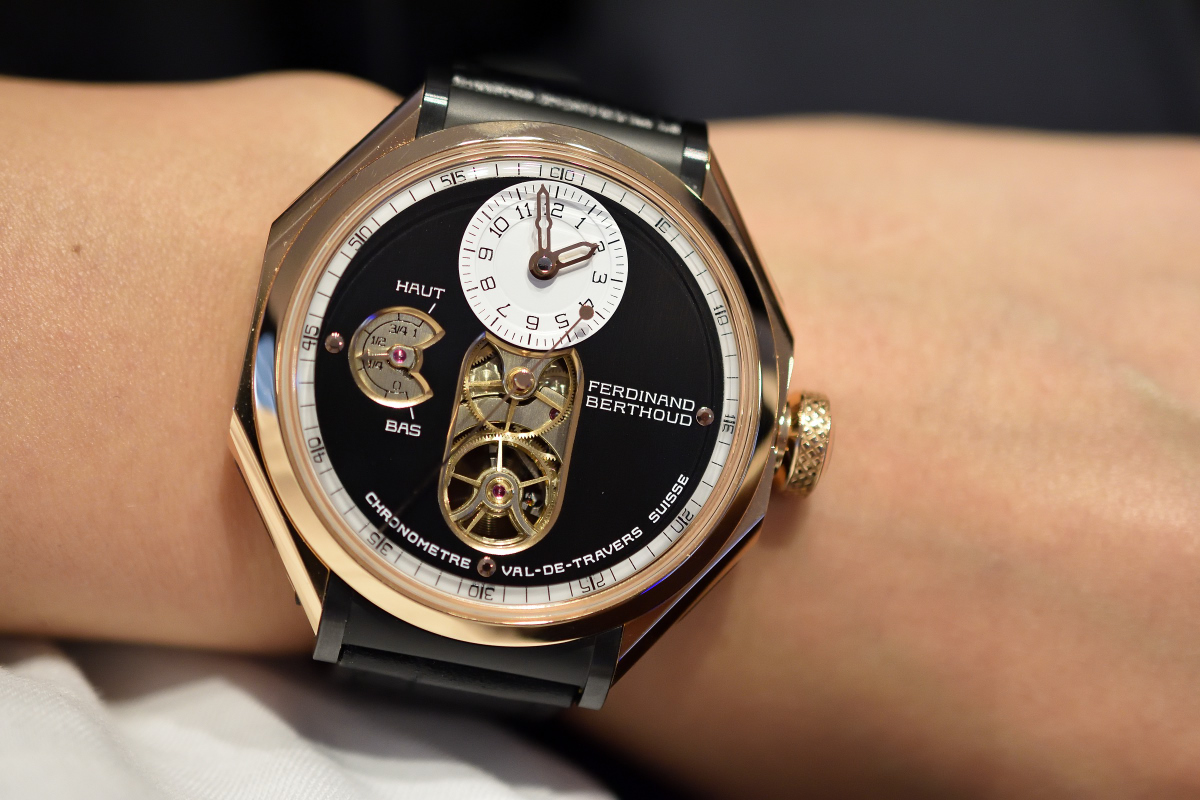 SalonQP is one of the last major fine watch events in the year. November brings a relaxed and carefree mood to the Saatchi Gallery before the chase for sales targets re-commences in January. I believe that it was a rather smart decision to choose its hassle-free milieu for staging the premier of the old-new boutique brand, Chronométrie Ferdinand Berthoud. Following the official announcements earlier that Fall in Paris, the curtain before the new love-child of Karl-Friedrich Scheufele opened to the wider audience at Salon QP.

I always have mixed feelings when hearing about the revival of historic names – famous names and history are used many time to establish undeserved credibility. In the case of Mr. Scheufele, who on one hand is accountable for building up the fame of Chopard as a stable fine-watch company, and is by all means not in the stressful position of needing to make a love-project monetary successful, I could imagine different motivations. My growing curiosity led me to Audrey at the Salon QP, who confirmed this image completely – please read our article about FB1 and the history of Ferdinand Berthoud here.

The FB1 is a fresh timepiece which greets the ancestors but walks its own path. Its shape is far from usual and provides a stylish skin for the fine content within. The mechanism was deliberately made interesting by applying contemporary and ancient solutions. The unit is so well-made, complete and exciting that it will repel the mainstream crowd but will attract charismatic un-conformists like a magnet.

They, who have also been usual guests at Les Ambassadeurs, can now lay eyes on the unusual octagon case of the FB1 sunbathing in the Buben & Zörweg safes from now on. Pieces of the cca. 150 watches annually produced will be sold in Switzerland exclusively by Les Ambassadeurs (Dubail is their partner in Paris and William & Son in London). 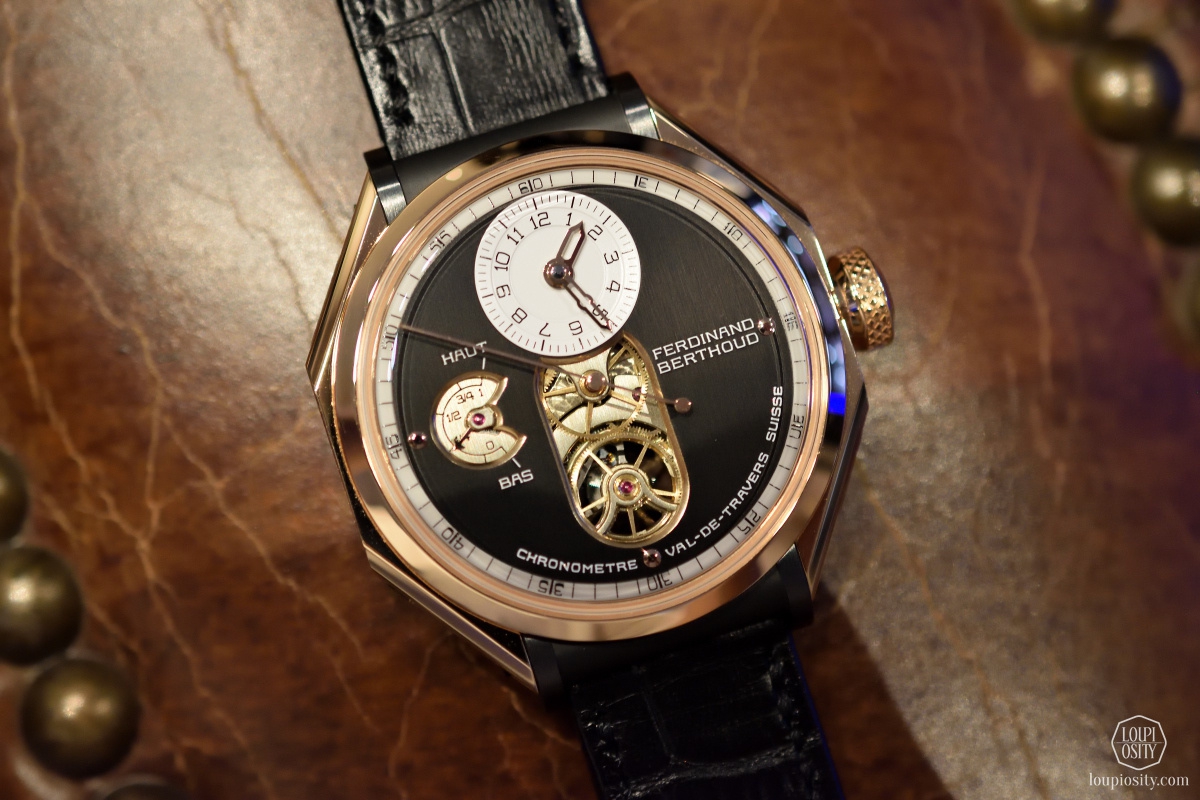 Last week Mr. Karl-Friedrich Scheufele (co-president of Chopard and President of Chronométrie Ferdinand Berthoud) and Mr. Joachim Ziegler (CEO of Les Ambassadeurs) announced their partnership in the Zurich boutique, where I had the chance to speak with both of the gentlemen.

Many of the projects Mr. Karl Friedrich Scheufele is associated with, such as the “Le Caveau de Bacchus” vineyard, the beautiful classic cars and the Mille Miglia or Ferdinand Berthoud, seem to be rooted in a human heart instead of a checked notebook. Of course at one point these all have to make a business sense, but they all seem to contribute to his self-realization and serve more as sources of joy than pure income.

“Ferdinand Berthoud was my secret project”, he explains. “Our museum in Fleurier, the L.U.CEUM, has a dedicated thematic space for chronometers and I started to study the history of marine clocks. Beyond the works of Ferdinand Berthoud, I found his story particularly fascinating, including the fact that Berthoud was born in 1727 in Val-de-Travers – a few minutes away from Fleurier, home of the Chopard manufacture.” 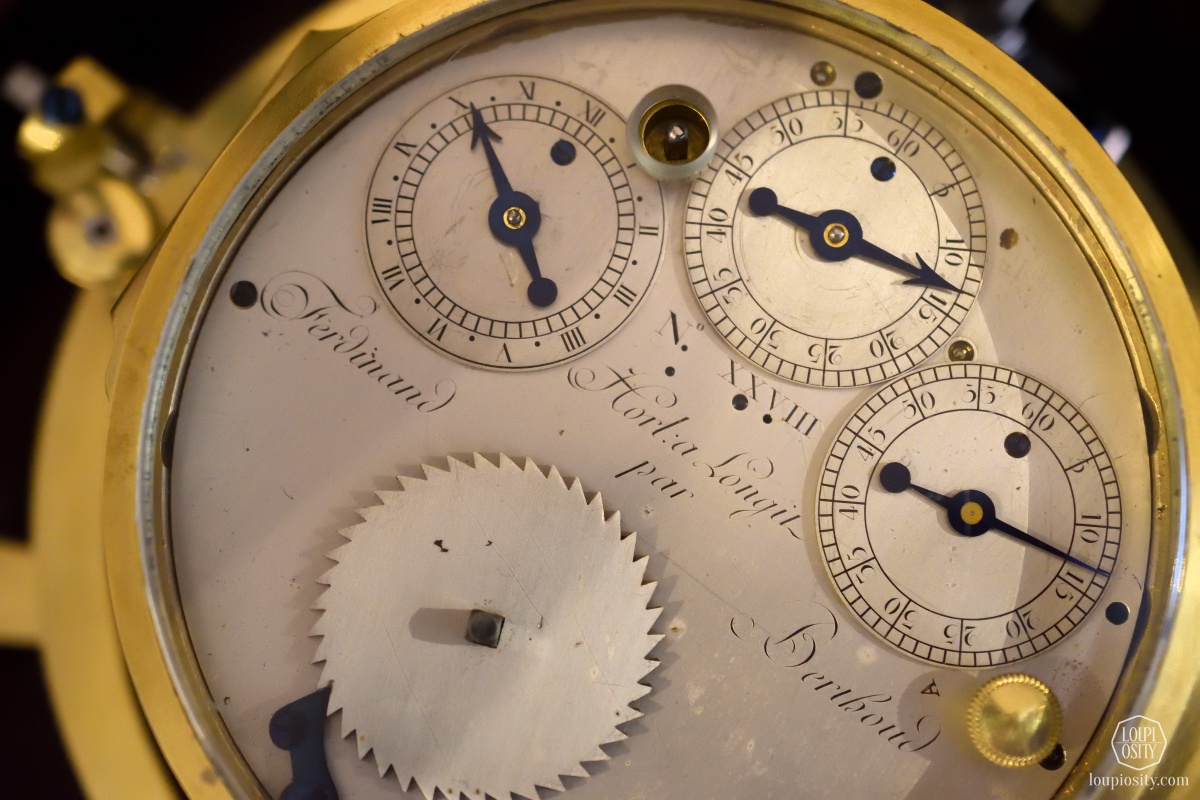 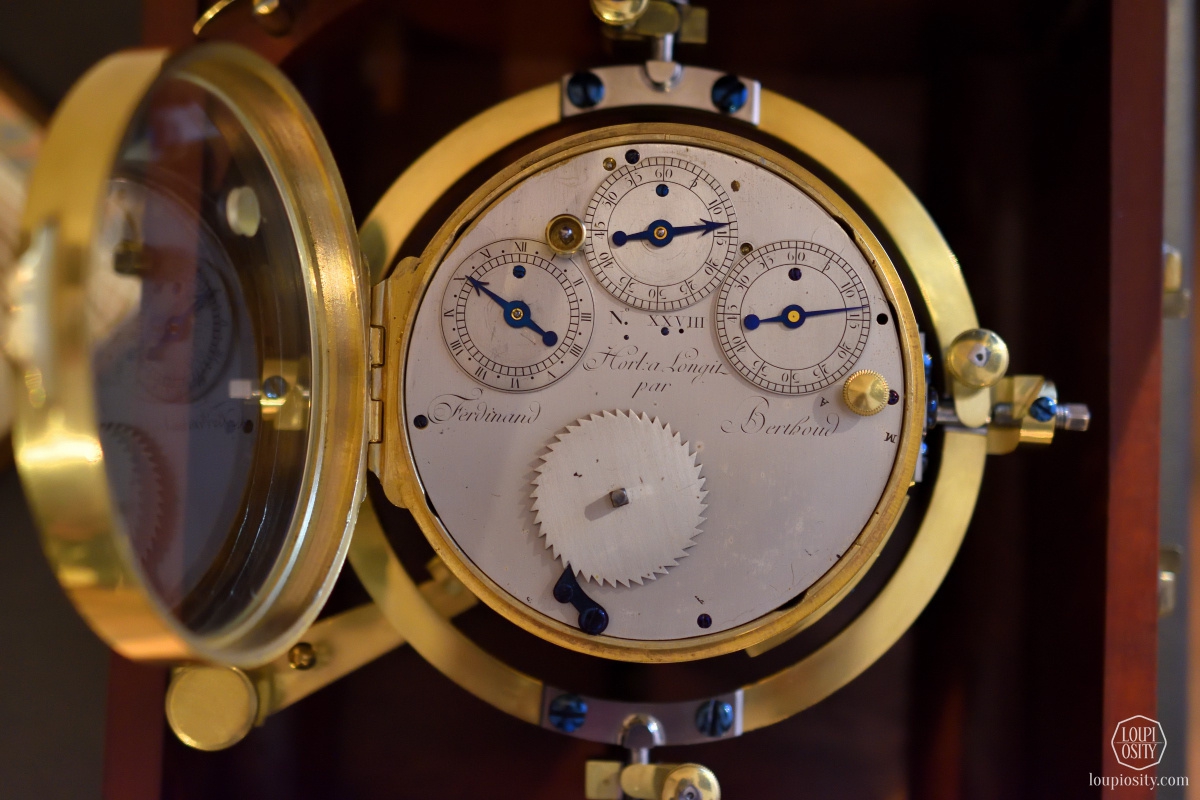 Mr. Scheufele expanded his collections with Berthoud’s marvels, such as the marine chronometer above. He later discovered someone who already registered the name “Berthoud” but had a rather vague idea about what to do with it. Following years of preparations, he finally bought it in 2006.
“At that time I was not sure myself what I would do with the brand, but I knew that I did not want to see a Ferdinand Berthoud piece with a mass-produced movement encased in an ordinary house.”

Planning started and a small project commenced in great secrecy involving a handful of watchmakers from Chopard, who worked at Chopard during the day and dreamt the new Ferdinand Berthoud model after hours. The progress was promising, yet it took years until at the end of 2013 Chronométrie Ferdinand Berthoud was officially announced.

The creative process in such a project is rather special and although Mr. Scheufele is not a watchmaker himself, he has enjoyed taking part in it. “I have spent a considerable amount of time in watchmaking and I have a strong idea about the concept of this special piece just as the people we are making it for. I can add new viewpoints and different angles to the development.” 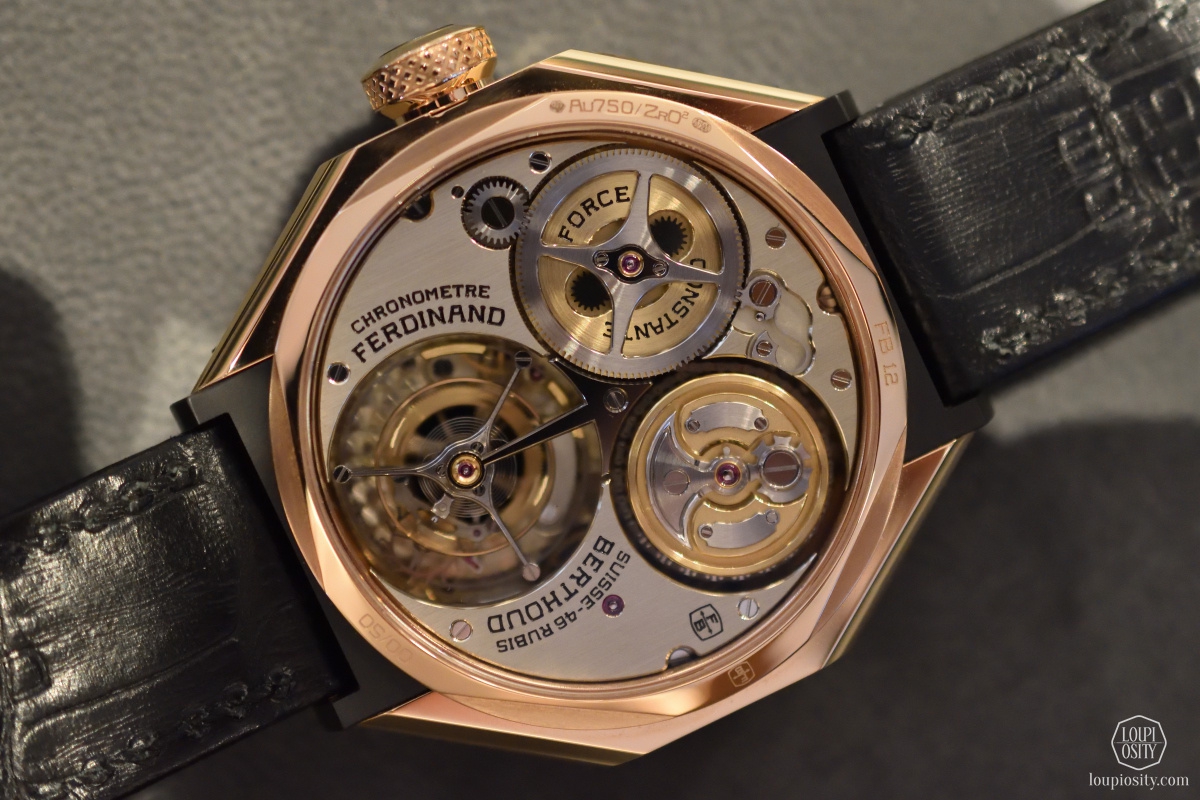 The giant question mark of economy casts shadows over many niche brands, especially if the industry and the market are not performing exceptionally well. People’s excitement often collides with rude reality that results in unwanted derailment.
However, this new manufacture has an advantage not to be missed: while it is an independent company, it does have an established business with skills, facilities and resources in the background. Mr. Scheufele emphasized that the design and production of Ferdinand Berthoud watches happen in a separate, autonomous and dedicated process, yet it can build on the assets of both the Chopard Manufacture and the Fleurier Ébauches.

The production is kept as exclusive just as the piece itself. Skills required to sell them are far from average too, which is why he was delighted to receive Mr. Joachim Ziegler’s email one day. The CEO of Les Ambassadeurs saw a picture of the movement of the timepiece and approached Mr. Scheufele with enthusiasm. The partnership is important for both companies and this was evident at the event, when both of the gentlemen talked about the collaboration ahead with great devotion.

The new Ferdinand Berthoud timepieces found a worthy place in the “Wall of Fame” of the Les Ambassadeurs – more specifically a wall safe filled with exceptional timepieces. Beyond the prominent surroundings it is also important that such a highly technical and limited timepiece requires sales experts with an in-depth knowledge as well as good connections to refined collectors – both of which the over 50 years old boutique is famous for.

Luxury is an overused expression with many definitions and interpretations. To start a niche brand and dedicate people, resources and time to such a project without the paralyzing pressure of constraints on your shoulders is a real luxury. Something only a few can afford nowadays, not just financially but mentally, too.

Get your appointment to the boutiques in Zurich, Lucerne, Geneva, St. Moritz or Lugano and see if FB1 moves you. 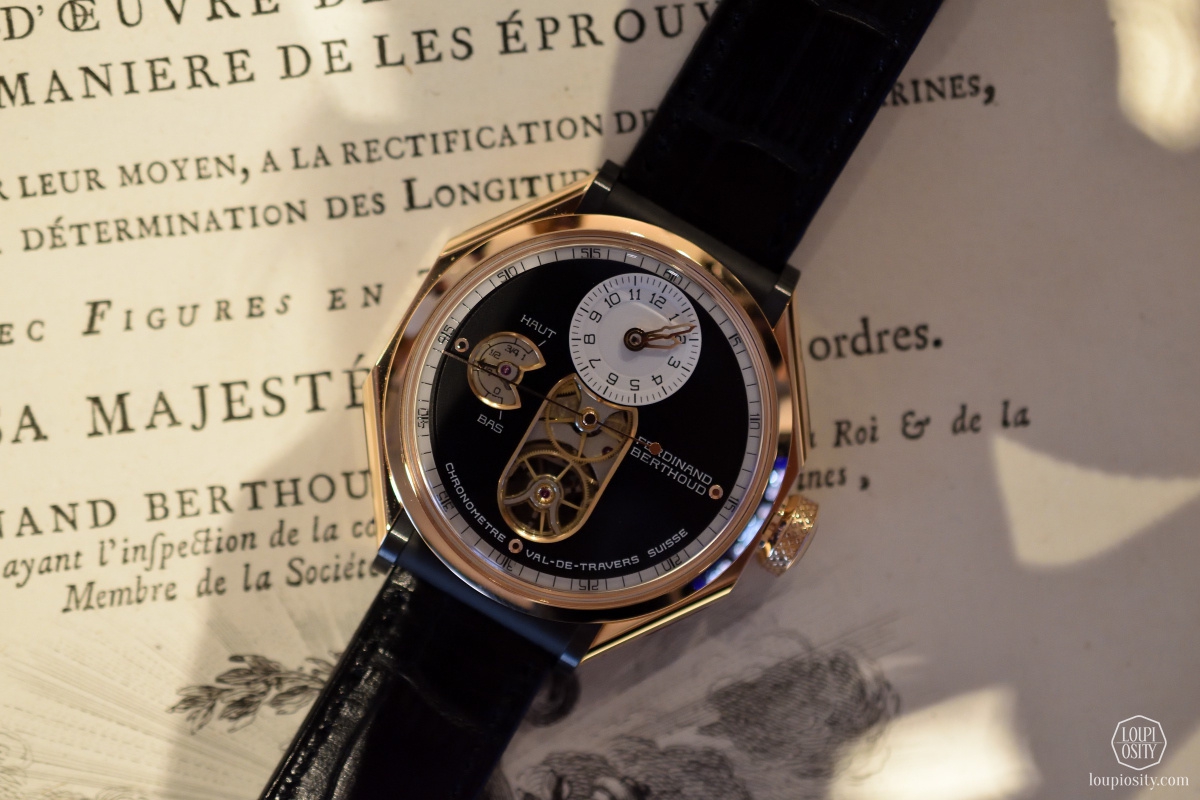 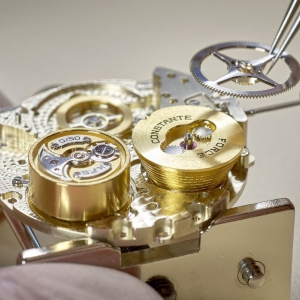 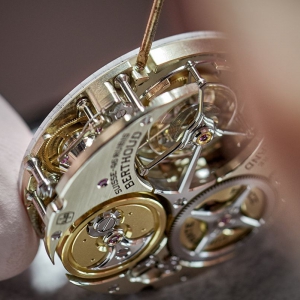 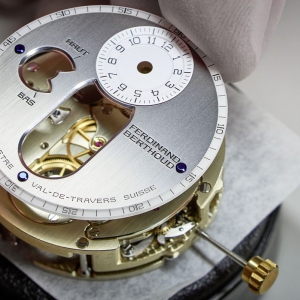 'Oeuvre d’Or' by Ferdinand Berthoud To the SIHH, Chronométrie Ferdinand Berthoud brought 'Oeuvre d’Or' limited editions of the FB 1 with patinated gold dial. Look at this beauty!URWERK - Geneva Watch Days For the Geneva Watch Days, URWERK set up in a beautiful suite with a lakeside view at the Beau-Rivage to introduce their latest novelties. We saw the unique UR-T8 Raptor piece and the EMC Time Hunter Desert Sage.Time Æon Foundation Time Æon is an initiative aiming to save the soon extinct traditional watchmaking know-how that once shaped timepieces. At the SIHH 2019 we spoke with David Bernard, director of the Time Æon Foundation about their past and future projects.