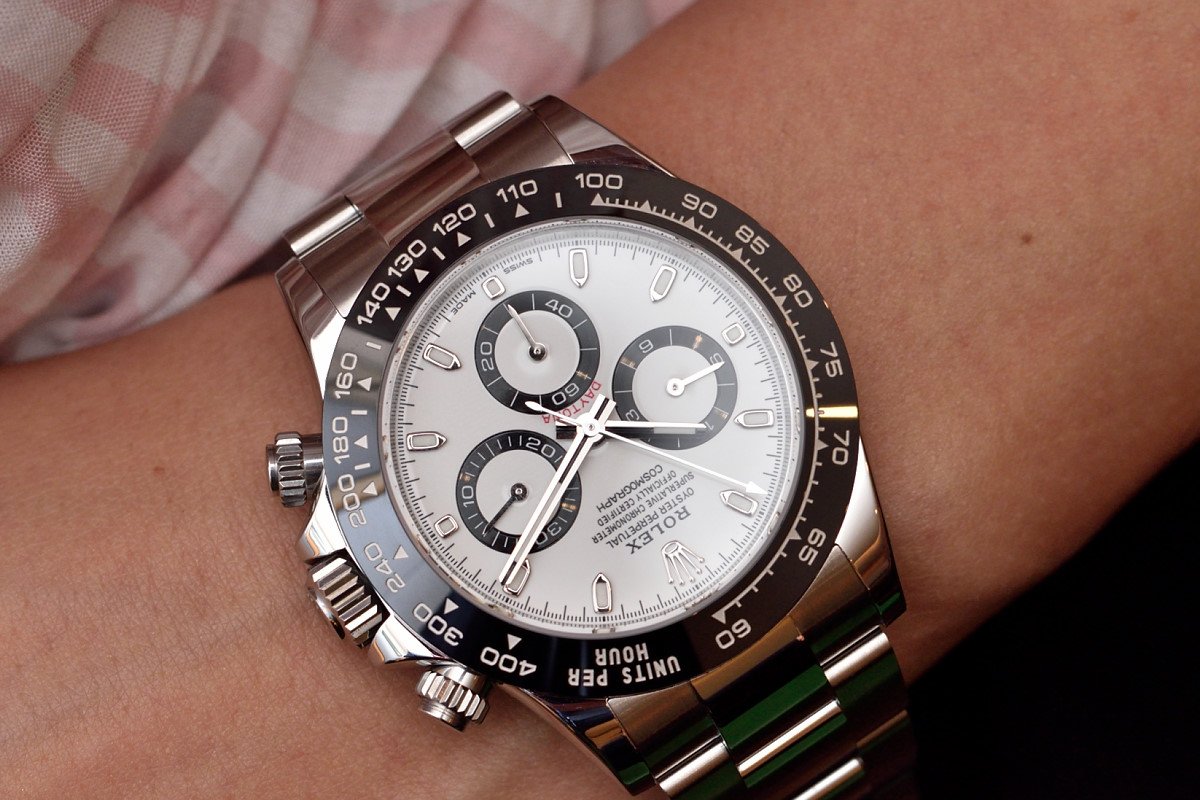 On 22 March 135 years ago Hans Wilsdorf was born. The marketing genius built up Rolex, the textbook example of brand building paired with top watchmaking expertise. Two legendary Rolex lines celebrated round anniversaries too: 2016 is the 90th anniversary of the Rolex Oyster wristwatch and 60th of the “President” Day-Date.

Mr. Wilsdorf was born in Kulmbach, Bavaria (Oberfranken – Germany). After the death of his parents his uncle sent him to a boarding school. He started to work for pearl and watch export companies before in 1905 he founded Wilsdorf & Davis, his own distribution company with his brother-in-law Alfred Davis, in London.

In 1908 he registered the “Rolex” name as a trademark. As the story goes he tried to combine the letters of the alphabet in many ways and finally a “genie helped” him to find the right one. Or maybe it was his own marketing genie since other sources suggest that the brand name was derived from hoROLogie EXcellence. Either way, he opened an office in La Chaux-de-Fonds and he started to work together with Hermann Aegler’s firm in Bienne, who was specialized in small lever escapement movements to produce timepieces.

He registered other brands too. Many disappeared, but one operating to this day is Tudor. As you can see from a great example here, Wilsdorf even had timepieces under his own name.

In 1914 WWI broke out, the soldiers needed good wristwatches and Wilsdorf was ready to deliver. However, due to the increased British import duty even on products that were destined elsewhere, he transferred the worldwide export activities to Bienne.

In 1920, Montres Rolex S.A. was registered in Geneva, and six years later the new company released the first water- and dustproof wristwatch case: the Oyster. Hans Wilsdorf found the right face to advertise the qualities of the new Oyster in Mercedes Gleitze. She was a British professional swimmer with a number of records including endurance swims. Her dream was to swim across the English Channel. She made her first attempt in 1922, failed seven times but finally became the first English woman to conquer the Channel, on her eighth attempt, in 1927. However, the Channel Swimming Association had questioned its validity, so she had to fulfil a “vindication swim”. This time the conditions were so rough that after ten hours and twenty-four minutes, she abandoned. Nonetheless, after witnessing her courage, people no longer doubted the legitimacy of her previous performance either.

Mr. Wilsdorf saw opportunity in the attempt and got her to wear a small gold Rolex Oyster around her neck on a ribbon throughout the feat. Rolex published a full-page ad on the front page of the Daily Mail: “The wonder watch that defies the elements”. By the way, this was the first front page ad ever bought – again a proof of Hans Wilsdorf’s marketing foresight. 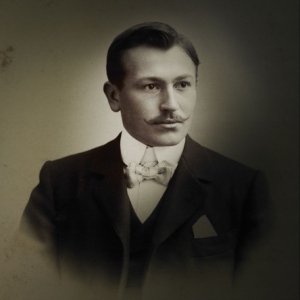 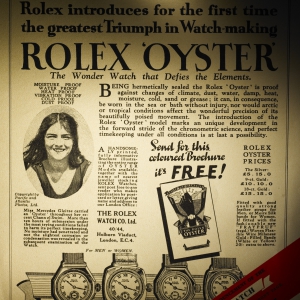 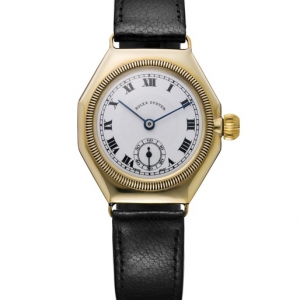 The Air-King is a divisive watch among Rolex fans. Some appreciate it for its simplicity and to-the-point design and function while others think it is too low-key to be a true Rolex timepiece. The story of the model dates back to the 1930s. The pilots of the British Royal Air Force (British RAF – later they played a large role in WWII) used Rolex Oyster Perpetual watches on their missions.
As Charles Douglas Barnard (British aviator, who served in WWI and had record-breaking flights) declared: “The peculiar qualities of this Rolex watch render it eminently suitable for flying purposes and I propose to use it on all my long-distance flights in the future”.

Hans Wilsdorf quickly reacted and decided to launch a line for the royalty of the air. There were a few preceding versions but the first actual Air King was born in 1945. The line remained popular, the Air King 5500 was the most coveted model.

A new Oyster Perpetual Air-King was introduced at Baselworld 2016. It has a 40 mm waterproof case in 904L steel, which provides optimum protection for the Air-King’s high-precision movement and is also fitted with a shield to combat magnetic fields. It features a distinctive black dial with a combination of large 3, 6 and 9 numerals and it uses the same letters for the “Air-King” name as the earlier models in the 50s. The only coloured parts are the “Rolex” label on the dial and the seconds hand. The Chromalight details emit a blue glow with a long-lasting luminescence. 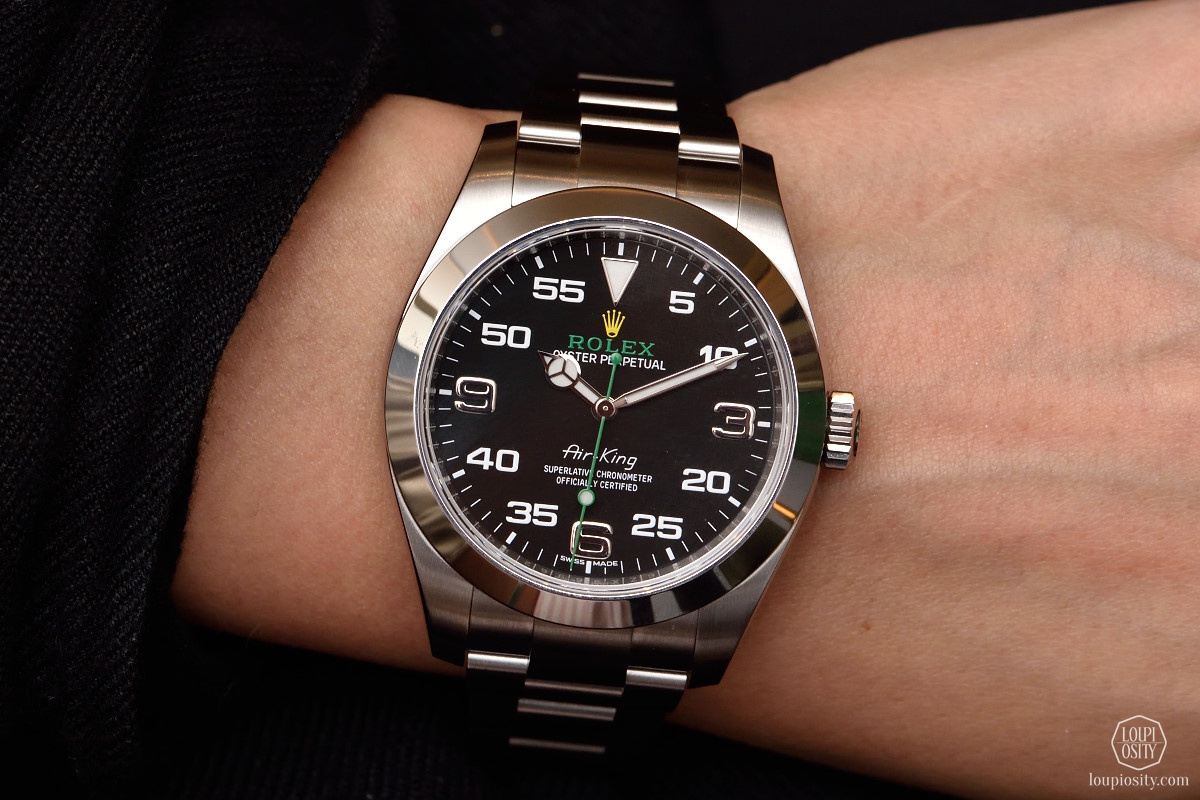 The Day-Date is the most prestigious Rolex model since 1956. It started as the first calendar wristwatch to show the day written in full, in addition to the date. The models are available exclusively in 950 platinum or 18k gold, that are created in Rolex’s own foundry. We discussed it in detail here.

As you might guess, Rolex has chosen a special colour for the 60th anniversary models: a bright new dial in green, Rolex’s hallmark colour with white gold or Everose gold case. 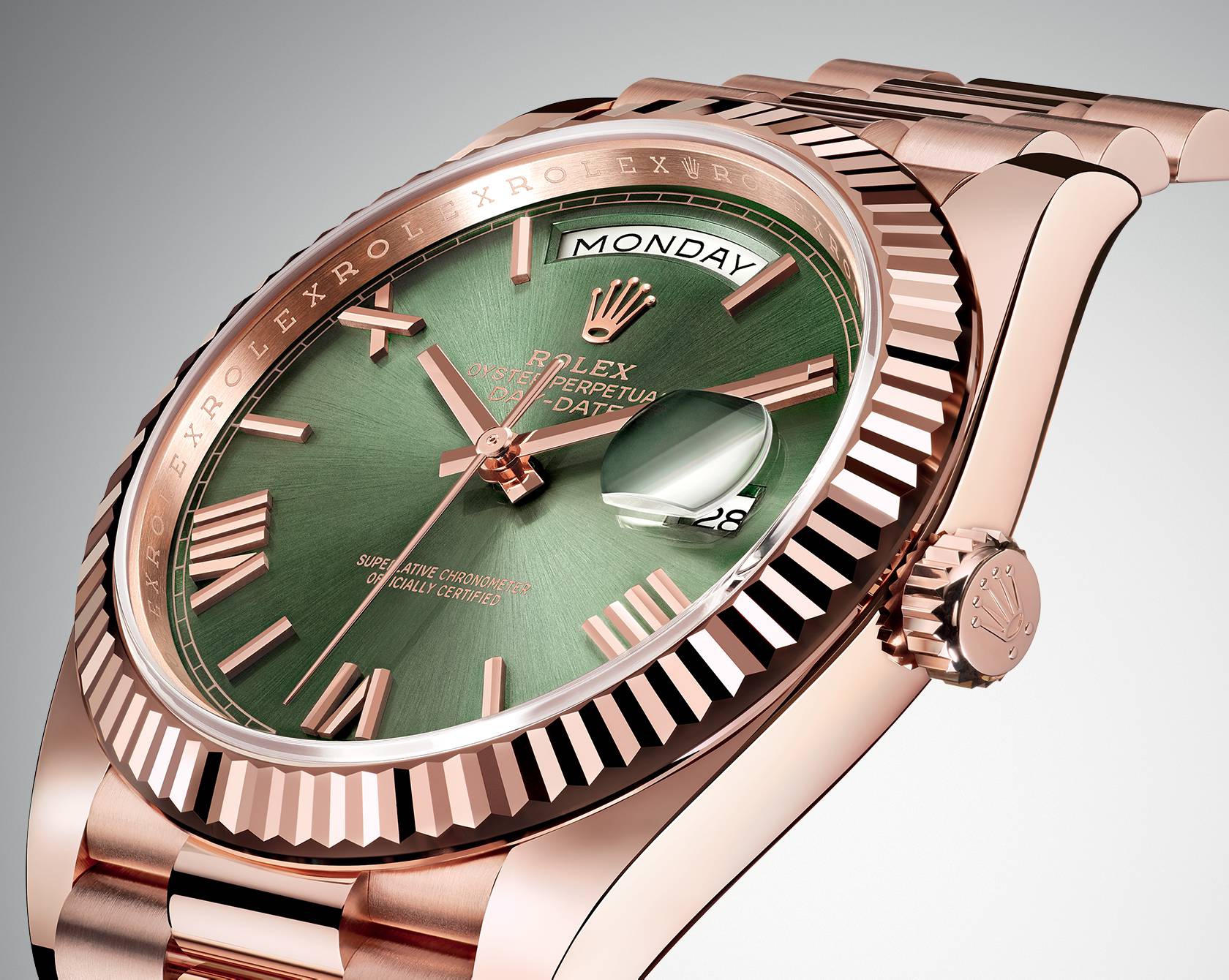 Before Baselworld a few sources predicted that the good old Daytona, the holy grail of many Rolex collectors, would receive new versions this year. (We dedicated an article to the Daytona International Speedway and to the watch here.)

The first “real” Daytona appeared in 1963. Since 2000, the series has been produced with the calibre 4130 in-house automatic certified Swiss chronograph movement that is famous for its reliability and precision.

For a long time the Daytona was only available in Everose gold, yellow gold, white gold and platinum. In 2016 the Oyster Perpetual Cosmograph Daytona was released in 904L steel with a monobloc Cerachrom bezel, with white or black dials.

Cerachrom – developed and patented by Rolex – is a ceramic component that yields quite a resistant and nice surface (with long-lasting colour and lustre), which was first used in 2005 in black. The monobloc Cerachrom bezel is made in a single piece and holds the crystal firmly in place on the middle case, ensuring waterproofness. 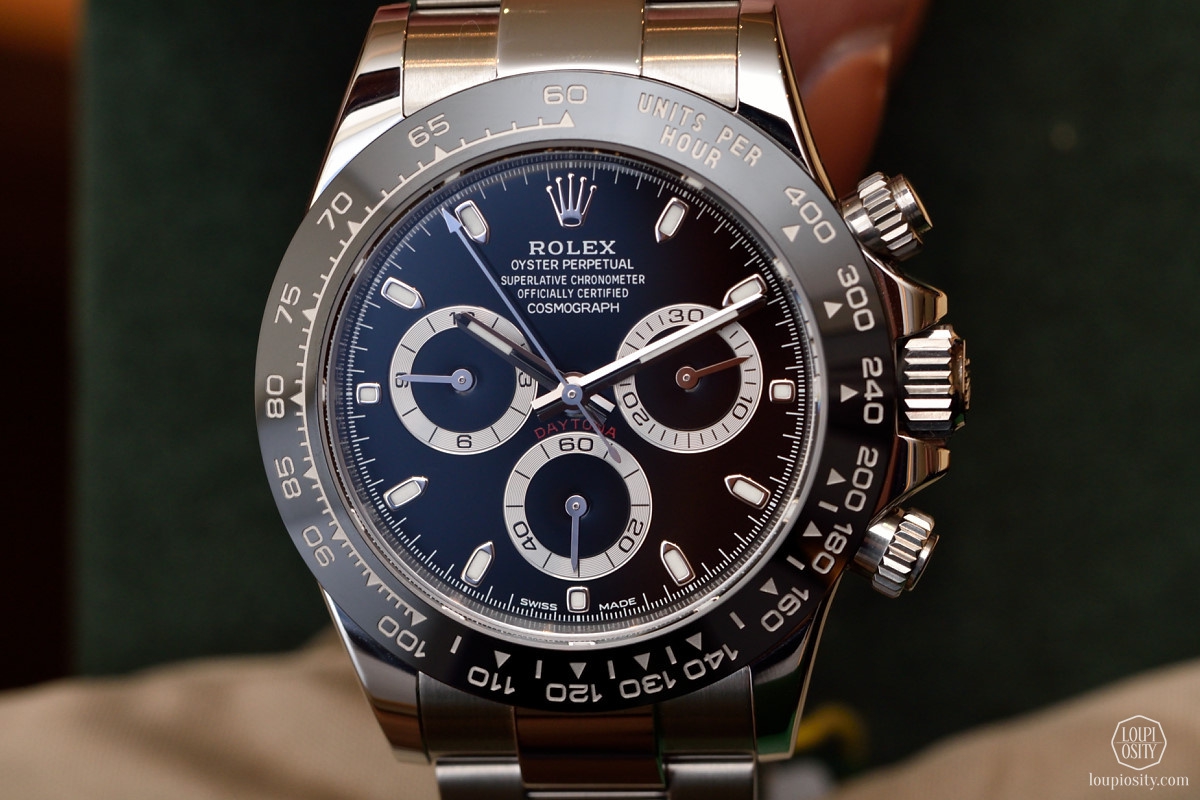 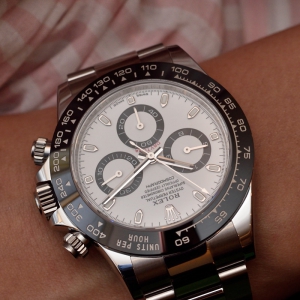 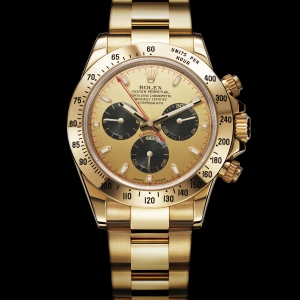 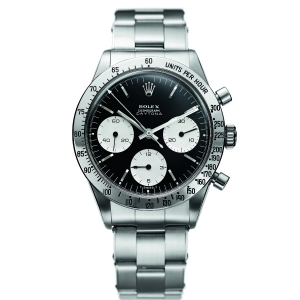 A stylish way to celebrate the anniversaries was to announce the little green seal’s appearance on all Rolex watches from this year onwards. The seal attests the presence of a “Superlative Chronometer”.

Officially certified COSC chronometer: the COSC (Contrôle Officiel Suisse des Chronomètres – the Official Swiss Chronometer Testing Institute) is a non-profit organisation created by five watchmaking cantons (Bern, Geneva, Neuchâtel, Solothurn and Vaud) in the early 70s. According to their definition, a chronometer is a high-precision watch capable of displaying the seconds and housing a movement that has been tested over several days, in different positions and at different temperatures. Among other criteria the precision of a certified watch has to be −4/+6 seconds per day. Only about 3% of Swiss watch production is COSC certified.

In Rolex’ terms the Superlative means that “the precision of a Rolex Superlative Chronometer after casing is of the order of -2/+2 seconds per day”. The company has its own laboratory and very well defined methodology for their own Superlative standards.

The certification comes with an international five-year guarantee. Rolex announced new guarantee regulations in 2015. The so far two-year warranty was extended to five years for every new purchase from an authorized dealer starting from 1 July 2015. Remarkably, one year warranty extension was offered to all Oyster and Cellini pieces sold in the previous two years on top of their original two years of warranty. 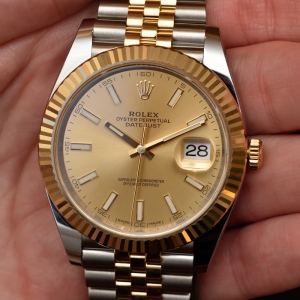 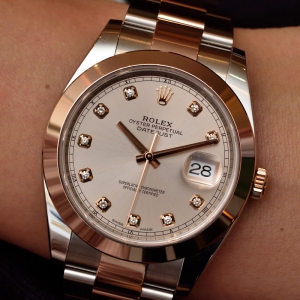 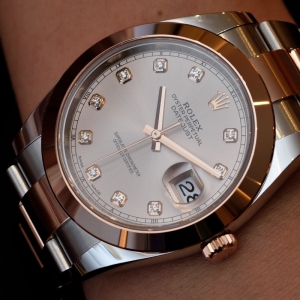 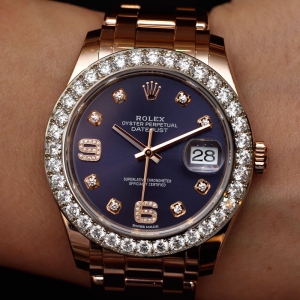 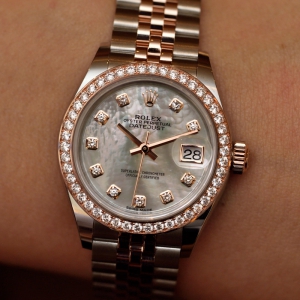 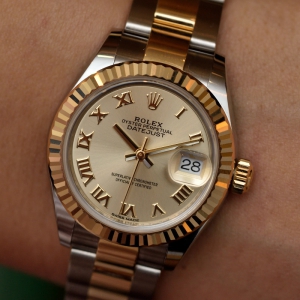 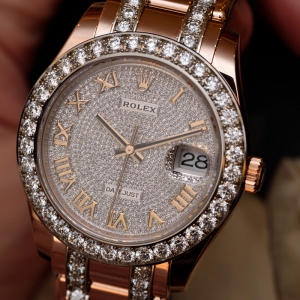 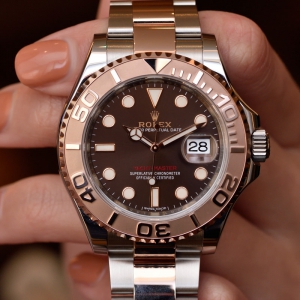 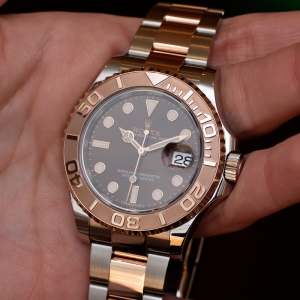 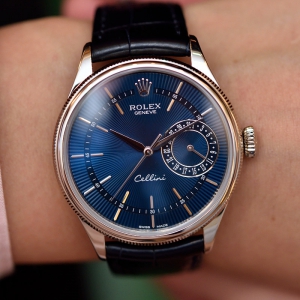 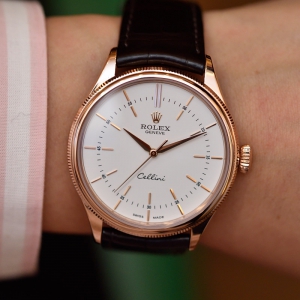 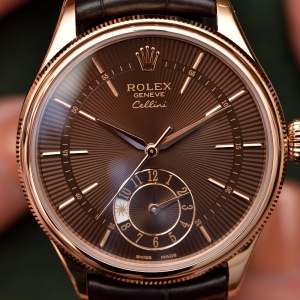 Photo credits: Rolex. Loupiosity.com.
All registered trademarks are property of their respective owners.
All rights reserved.

Rolex at Watches and Wonders 2022 At its first Watches and Wonders Rolex unveiled its latest collection of new watches for this year, which includes the platinum Day-Date 40, latest version of the Air-King or the 'southpaw' GMT-Master II.Girls don’t just wanna have fun – Part 23, Watches and… In this series we showcase mechanical and artistic wonders that were especially designed for women and others originally for men that come alive on spirited ladies’  wrists. We participated at the Watches and Wonders 2022 and we browsed a few novelties. Phillips Geneva Watch Auction: XIV Phillips Geneva Watch Auction: XIV will be held on 5 and 7 November in Geneva. There will be two sales events on the two days with very interesting haute horlogerie rarities.