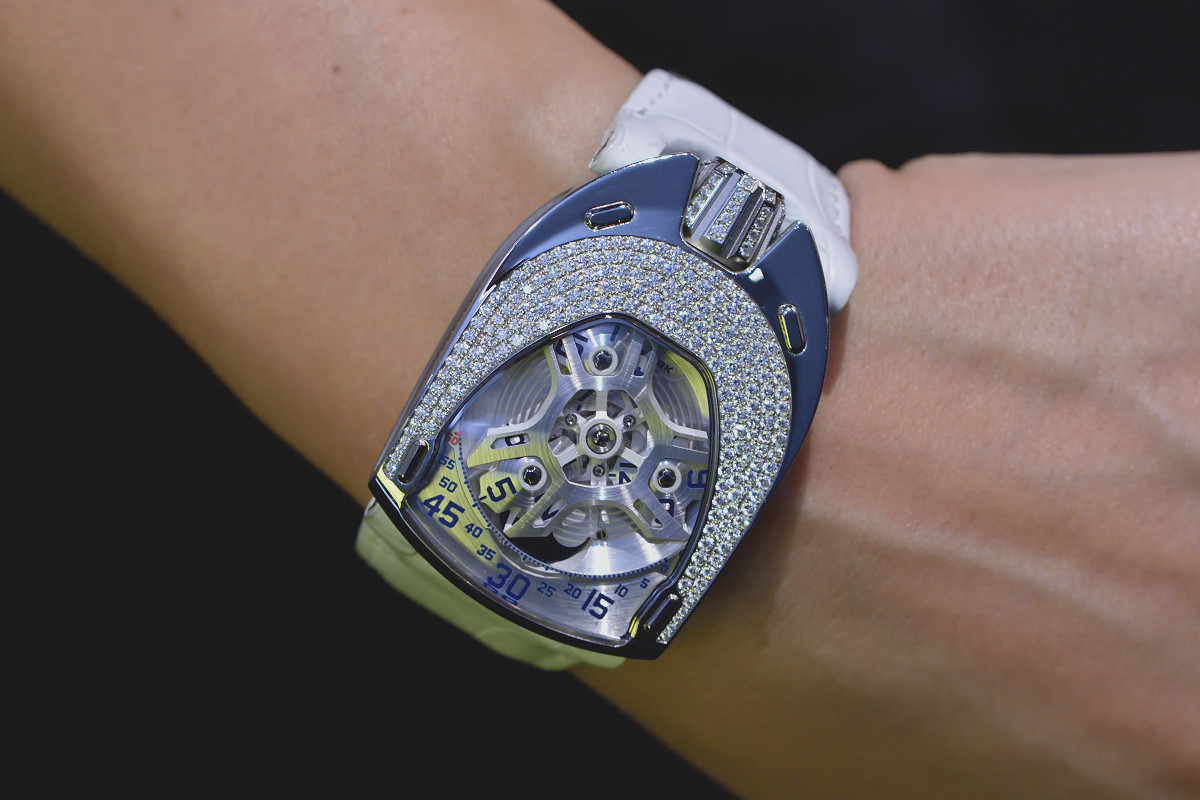 Not that it would be a novelty in 2016, but it was nonetheless introduced recently and the URWERK UR-106 Lotus is quite a phenomenon at the booth at SIHH. “We never made watches for men and watches for women because we never thought in those terms when we put our ideas down on paper”, says Martin Frei chief designer and founder. Still, their clients have been predominantly male. The Lotus became the first URWERK timepiece which is intentionally gender targeted. Naturally, the design and technical attributes are rooted in the same soil, and the UR-106 Lotus is far from the typical ladies’ pieces. The curves of the case remind me of a closed tulip, the petals of which enclose the rotating hours discs.

“We wanted to create a clean, elegant and feminine watch, and I must admit that we found this new challenge quite demanding. But thinking about the remarkable women who have accompanied URWERK from the start made us take the step.” – Felix Baumgartner added.

Two types of Lotuses appeared, one completely black, while the another pure white and silver. The lent itself: one’s for dark and the other’s for charming princesses.

The black has a PVD coated steel case with a titanium crown and is set with black diamonds. The dark princess’ gloomy hours are marked by harsh neonish green numerals circling around. The white lets the steel and the white diamonds shine over the blue numerals. The colours of the leather straps match the moods of the pieces. Both have moon phase indicator in lapis lazuli with a pretty cool printed circuit board-like pattern.

The timepiece features a revised version of the brand’s satellite hours (you can also find the complication in the UR-210, the UR-1001 or the UR-202) with satin-finished components.

Despite the unusual shape it fits very nicely on women’s wrists. In fact, 22 of them do, as they come in 11-11 limited pieces. 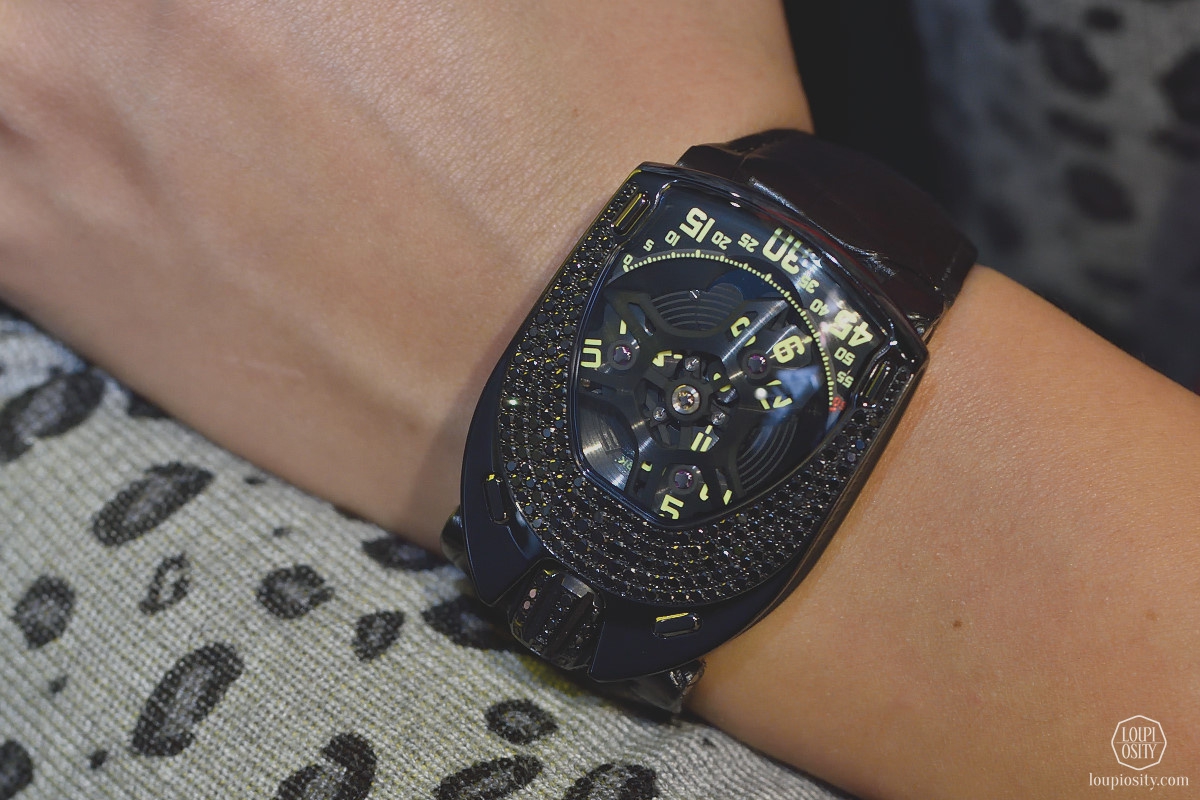 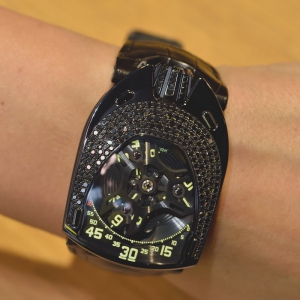 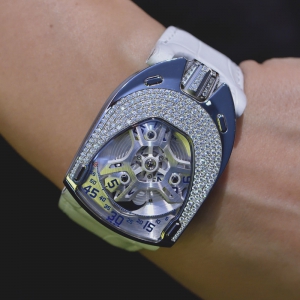 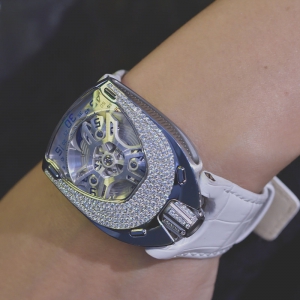 The UR-105 already had many versions; red gold, full black or the technoish Black Lemon/Orange. Now here is a real predator, the UR-105 T-Rex with a reptile “skin”. Being face-to-face with it on an eye level, it reminds me of a cobra poised to attack. 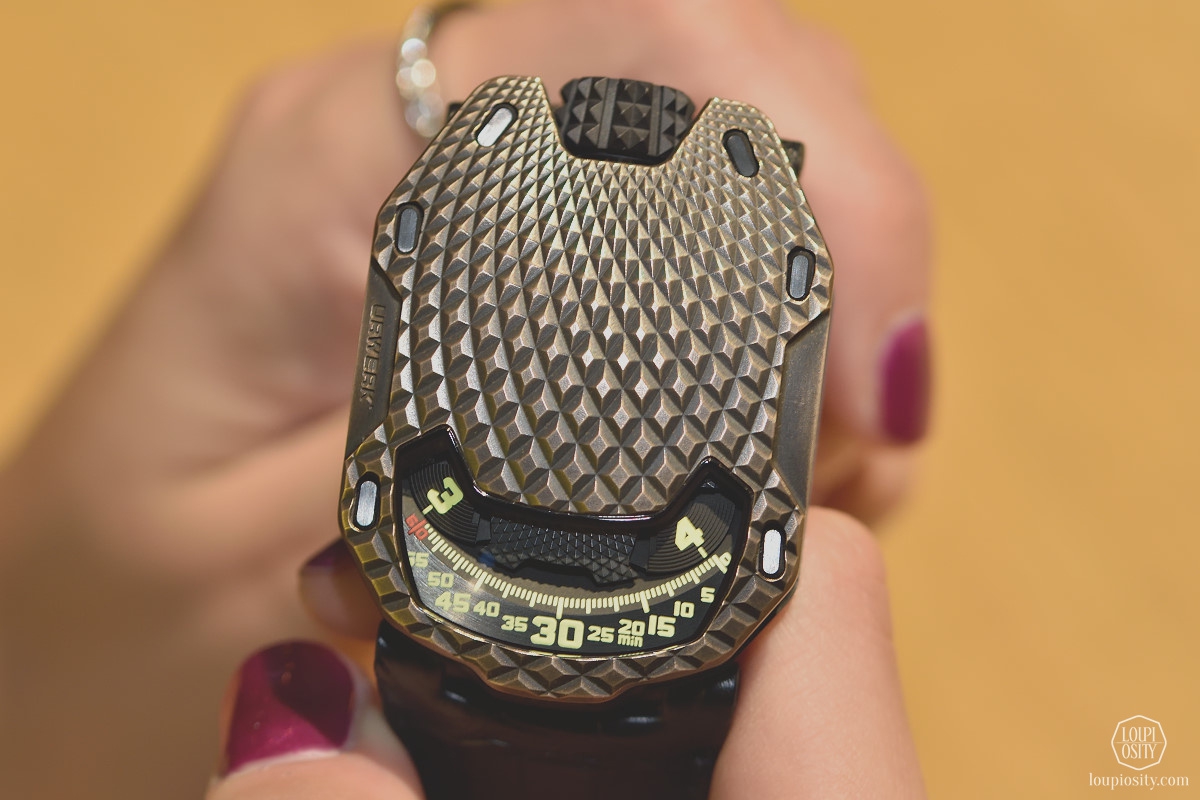 The scales immediately reminded me of the amazing British fashion designer and couturier, Alexander McQueen’s Plato’s Atlantis collection (Spring 2010), for which he used fabric with the computer-generated patterns of reptiles and marine creatures.

The length of the case is 53mm which seems to be big, but it sits well on the wrist. The case is hand-patinated bronze with a black PVD titanium belly, which also gives a view onto the double turbine that regulates the winding of the automatic 5.02 UR movement. Turbines can be adjusted by a lever: in “FULL” position, even the slightest movement is leveraged to wind up the mainspring, while at “STOP” no energy is generated and stored at all.

The crown, reminiscent of a mace from the Middle Ages, is particularly cool. 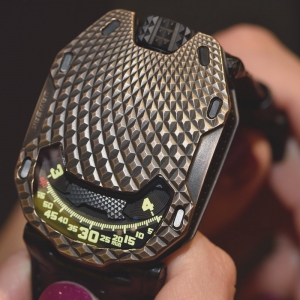 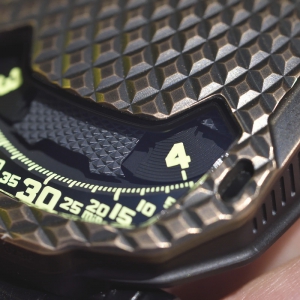 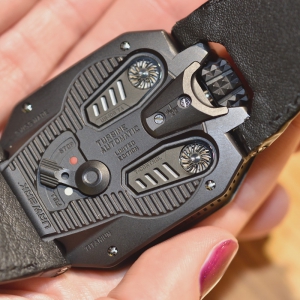 The EMC was presented in the summer of 2013. URWERK demonstrated the high quality of their in-house movement by offering electronic measurement of the mechanical accuracy. During the day, when the wrist is in constant motion, the balance wheel is under different forces from various directions, which has of course an impact on precision. The watch enables its wearer to monitor both its timekeeping performance as well as the amplitude of the balance, which is a great attribute to it.

The collection made by the brand’s ‘experimental laboratory’, the U-Research Division, has been expanded by the EMC Time Hunter in 2016.

Compared to the previous EMCs, it finally put the time display at large in the centre of the piece. Just as in the previous models the electronic measurements happen by charging the capacitor with the fold-out crank handle, but in this watch it is displayed on a dual scale. First it shows how many seconds per day the movement is slower or faster than ideal, and then the amplitude of the balance wheel in degrees. It should normally be somewhere in between 220 and 280 degrees. 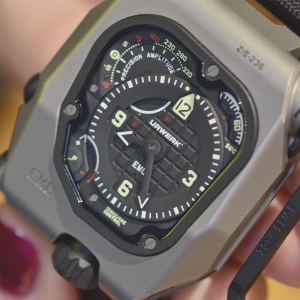 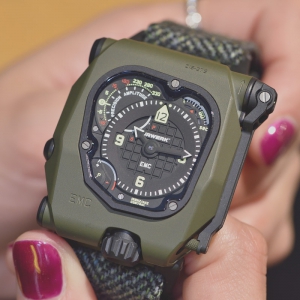 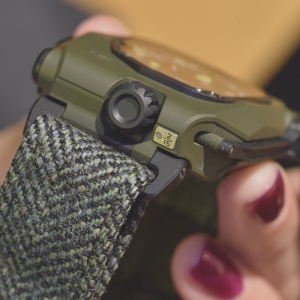 URWERK - Geneva Watch Days For the Geneva Watch Days, URWERK set up in a beautiful suite with a lakeside view at the Beau-Rivage to introduce their latest novelties. We saw the unique UR-T8 Raptor piece and the EMC Time Hunter Desert Sage.TimeForArt TimeForArt is the first-ever benefit watch auction to support contemporary art, initiated by New York non-profit Swiss Institute. The auction will be part of the Phillips ‘New York Watch Auction: SEVEN’. Equal Pay Day at Nomos Glashütte This March sees the International Women’s Day and the Equal Pay Day in Germany—both serve as reminders that discrimination still exists. Approaching these, NOMOS Glashütte invites all to improve gender equality by setting an example themselves.