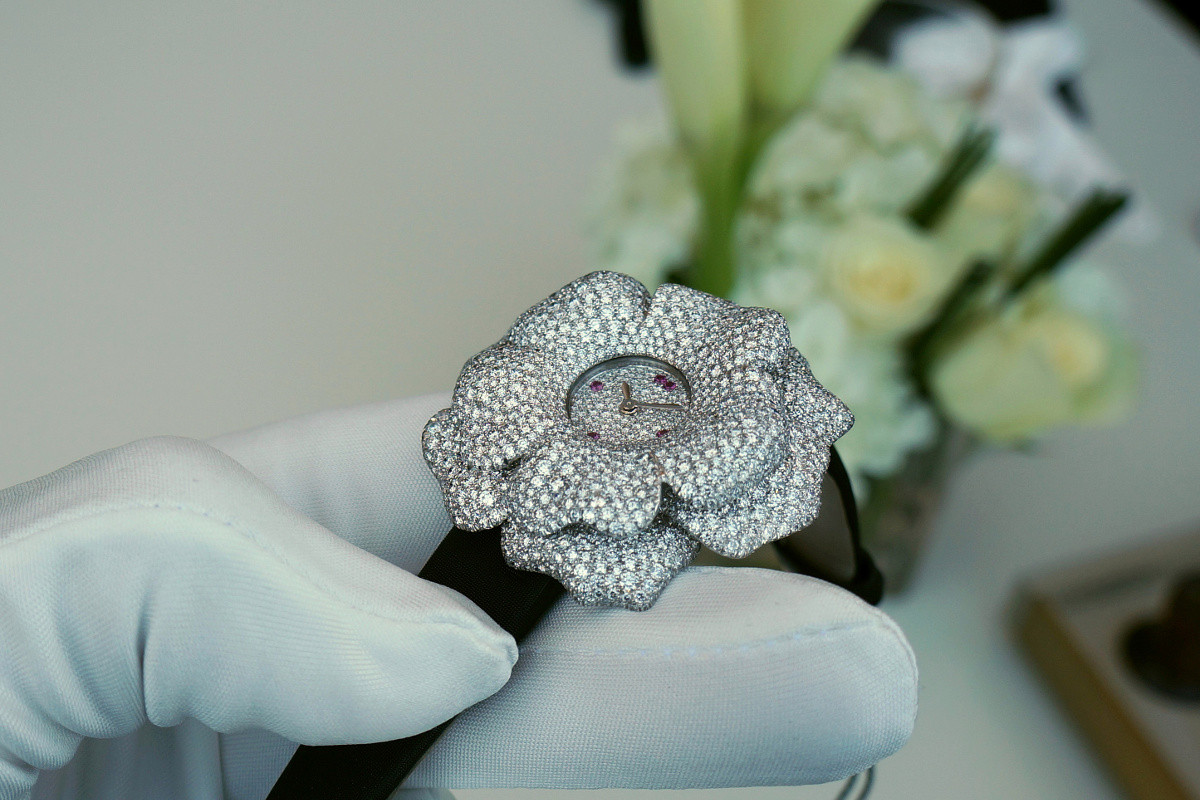 SalonQP, the UK’s premier fine-watchmaking exhibition, took place in Chelsea, London, from 12-14 November. The location was once again the Saatchi Gallery, established in 1985 by British business man Charles Saatchi, the co-founder of the Saatchi & Saatchi agency. The Gallery has been one of London’s eminent art venues ever since. The brands displayed their pieces in several rooms on the 3 storeys of the gallery. Seminars and sessions guided visitors into different segments of the fine watchmaking field. Thematic exhibitions, such as FHH’s “Inside A Second” about the history of chronographs or the “Gems of Time” about jewellery watches, offered a lot for participants to learn. The Grand Prix d’Horlogerie de Genève brought the winners of 2015 to the show.
Please find the photo gallery of SalonQP about the bustle here.

This year at Salon QP we focused a little more on feminine jewellery timepieces.

The first seminar on 13 November was given by Sasha Slater (Deputy editor of Harper’s Bazaar) and Caragh McKay (editor of Telegraph Time and curator of the aforementioned Gems of Time exhibition) titled “Gems of Time: the high jewellery watch”. It addressed five fabulous jewellery and watch brands.

If we say Bulgari, many of you probably say Elizabeth Taylor. Her jewellery collection was renowned as one of the greatest. She was passionate about Bulgari jewels and throughout her life she owned many one-of-a-kind pieces representing the brand’s distinctive style. Her taste and glamour was the perfect match for Italian jewellery culture; typically curved shapes, bold and daring colours and splendour. As her two-time ex-husband and co-star Richard Burton said: “The only word Liz knows in Italian is Bulgari”. The Diva collection – including the colourful, gemstone-set jewellery watches – are dedicated to the “beauty of women”. The pictured version is cased in 18k pink gold and has a white mother-of-pearl dial. It is set with 286 brilliant-cut diamonds, 8 rubellites and 8 amethysts. 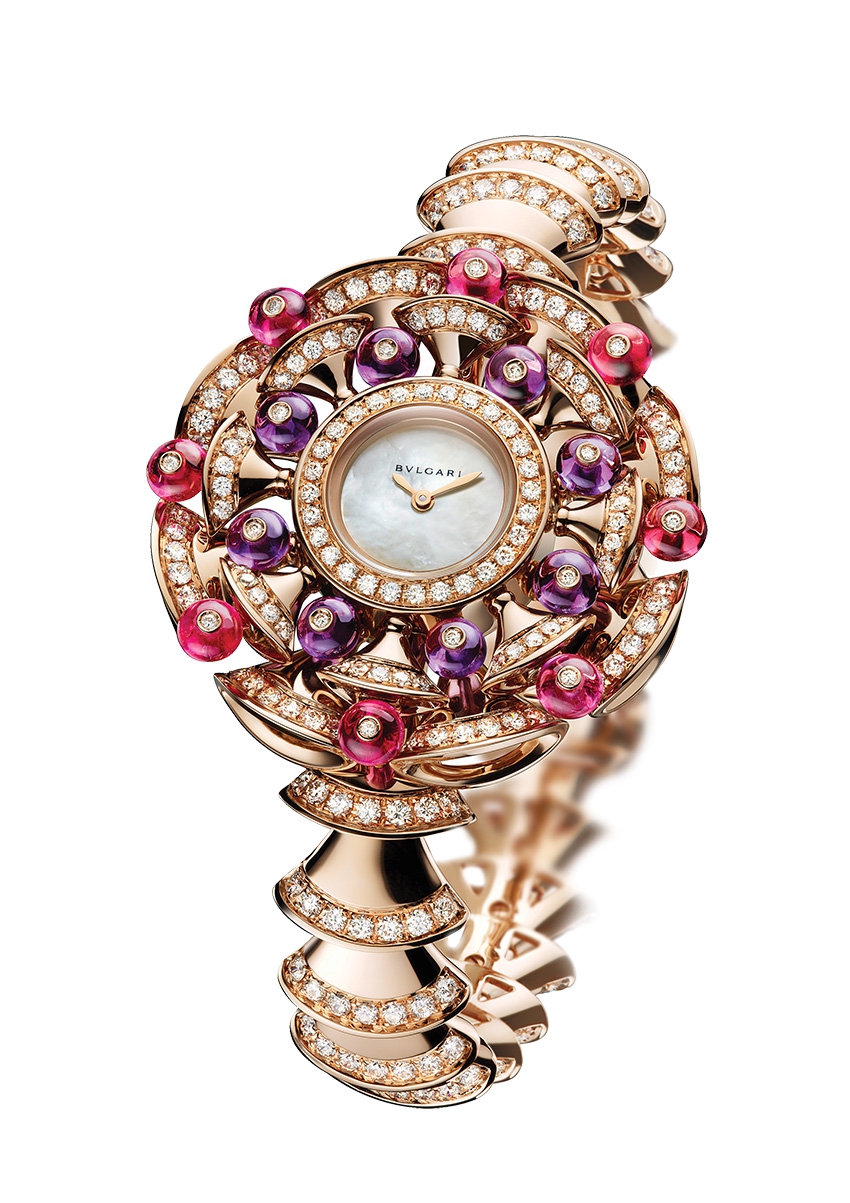 Another icon, another Maison – the Piaget Traditional Oval and the cuff watches were also worn by Jacqueline Kennedy Onassis. These are extremely feminine and fine pieces, which can even be worn as jewellery. The horizontal oval dial and the precious metal bracelet are particularly characteristic. Jackie Kennedy’s refined “jet-set style” was perfectly fitting and in fact defined the so called “Piaget Society”. Piaget celebrates this elegance with the contemporary versions of cuff watches, such as the Extremely Piaget cuff watch or the Limelight Couture Précieuse Cuff Watch. 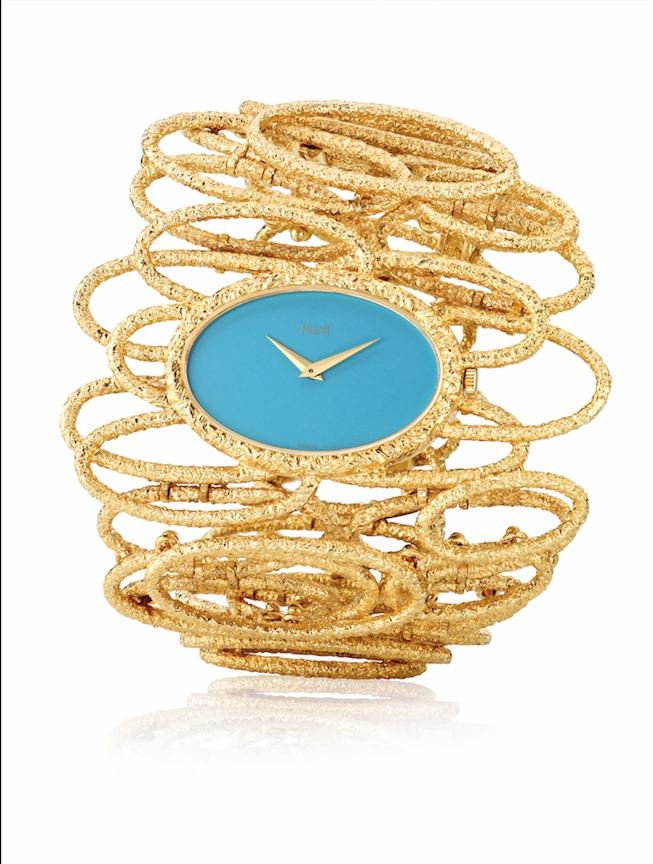 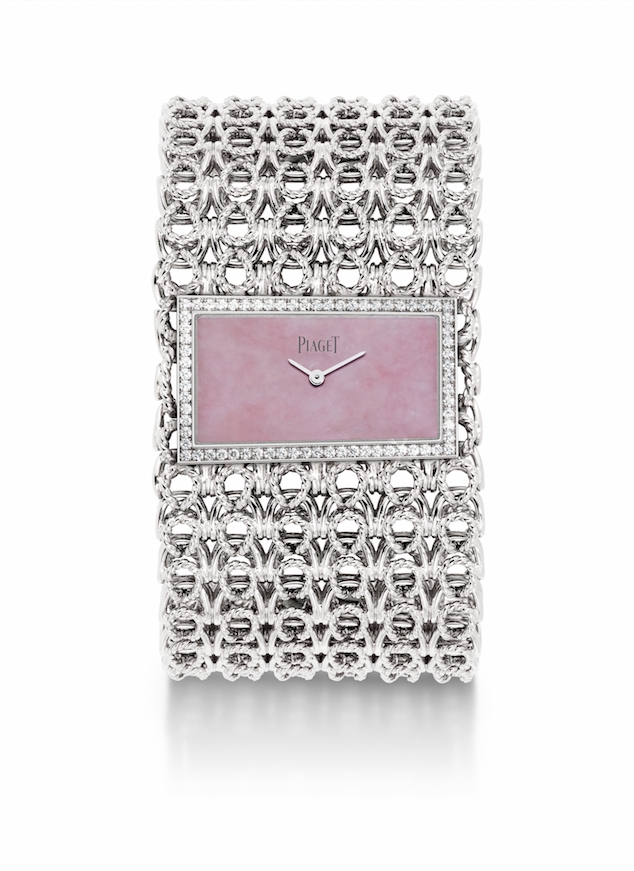 Backes & Strauss brought the unique Piccadilly Princess Royal Emerald Green timepiece to the event, which was created in collaboration with Gemfields. This watch is all about emeralds: 245 Zambian emeralds with 10 different cuts for a total of 31.91 carats. The Piccadilly Princess Royal creations are inspired by the works of John Nash, a British architect responsible for much of the layout of Regency London (c.1810-30) under the patronage of the Prince Regent (later George IV). 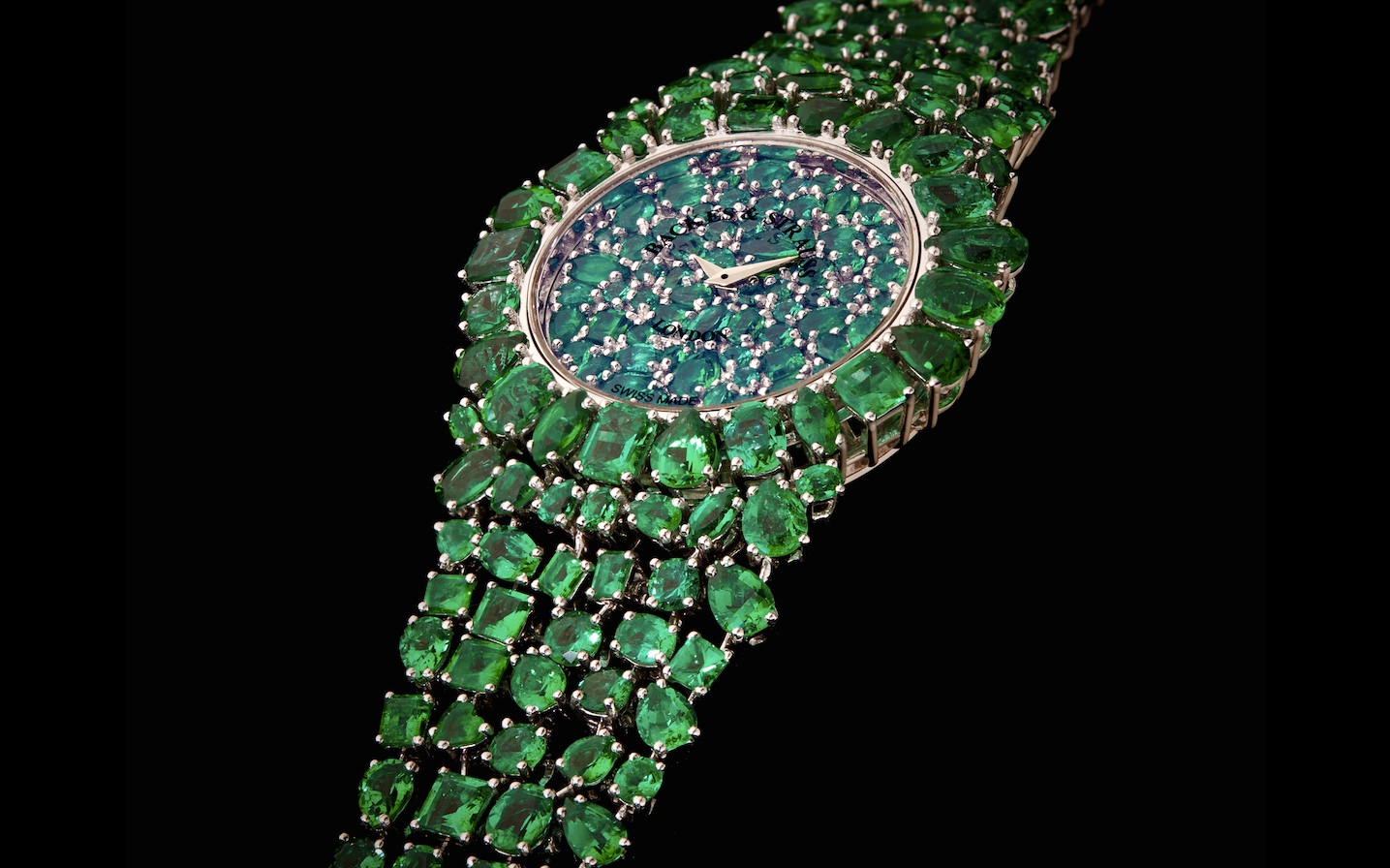 Harry Winston praised femininity with butterflies. For the House these were not only beautiful creatures but also symbols of the soul, powerful transformations and the divine feminine energies. The Premier Precious Butterfly, the Premier Feathers and the Premier Precious Marquetry collections showcase different artistic techniques to make the jewellery timepieces come alive. For example the Precious Butterfly was created by using the fragile, yet extraordinarily iridescent powder found on butterfly wings. 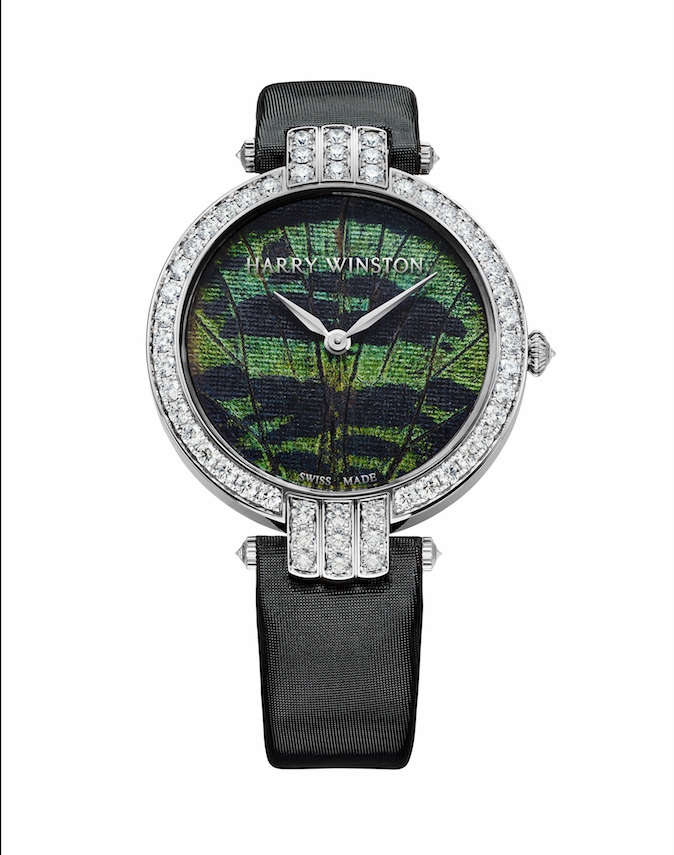 The Grand Maison is well known for its jewellery pieces, which are not only beautiful but also excel in the area of fine watchmaking. Jaeger-LeCoultre’s tiny movement, the Calibre 101 is the world’s smallest manual calibre originally built from 74, now extended to 98 elements. It is only 14 mm long, 4.8 mm wide and 3.4 mm thick. Queen Elizabeth II of England wore a 101 jewellery watch on Her Coronation Day in 1953. The brand has a great expertise in gem setting: the Montre Extraordinaire La Rose shines on the wrist with nearly 14 carats of diamonds, finished in the most complex of setting techniques: snow-setting. 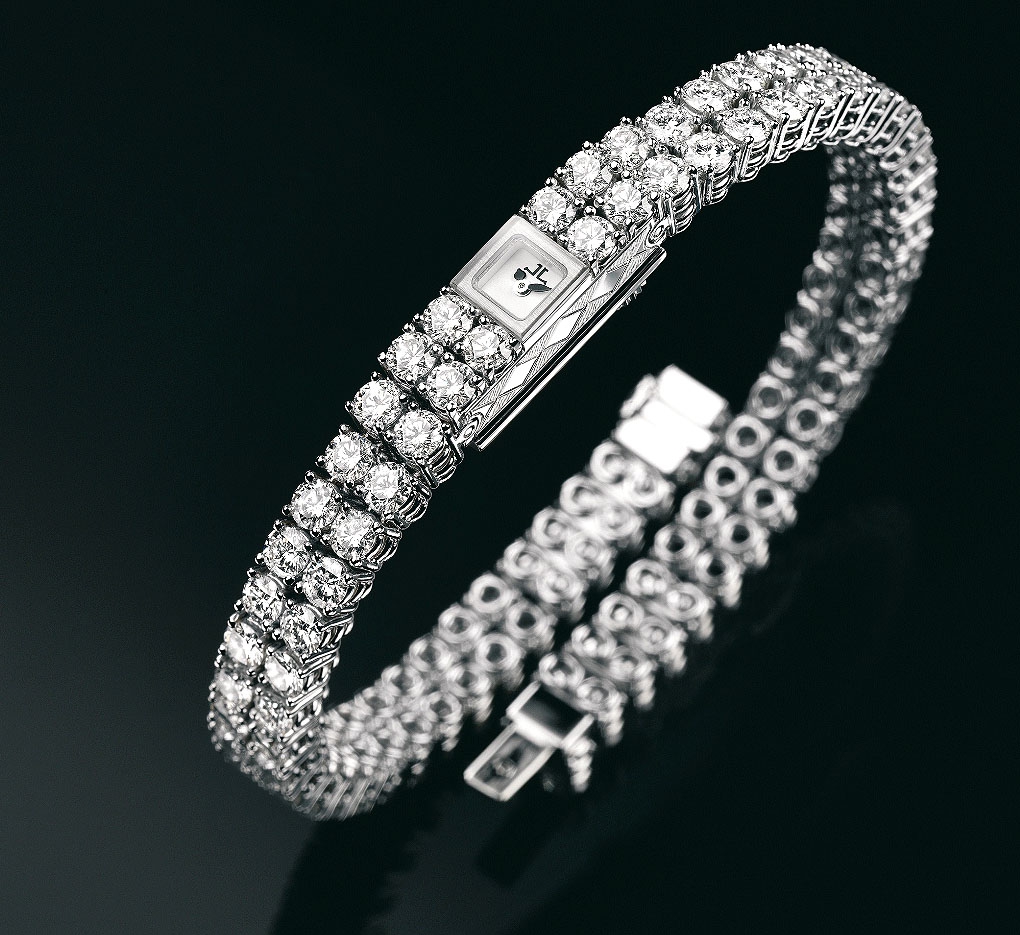 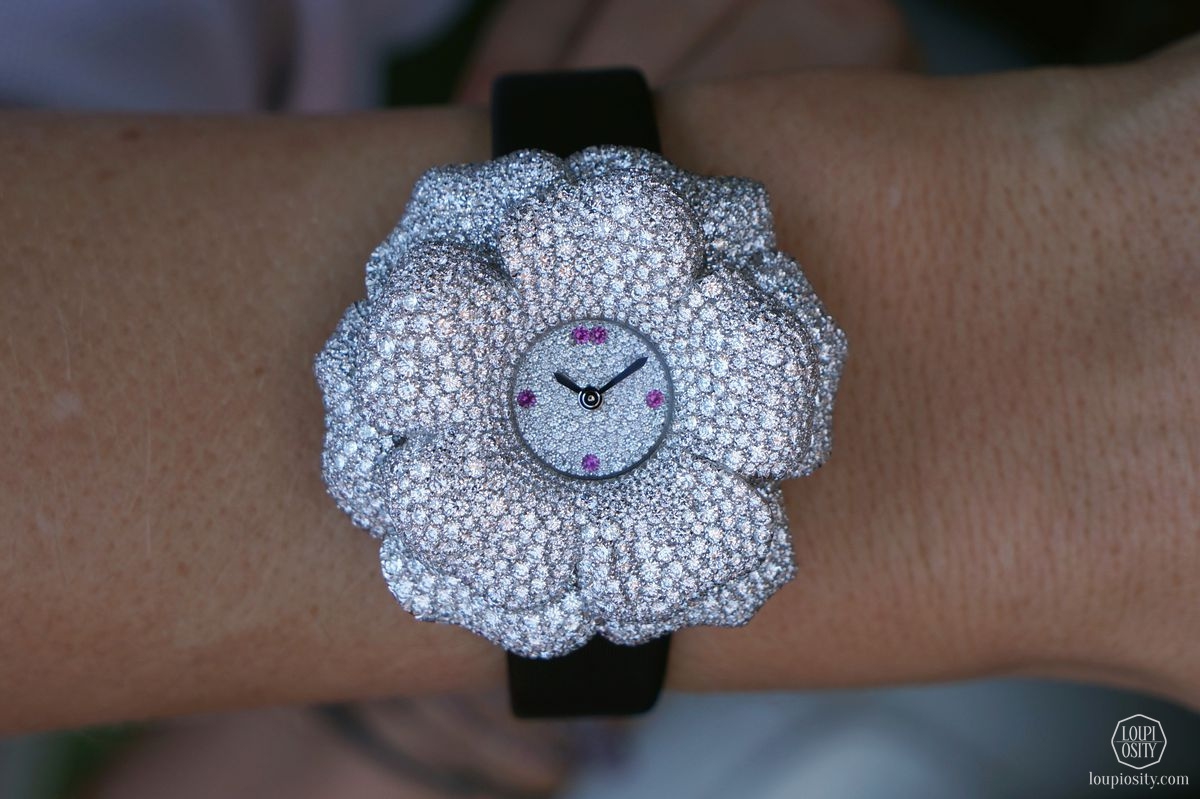 In the afternoon we delved deeper into the world of gemstones with Daniel Struyf, Senior International Jewellery Director of Bonhams, at the seminar “Gems of Time: Coloured gemstones reign supreme”. He talked about the interesting market of coloured gemstones. While for diamonds the 4Cs (Colour, Cut, Carat, Clarity) and the Rapaport list (which is the primary source of diamond prices and diamond market information, started by Martin Rapaport in 1978) help the pricing, other coloured stones lack such indicators.

Ruby, sapphire (gems of the mineral corundum) and emerald (a variety of the mineral beryl) are the “big three” but other gemstones receive more and more attention, too. For instance, the Hope Spinel. Spinel might be not a typical “blue-chip” at auctions, but the well-formed and nicely coloured spinel crystals are in high demand among collectors. It is a gemstone that occurs in a wide range of colours (from red and pink to blue and mauve, dark green, brown, black). The Hope Spinel is an important, rare, historical gemstone, which was formerly part of the esteemed Hope collection of jewels. It was not for sale in the last 98 years until in 2015 it was sold for £962,500 at Bonhams – a new world record for a spinel. The stone is from Tajikistan, from one of the eldest mines, the Kul I Lal.

Various price-changing factors were also elaborated by Daniel, such as different colours, rarity, the origin, the provenance and the presence of treatments (it is highly desirable for sapphires not to be heated, and emeralds not to be oiled) and perhaps the most important: the chemistry.

I visited Daniel at Bonhams for a private preview of the 5 December Fine Jewellery auction pieces, which will include a H coloured 14.24 ct diamond ring retailed by David Morris, a pair of perfect natural seawater pearl earrings and a 2.97 ct diamond with an exciting Fancy Grayish Blue colour (VVS2 clarity). Check them out.

BOTANICA: Blue Book 2022 by Tiffany & Co. This June, Tiffany & Co. introduced new floral-inspired masterworks for its ‘BOTANICA: Blue Book 2022’ Collection which showcases the latest high jewellery collection of the House debuting in London.The OAK Collection exhibition On 19 May, 162 vintage and contemporary museum-quality watches of the OAK Collection embark on a four-stop exhibition world tour from the London Design Museum (19-25 May). We sum up the 11 exhibition chapters and give you updates as we participate in the pre-opening ceremony on 18 May.Engraved Gems at L’École, School of Jewelry Arts This June we are finally back to Paris - first of all to participate in the Révélations 2022 but of course there is always so much to discover there. Among other exciting events, we visited the Engraved Gems exhibition at L’École, School of Jewelry Arts just around the corner from Place Vendôme.