On the Silk Road with Piaget 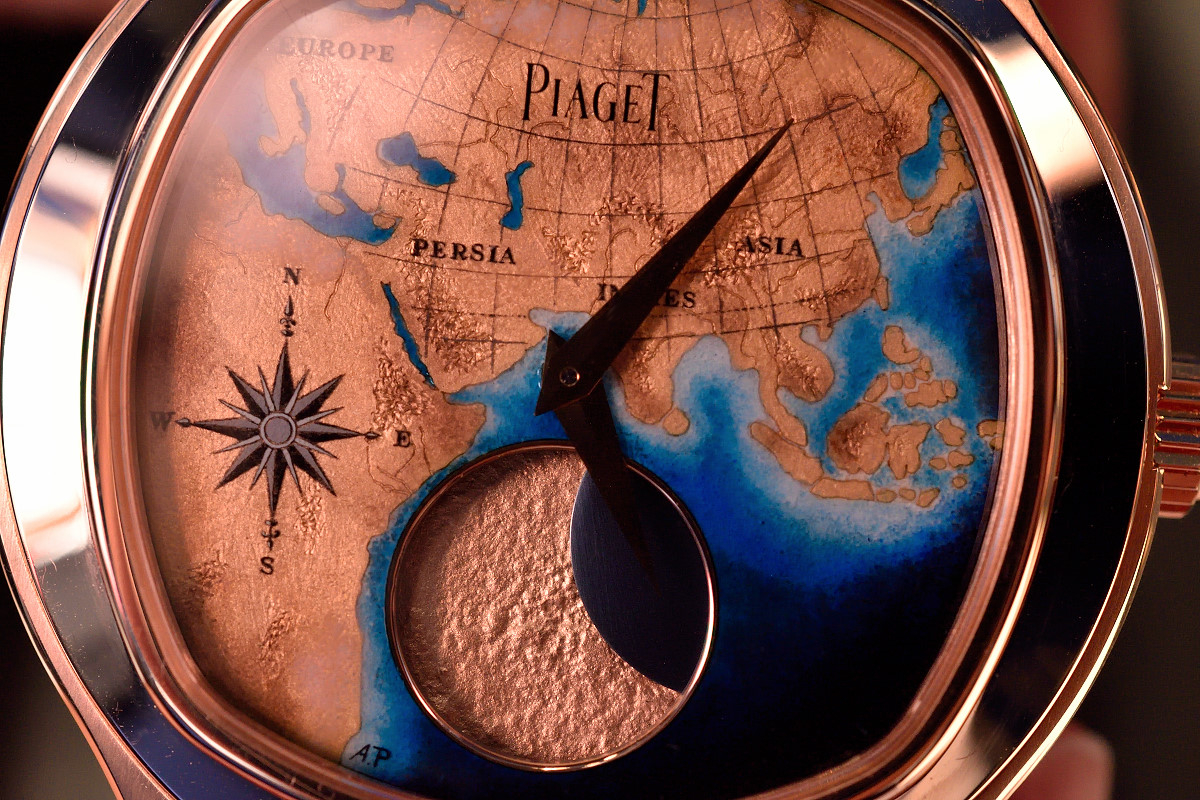 It was this summer at the Paris Fashion Week, when Piaget took us on a magic carpet ride and flew the audience to the faraway city of Samarkand and somewhat closer to Venice. The high jewellery collection introduced was themed around these and ancient motifs appeared in contemporary settings. We were also given a hint that the story would not end here…

The Watches and Wonders exhibition in Hong Kong witnessed the debut of a timepiece collection born under the same stars. We were delighted to hop on the magic carpet again and be part of the event.

There are not many watch brands that also master high jewellery making and vice versa. Piaget is one of the few that excels at both arts. 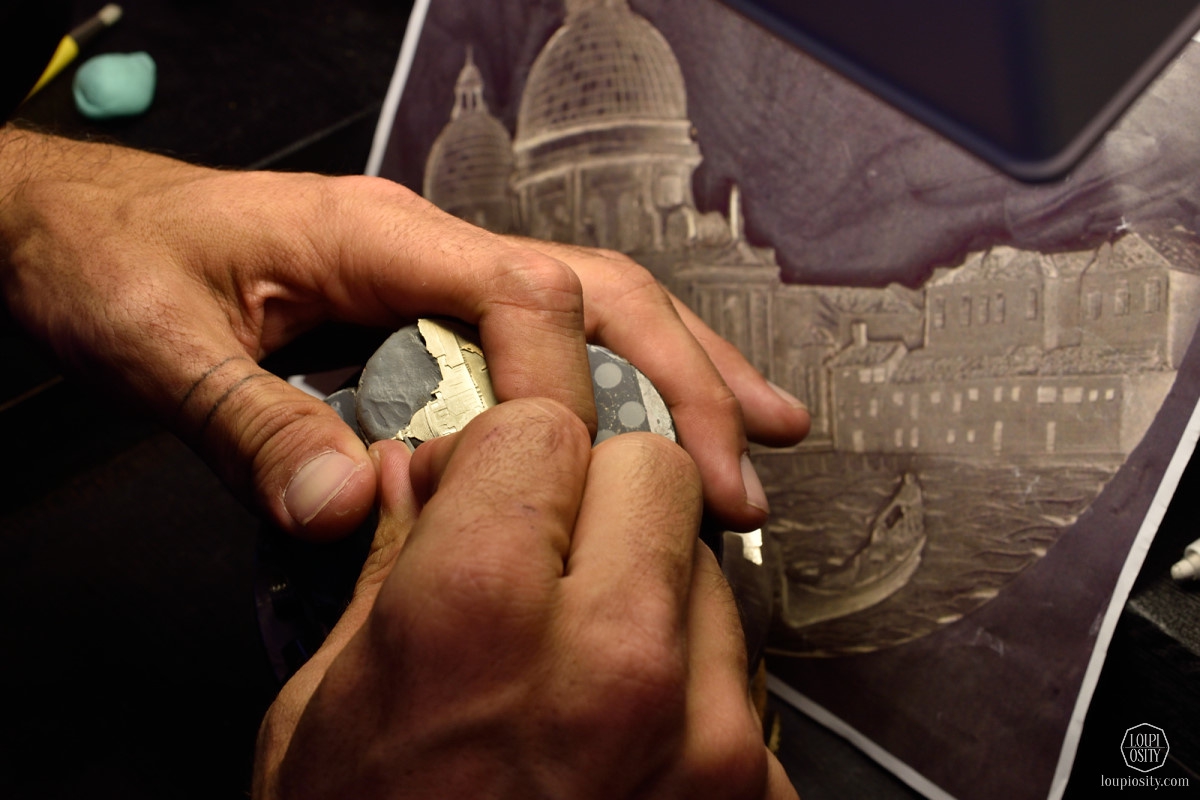 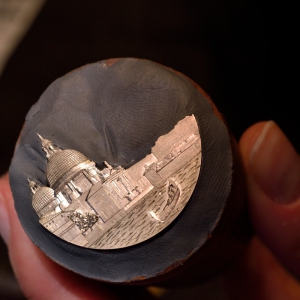 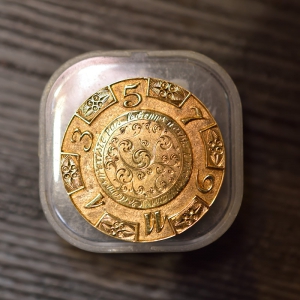 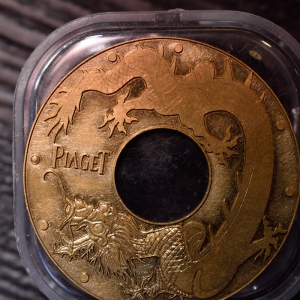 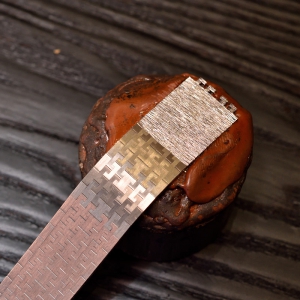 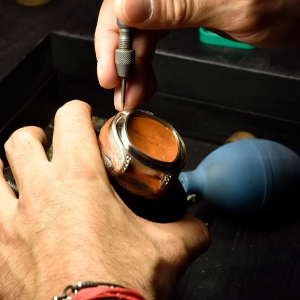 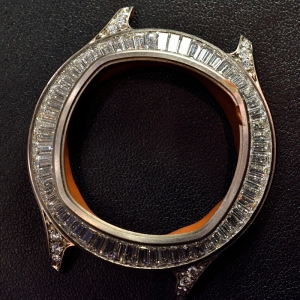 The new, highly creative Secrets & Lights timepiece collection consists of 40 pieces, out of which we selected a few this time.

Probably the most astonishing piece immediately establishes the link between Samarkand and Venice. The dial of the Emperador Coussin XL Lune Astronomique depicts Asia, the Middle East and Europe connected by the famous trade artery, the Silk Route.

The Silk Route was one of the most important goods and cultural exchange paths between the East and West for over 1,500 years winding from China to the Mediterranean. Cities, such as Samarkand (situated in what is Uzbekistan today) born and grew big thanks to the flow of goods that provided economic and social prosperity. From the 8th until the 15th century, the Most Serene Republic of Venice and neighbouring maritime states held the monopoly of European trade with the Middle East. Venice controlled commerce in the Mediterranean and influenced that with Asia over the Silk Route. The famous Venetian merchant and explorer Marco Polo walked and traded along the Silk Road between 1271–1295 and documented his stories in the Middle East and Central Asia in a book called Livre des Merveilles du Monde (Book of the Marvels of the World) in around 1300. He also mentions Samarkand being “a very large and splendid city…”.

The dial of the timepiece, which looks like the ancient map of Marco Polo just unfolded, is calling you for a quest across deserts, oases, mountains, plains and seas. The details are amazing – it is crafted using the champlevé enamel technique with miniature enamel-painting. Providing a compass on your journey, a nautical wind rose is also depicted. Next to it moon phases can be observed in a generous opening with a rough golden surface reminiscent to that of the faithful planet. The driving wheel for this complication has 135 teeth and it delivers great precision – a one-day correction is required after 122 years. The dial is placed in a circular 46.5mm rose gold case, hiding a Piaget 860P automatic movement. 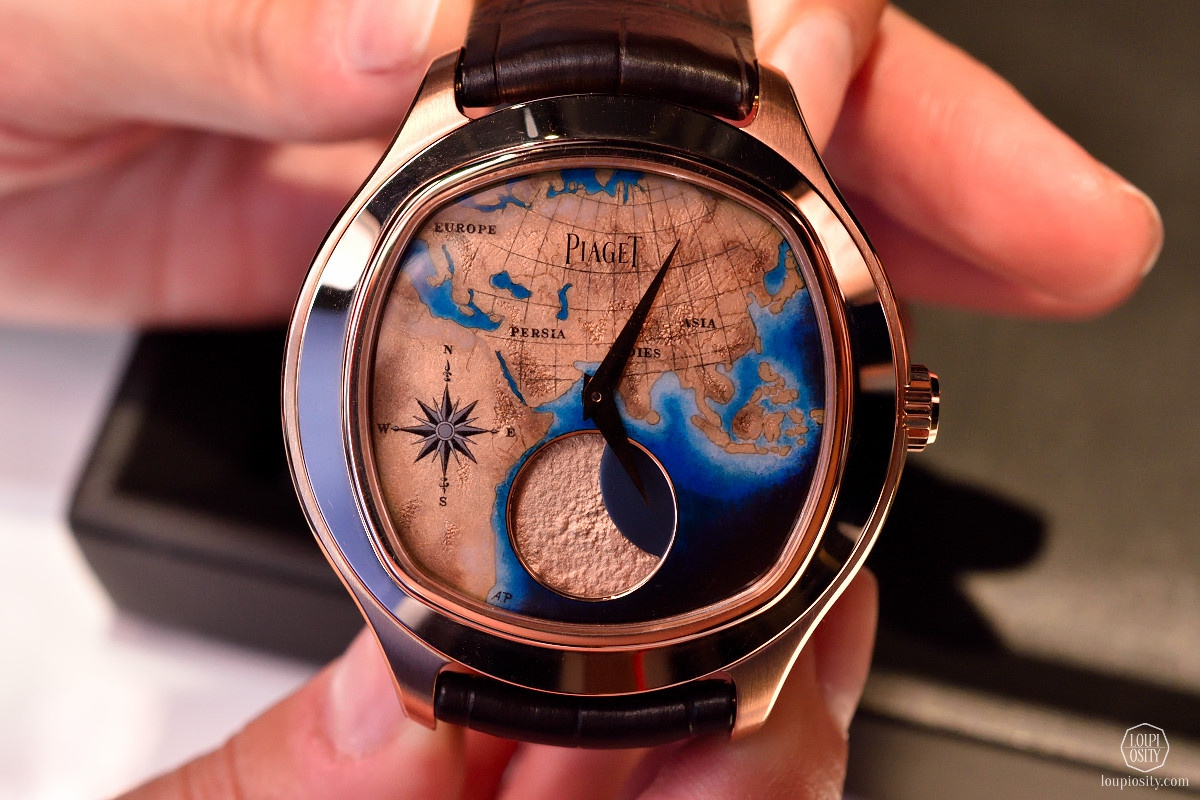 Samarkand is an exotic and fascinating place and known as one of the oldest inhabited cities in Central Asia. Its name means the “Queen of the Earth”. A few timepieces in the collection bring the beautiful geometric patterns of the Samarkand buildings and mosaics to us. Motifs include six-pointed stars created by intersecting lines.

The Limelight Secret watch recalls some of the finest decoration in the region via mother-of-pearl and engraved gold star marquetry, which reflects the style and the splendour of the historic buildings. Delicacy is further elevated by the “Piaget-signature” hand-engraved pink gold strap, the birth of which we could admire at the scene.

The Altiplano Gold Guilloché Dial has (just as the name says) a gold dial with guilloché engraving, also inspired by Samarkand architecture. It is a pink gold watch with dimensions that ensures comfortable wear – 40mm in diameter with a very thin case. 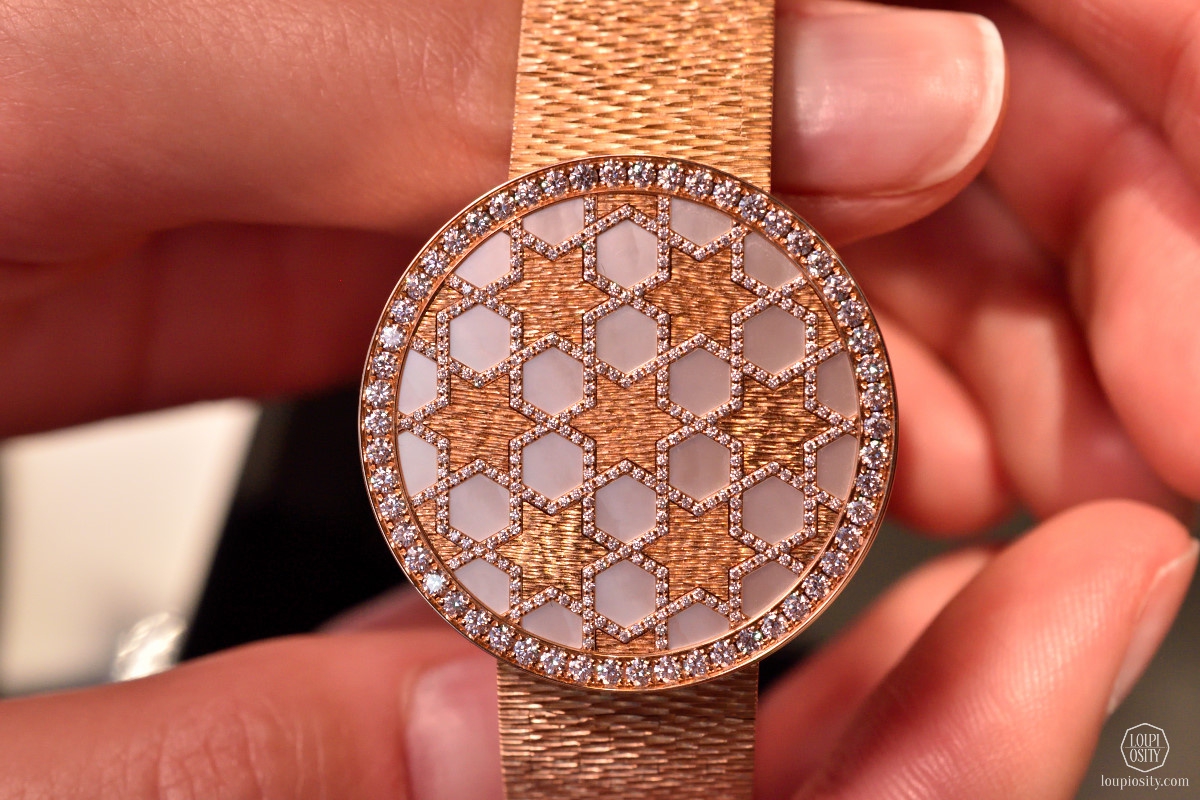 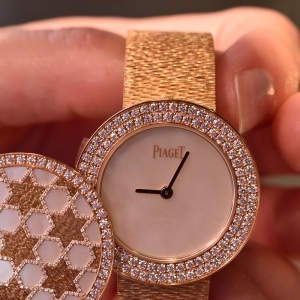 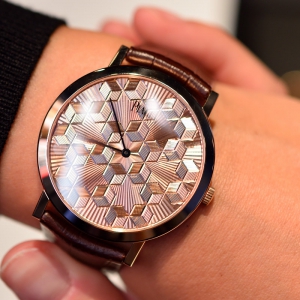 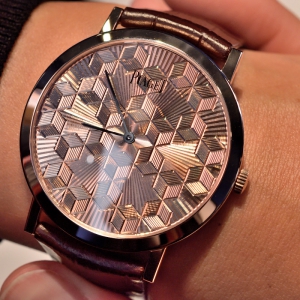 Back to Europe, about 6000 km from Samarkand lays Venice. Piaget maintains a cultural patronage relationship with the city, as they offered their watchmaking expertise and support to the restoration of Venice’s invaluable clocks. The work, which commenced in 1997, has included the complete restoration of the mechanism of the Clock Tower and the clock of the Palazzo Ducale.

Inspired by the dial of the Clock Tower, a magnificent zodiacal arc adorns the 40 mm yellow gold Altiplano Enamel watch. The timepiece is graced with 12 appliqués of the astronomical signs that are engraved and then applied to the dial. The base of the surface is night blue enamel, made with the technique of pailloné (spangled) enamelling.

In the pailloné technique, a very thin precious metal foil is placed between two layers of enamel. Due to the transparency of the enamel the foil lends a shiny and statuesque surface to the dial. The first step is cutting the paillon (a piece of foil). Then the paillon that has been cut to shape is placed on the dial, adjusting it to its later position. Under a magnifier the foil is coated with the enamel technique (a coating made of melted and fused glass powder) and the whole piece is fired at a high temperature.

Venetian architecture is influenced by many cultures – the former glamorous empire was dazzlingly cosmopolitan with trade relations to every part of the known world. Art in Venice was daring, colourful and dictated “fashion” across Europe for long time. The Altiplano Double Jeu Plique-á-Jour Enamel ladies’ watch bears the architectural motifs of the era. The white gold case is set with 73 brilliant-cut diamonds (approx. 2.52 cts). On the openable lid plique-à-jour enamel and diamonds make up the pattern. The enamelling in is tricky to do: they apply it layer by layer from the sides of the white gold metal setting towards inside. Firing happens after each layer many times during the process resulting this gradient in colour. Lovely, isn’t it? 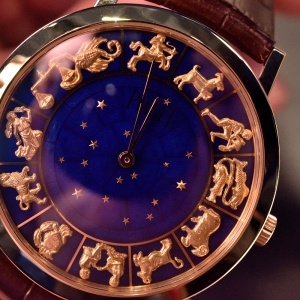 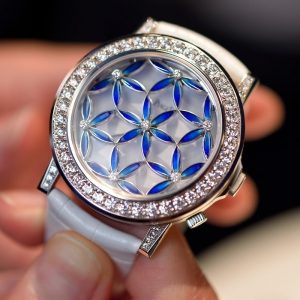 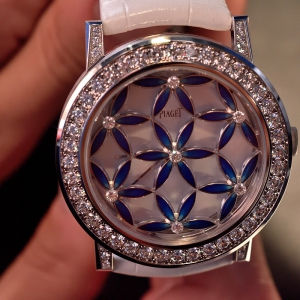 Although not in the Secrets & Lights collection, but let me commemorate Piaget’s first complication watch dedicated to women. Ladies have been pampered with beautiful designs and artistic dials true to Piaget’s motto saying “nothing is too beautiful for a woman”. For the first time the brand decided to dedicate a complication to women. Limelight Stella indicates the various phases of the moon, the lunar cycle. Calibre 584P was designed and developed in the Manufactures of La Côte-aux-Fées and Geneva and features the same 135-toothed wheel for the moon phase function as the Emperador Coussin XL Lune Astronomique.

Piaget is well-known for its shape-in-shape designs. In Limelight Stella the “oval inside a circle” lines give a very feminine and elegant appearance to the timepiece. There are pink and white gold versions, with or without diamond setting and a graceful selection of colourful straps. 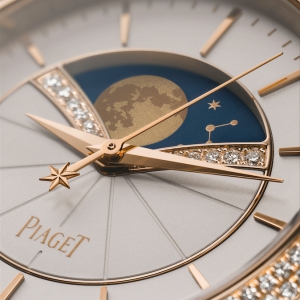 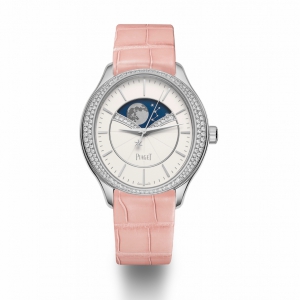 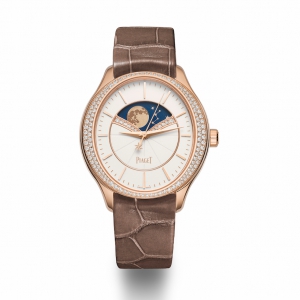 Piaget Sunlight Escape Piaget presented its latest chapter of High Jewellery, Sunlight Escape during the Paris Couture Week at the Piaget boutique on Rue de la Paix.The Piaget Society - Beach Longing for the summer and the sparkle of the azure sea in cold Geneva? Head into the pop-up beach Piaget created at the SIHH 2019. The sand hid the novelties that the brand introduced this January.Chopard Red Carpet 2018 The Chopard boutique at the corner of Place Vendôme presented the dream runway line-up of 71 creations and we went to see them.