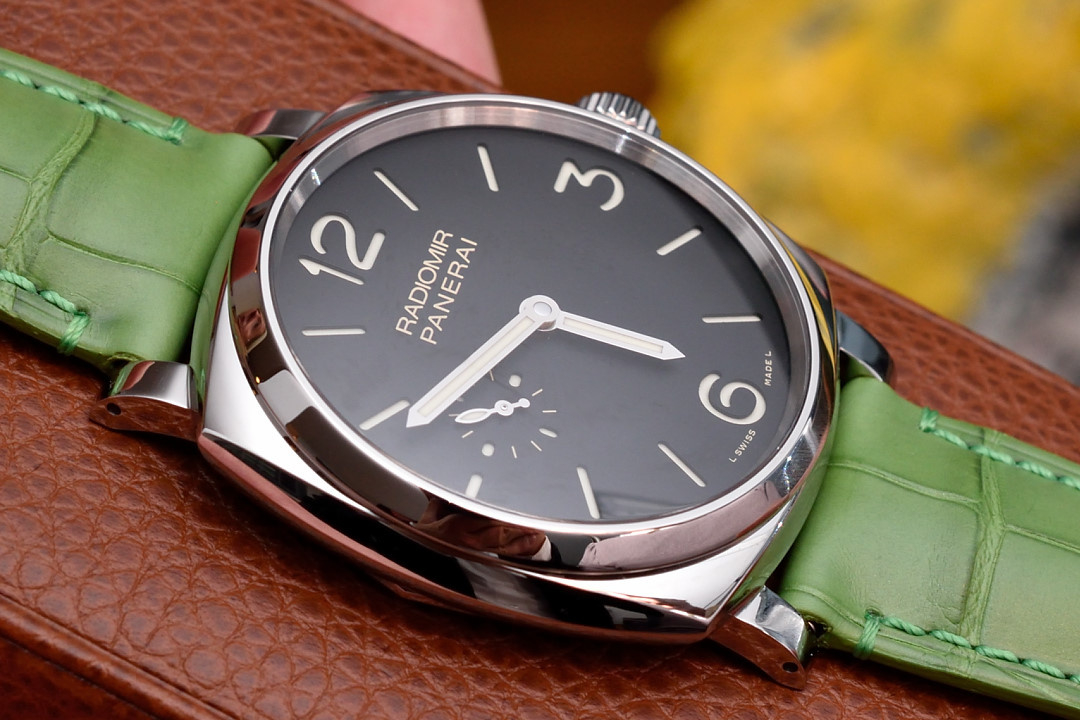 Beautiful Vienna called again and this time for a great Officine Panerai evening in the neighbourhood of St. Stephen’s Cathedral. The Penthouse 1010 provided an elevated setting to the presentation of the brand, which is responsible for one of the world’s most emblematic watch designs born in the depths of the oceans. The company, in the presence of the recently appointed GM of North Europe, Lukas Silies and European Sales Manager Carlo Ceppi, brought Panerai’s novelties from the Watches & Wonders 2015 exhibition to Vienna with the speed of light. 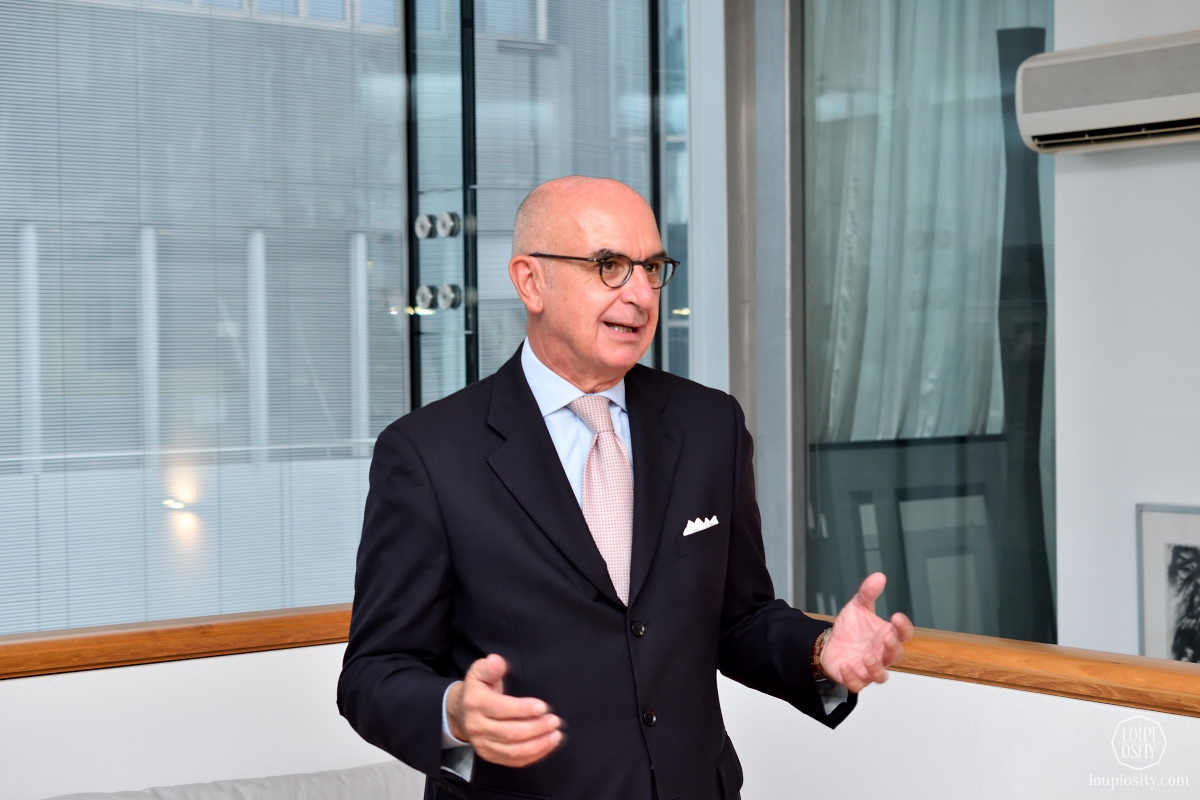 I don’t really think that when Giovanni Panerai established his “orologeria” in 1860 he did it with the aim of supplying professional dive gauges for the Italian Navy for almost 60 years. Nevertheless, history ground his teeth soon after the onset of the 20th century and the flow of events generated a new battlefield – underwater. WW1 brought a new threat to ships in the form of independent and human torpedoes. The latter was used by the Regia Marina (Italian Royal Navy), where frogmen steered the torpedoes to the enemy ships under the cover of the night and placed the warheads on the hulls, then drove away. Soon after the break-out of WW2 the Italian Decima Flottiglia MAS frogmen unit sank or severely damaged a number of ships, including two English warships: the HMS Queen Elizabeth and HMS Valiant during gruesome operations in Alexandria, Egypt. These circumstances raised the demand in the navy for clearly legible underwater instruments even in murky and dark seas.

Already during the 1910s Panerai experimented with a new radium-based powder they called “Radiomir” for which a patent was eventually given in 1916. The first prototypes of watches named after the luminous material appeared in 1936 and were made exclusively for the Navy. In fact, until 1993 Panerai did not produce watches for civil use. A new self-luminous material was developed in the late ‘40s and the patent for “Luminova” was received in 1949. Today, Radiomir and Luminor are the two main collections of the watch manufacturer, which since 1997 belongs to the Richemont Group.

Legibility as a requirement and the Italian sense for good taste had a huge impact on design. The cushion-shape, the two layer “Sandwich” dial, or the crown-protecting bridge that appeared on the Luminor series have grown up into a new, clearly recognizable and – in spite of the army background – lovable character in the world’s theatre. 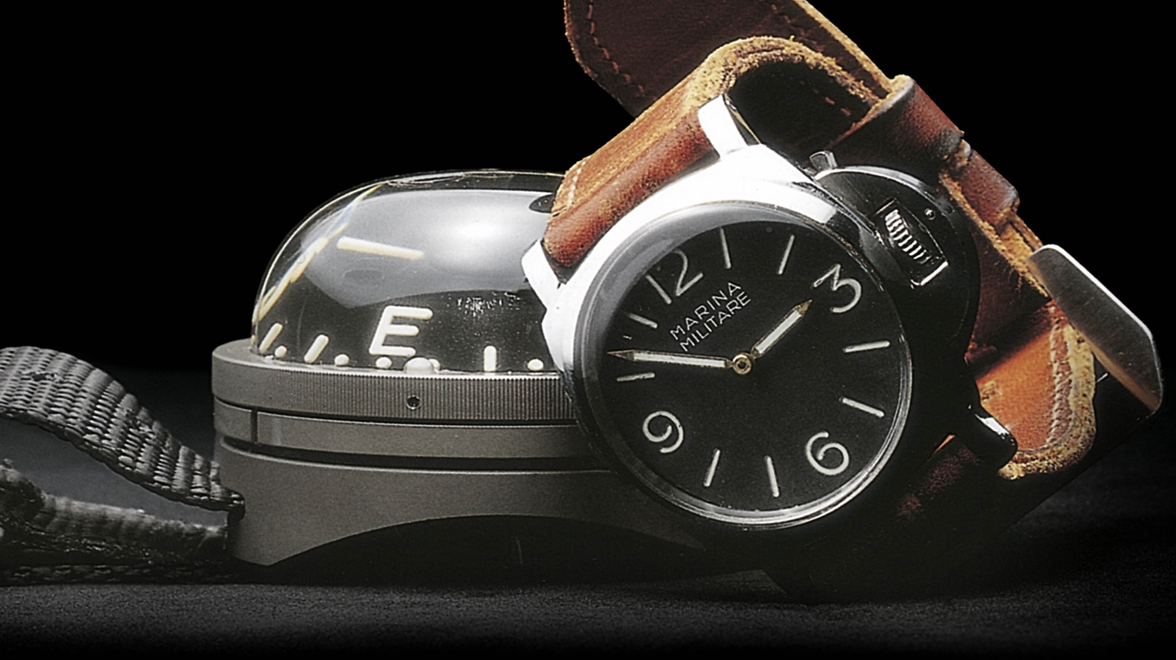 Throughout the years the brand not only developed watches, but gathered a host of fanatic followers and collectors too, who call themselves Paneristi. Past watches by nature and the new Special Edition timepieces by decision are limited and are sought after by aficionados. The original boutique at the Piazza San Giovanni in Florence, refurbished and reopened in 2001, serves as a special meeting point of fans and the brand ever since.

The exciting underwater brand ascended in 1993 with the first collections targeting the civilian market and since 2004 Panerai has been sailing with pride on the surface. The company has been sponsoring the international circuit of regattas for classic yachts, the Panerai Classic Yachts Challenge, where their Eilean, the restored 1936 22-metre Bermudian ketch also takes part year after year.

Panerai is a company full of stories, which were penned this year in a magnificent album by well-known figures, such as Italian historian and art critic Philippe Daverio, English and Italian journalists Simon de Burton and Fabio Pozzo, watchmaking expert Giampiero Negretti and professor Paolo Galluzzi, the Director of the Museo Galileo-Istituto e Museo di Storia della Scienza, Florence. Beautiful photos accompany the text along with drawings by the Italian illustrator Victor Togliani. The book was published this summer by the Italian publishing house Marsilio, and the distribution was launched on 15 September in four languages (Italian, English, Chinese and Japanese).

The timepieces lined up on the podium as well as the Panerai Book were introduced by Mr. Silies, Mr. Ceppi and the local Panerai team. 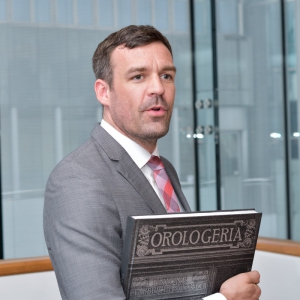 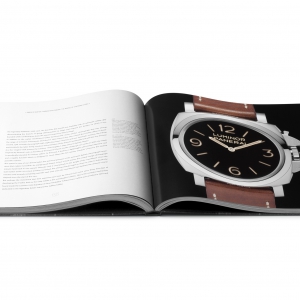 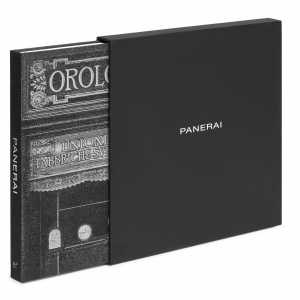 Panerai’s timepieces belong to the “classics of modernity” – as Philippe Daverio described the designs surviving the obsolescence of fashion. Radiomir 1940 is drawn by these lasting lines. The company came out with several manual and automatic timepieces built on their own movements.

Radiomir 1940 3 Days is fitted with the new 4Hz hand-wound P.1000 calibre with two barrels supplying a 72-hour power reserve. The 3.85mm thickness allows a similarly slim watch, which is an absolute pleasure to wear. The 42mm diameter case comes in two versions: Oro Rosso, aka 18ct. red gold and the Acciaio in 316L stainless steel. I just love the light green alligator strap reflected by the shiny metal standing in contrast with the black sandwich dial. The numerals are coated by Super-LumiNova®, of course. With the external attributes of the steel version, but embedding the P.4000 automatic movement Radiomir 1940 3 Days Automatic Acciaio is somewhat thicker, yet still elegant. 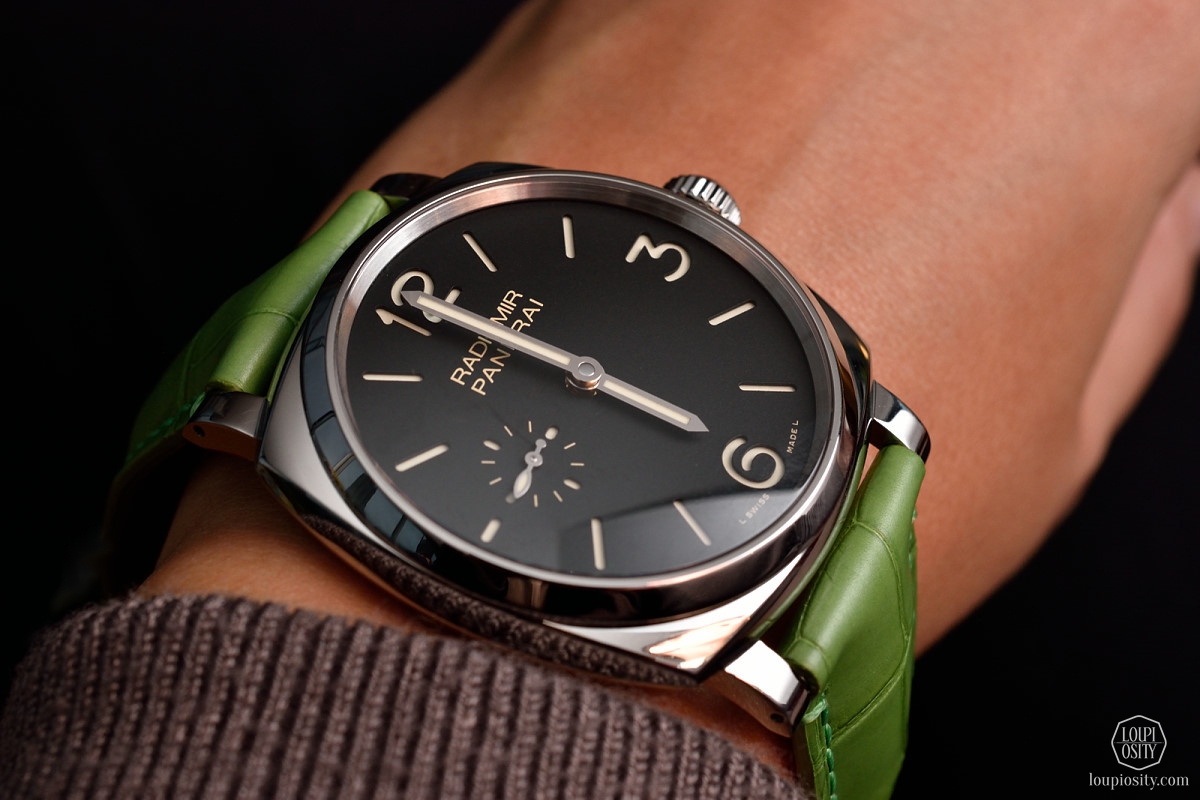 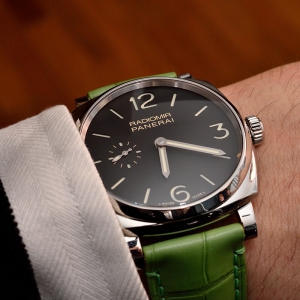 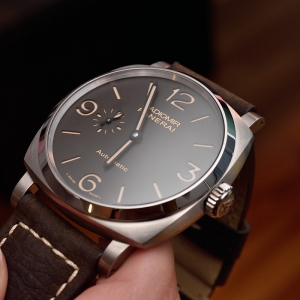 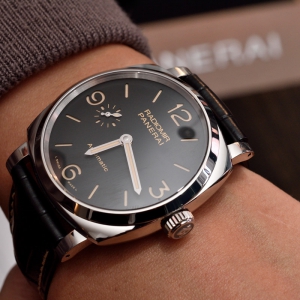 The first skeletonized automatic movement of Officine Panerai was placed in the Special Editions product line of the brand. The 45mm Radiomir 1940 10 Days GMT Automatic Oro Rosso comes in black and brown versions, each in a 150-piece limited contingent. The 299-part calibre includes 3 large barrels storing energy for 10 days, indicated at 6 o’clock. Date is displayed at 3 o’clock, while the home time is indicated on the opposite side. The oscillating weight is skeletonized providing a greater view of the calibre P.2003/10. 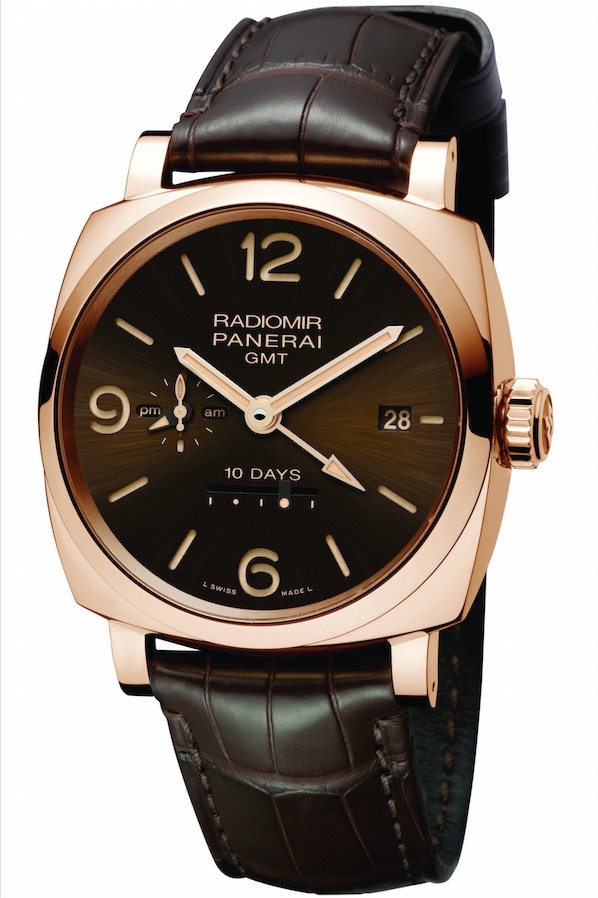 As a nod to fellow Florentine compatriot Galileo Galilei, Officine Panerai introduced the 30 piece limited Lo Scienziato – Radiomir 1940 Tourbillon GMT Oro Rosso. The skeletonized and manually-wound P. 2005/S in-house movement can be admired in its entirety from the front and the back, revealing the 30 seconds tourbillon. The warm red gold bezel does have a nice marriage with the black technical dial, evoking emotions even from the most unconcerned humans around. 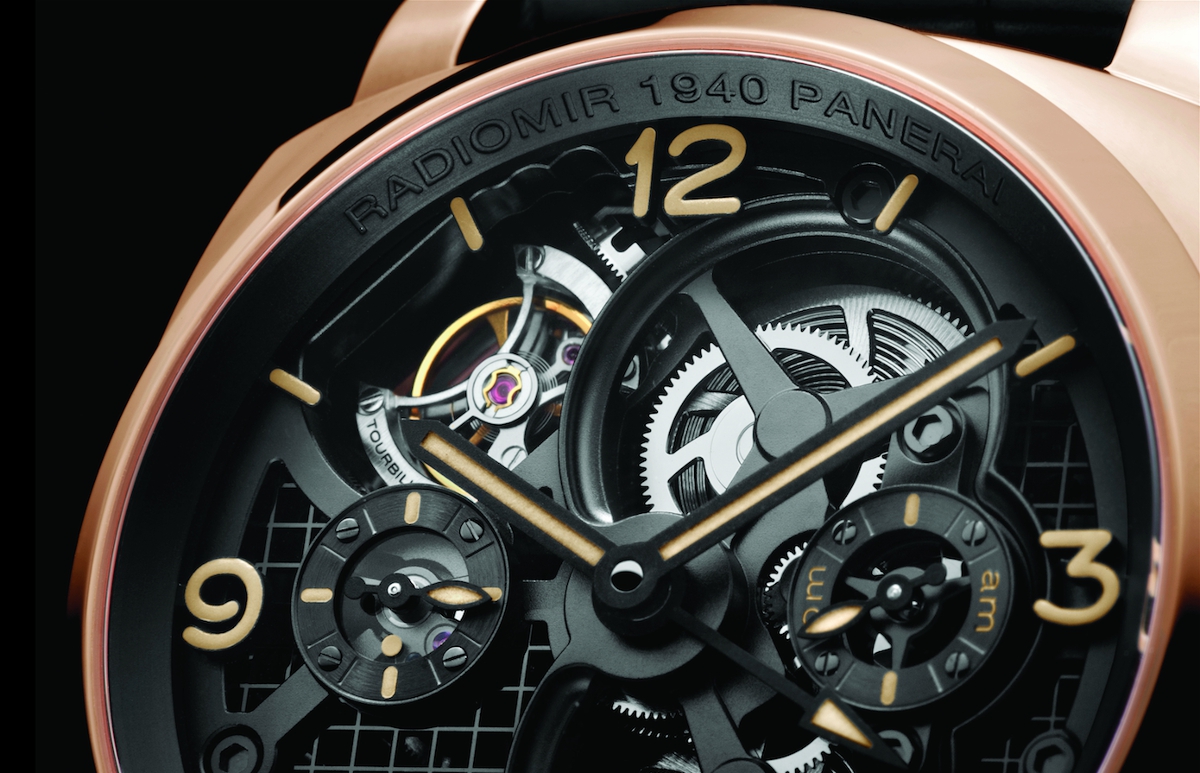 We browsed through timepieces from the former collections too, such as the Radiomir California 3 Days Acciaio with a dial with alternating Arabic and Roman numerals and marker figures or the matte black ceramic Luminor 1950 3 Days Chrono Flyback Automatic Ceramica (2014). 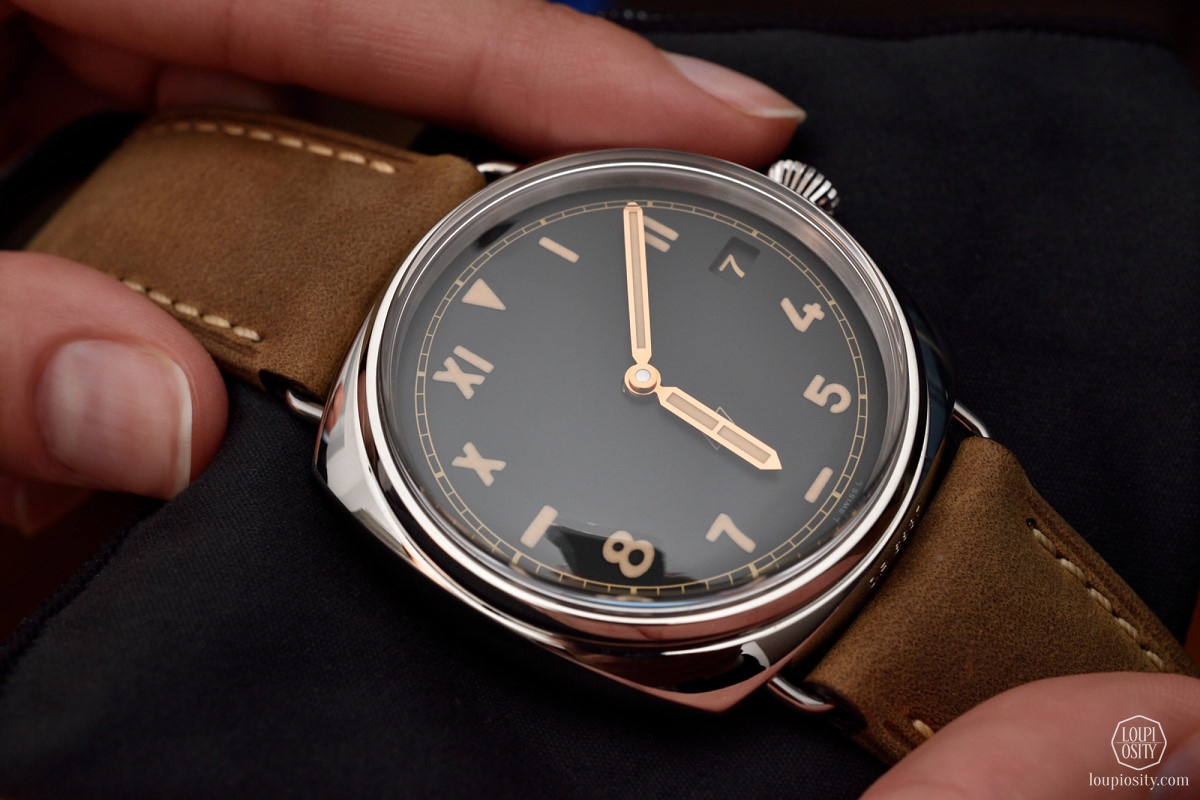 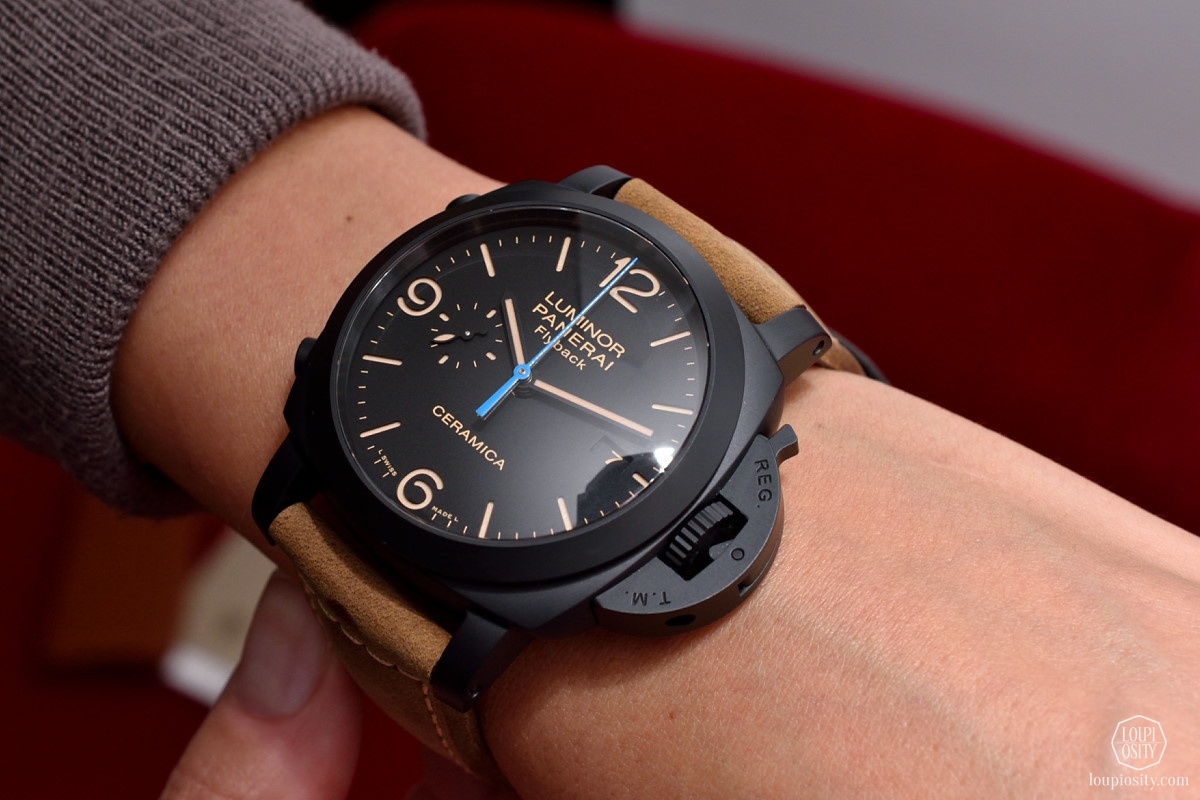 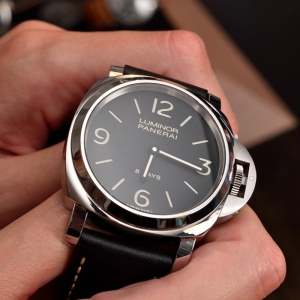 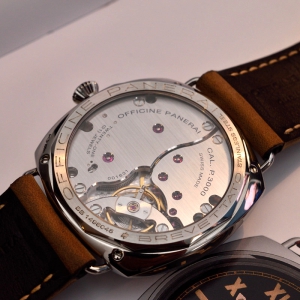 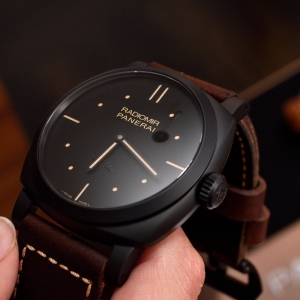 Panerai at Watches and Wonders 2021 At this year’s Watches and Wonders Panerai presented new Luminor and Submersible timepieces and with their new IOC-UNESCO cooperation the Neuchâtel-based manufacture reinforces its commitment to a sustainable environment and a healthy ocean.Panerai - Watches and Wonders 2020 At this irregular edition of the Watches and Wonders 2020, Panerai celebrates the Luminor substance and the 70-year old case design.Homo Faber 2022 The motto - ‘Crafting a more human future’ - of Homo Faber reflects the dedication for the beauty of creation, and the amazement of the ever-curious free mind. The Homo Faber opened its gates on the island of San Giorgio Maggiore between 10 April - 1 May, 2022.