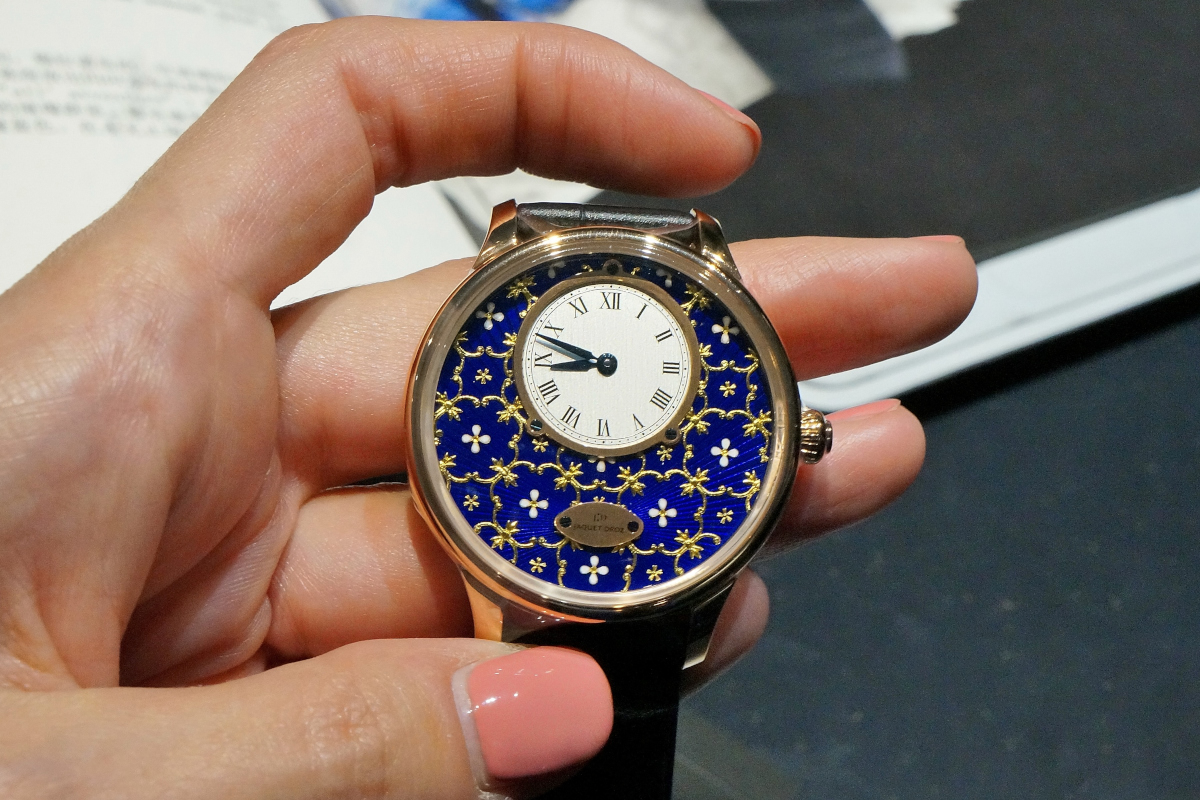 Basel showed its warm side this year. In spite of the fact that it was almost a month earlier than in 2013, the temperature climbed up to the heights of low 20s and we had seven sunny days with no interruptions. Although it was probably the global warming, after our visit to Jaquet Droz I’ve been playing with the thought that the spring this year was actually brought by their singing birds. One just landed on the desk at the start of our discussion and commenced his carelessly joyful singing. 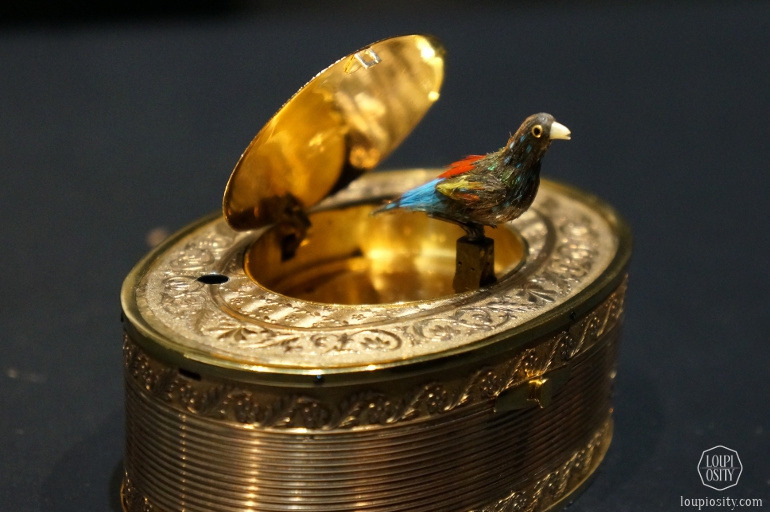 What I love about Jaquet Droz is that they do not need any techno-fluff to create something exciting. A simple, but perfectly finished Grand Feu enamel is enough to raise tempers, like in the Petite Heure Minute 35 mm Ivory Enamel pictured below. The manufacture has mastered the various enamelling and other decoration techniques and their expertise has been showcased also in this year’s novelties. 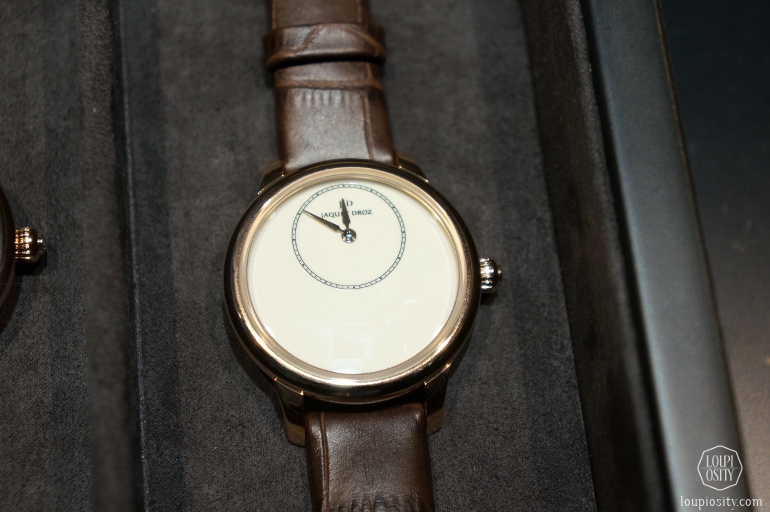 Inspired by a pocket watch that Pierre Jaquet-Droz designed, the Grande Seconde collection was born. The Grande Seconde Quantieme Ivory Enamel announced at Baselworld is again a taste of the Maison’s exquisite savvy and perfectionism. The Ivory Grand Feu enamel is processed on two layers and while the sub-dial on the top is in level with the dial, the combined seconds and date sub-dial is sunk. The movement has undergone developments and a new silicon balance spring is used in order to increase stability in magnetic fields and changing temperatures. The ivory colour goes very nicely with the two types of cases offered, red and white gold. 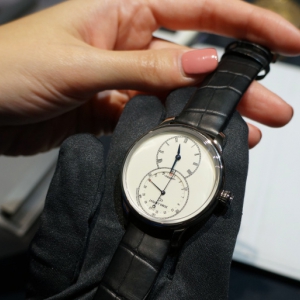 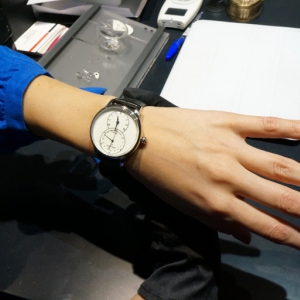 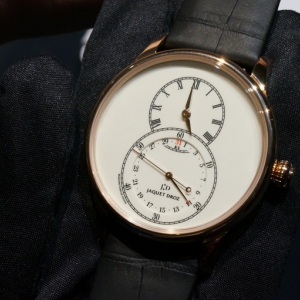 In the 18th century a special method was developed called paillonné enamelling, when a foil (or paillon) is placed between two layers of enamel and then fired at high temperatures several times to let the colours and the motif appear slowly. Jaquet Droz has been using this technique with gold and azure and the result is breathtaking. The same Grande Seconde and the Petite Heure Minute seen previously show a completely different face, in perfect harmony with the pocket watch that the Masion complemented the collection with. The latter has a golden chain with the winding key and a clip. These artistic works are limited to 8 pieces each. 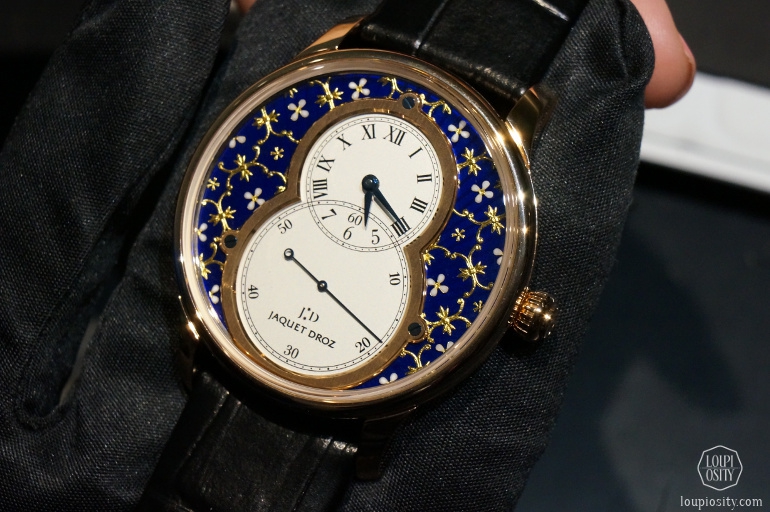 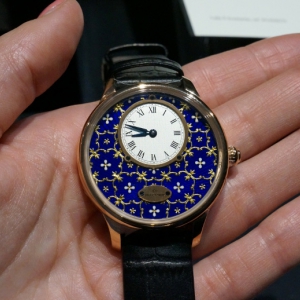 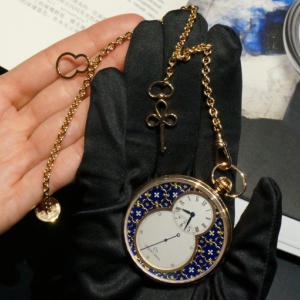 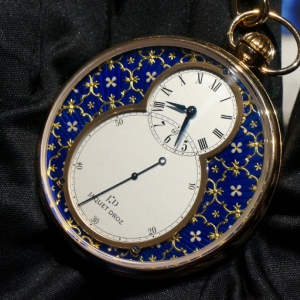 Giving a sportier look to the classical Grande Seconde, the brand launched the Grande Seconde SW collection in 2008, which at Basel welcomed three new versions. The new pieces stepped a bit closer again to the classical brothers by receiving alligator leather straps, instead of those made of rubber and metal. The grey, anthracite grey and blue dials all wear a Côtes de Genève pattern and for the first time the timepieces come in two sizes, 45mm and 41mm. 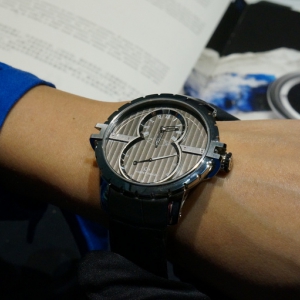 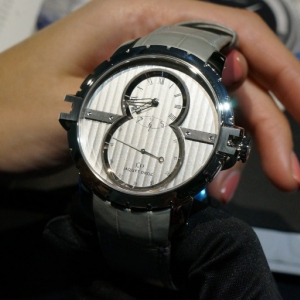 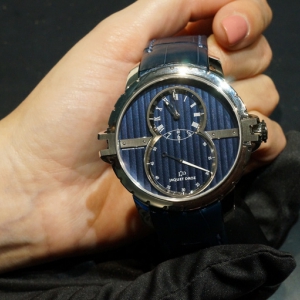 This timepiece was issued somewhat earlier, but this was the first time that I could hold it in my hands. As I always say, good balance is the key in everything. Diamonds on this watch rather enhance the naturally graceful contours of the Grande Seconde, than overpower it with their own shape and glitter. The gemstones as well as the sub-dials are highlighted by the deep blue aventurine. The stone is a form of quartz and the little glistering effect inside it is attributed to mineral inclusions. Like shining through the night, the mother-of-pearl sub-dials, one of which embraces a tourbillon, demand the attention of the observer. 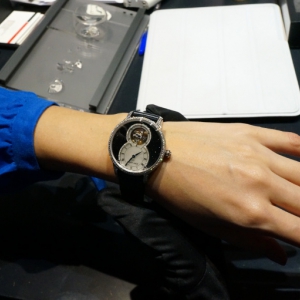 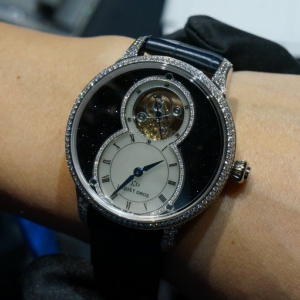 The engineering genius of Pierre Jaquet-Droz has created the Writer, the Draughtsman and the Musician automata devices that travelled from one European royal court to another in the 18th century. To prove that the spirit and the talent of the great predecessor are still alive within the walls of Jaquet Droz, the company dreamt and produced new automata recently. Last year, the Charming Bird Automation Watch evoked the heydays of the House, this year the Signing Machine was introduced. It is not bigger than a smartphone and uses the same cam technology as the historical pieces. When wound up you can release the hinged arm and by standing the ultra-light pen in its hole, the automata starts writing the owner’s signature with perfectly fluid script. For security reasons, there’s a 4-digit lock just like on a suitcase. I’m not sure how useful the device is in the real life, but it is a true mechanical technical marvel indeed. 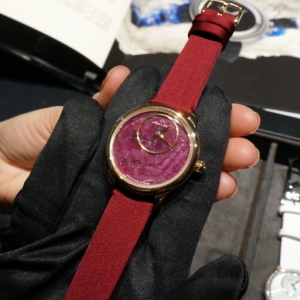 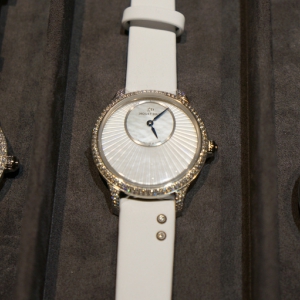 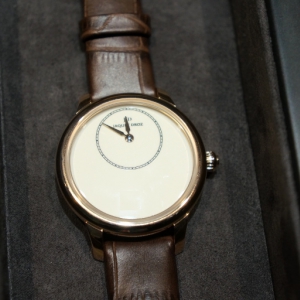 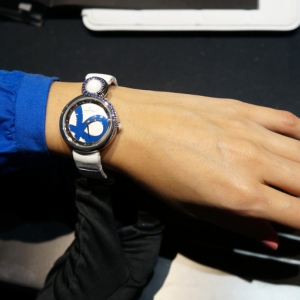 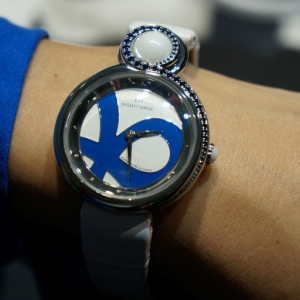 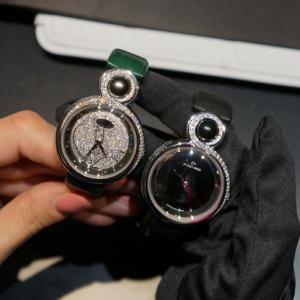 Reuge at the Geneva Watch Days 2021 We visited the most musical suite of the Beau Rivage Hotel during the Geneva Watch Days 2021. Reuge filled the historic space with melodies played by stylish mechanical automations.Independents at the Dubai Watch Week 2021 Under the sunny Dubai sky and the arch of the DIFC Gate Building independent watch brands showcased their special pieces in a great atmosphere. The Brands’ Exhibition hall was bright with smiles and loud from the chit-chat while a number of astonishing models wandered from wrist to wrist. Below are a few exceptional creations by independents.Only Watch 2021 The ninth edition of the Only Watch auction will be held 6 November 2021 in Geneva. The selection includes unique timepieces created by the finest brands to support the research of Duchenne muscular dystrophy.