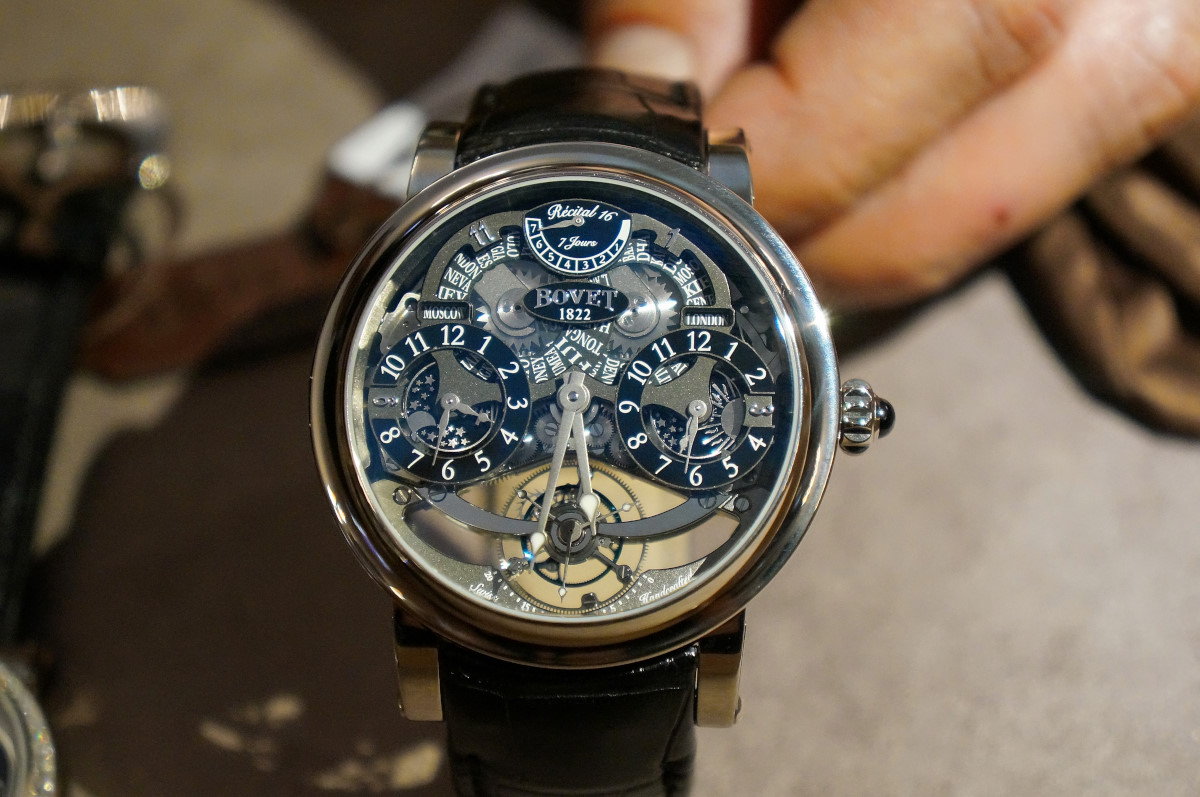 Every watch fan eagerly awaits the fine watchmaking events at the beginning of the year. However brands often don’t debut any great novelties, just a little facelift, for example versions in new colours or materials. Bovet’s new pieces once again didn’t disappoint anyone this year, the manufacture’s artisans spanned a wide spectrum and dared to dream together with the brand’s owner Pascal Raffy.

The stainless steel Amadeo Fleurier “Miss Audrey” introduced in two colour combinations is youthful and graceful, with turquoise or light purple lacquer Guilloché dial and the bezel set with 60 round diamonds . With the Amadeo convertible system the watches can also be worn on a necklace. Just like the brown-grey mother-of-pearl dial Amadeo Fleurier Lotus. The 39mm diameter dial features a blossoming lotus flower set with diamonds.

Last year one of my favourite ladies complications watches was the Récital 9 Miss Alexandra Tourbillon. This model won over the hearts of many people thanks to the artistic appearance, the complications and also due to the perfectly proportioned oval case. Bovet had novelties in store for the fans of serious ladies watches too. The Récital 11 has a Guilloché black mother-of-pearl dial with 10 round diamond indexes. Its self-winding mechanical movement has a 72 hours power reserve. In the moon phase module, the moon lays on the dial itself and a little 8-shaped disc moves in front of it, which is engraved according to an exact cartography of the lunar surface. Setting the moon phase doesn’t require any additional tool; the corrector has been placed concentric to the winding and time-setting crown. The Récital 11 is available in 18-carat red or white gold and can be decorated with round or baguette-cut diamonds. Similar to the Récital 9 it will sweep many ladies off their feet with its exquisitely fine and detailed finish… 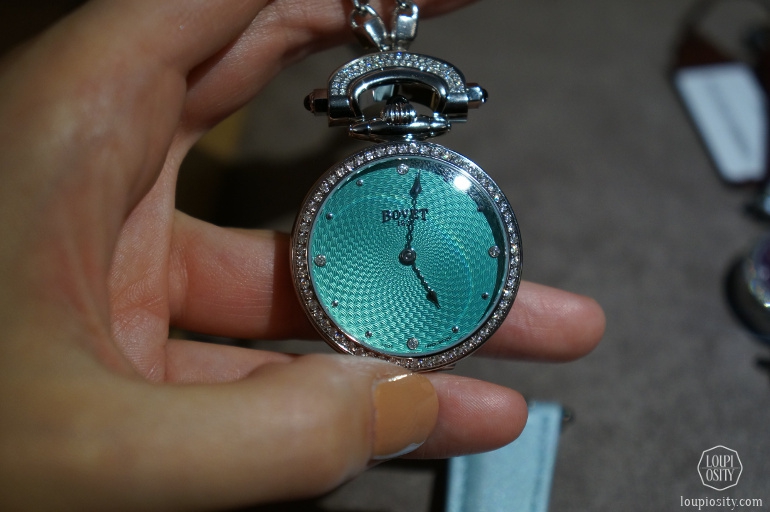 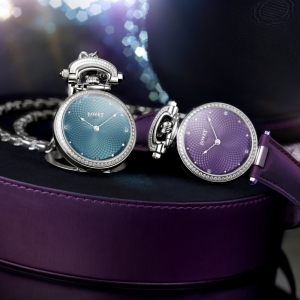 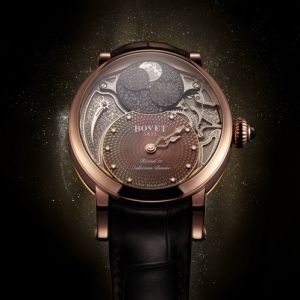 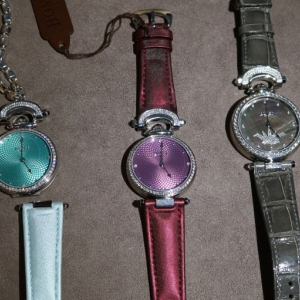 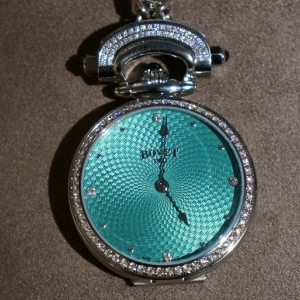 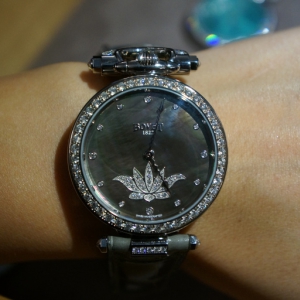 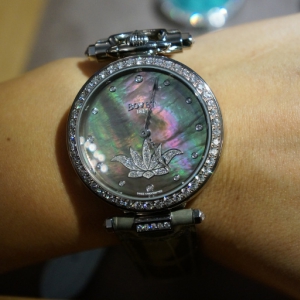 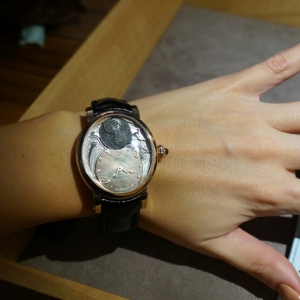 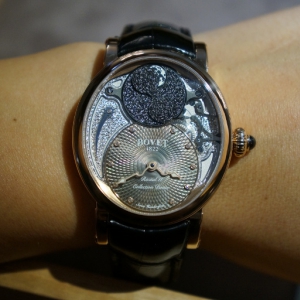 The new 250 piece limited edition BOVET by Pininfarina “Sergio” Split-Second Chronograph model of the cooperation (BOVET by Pininfarina Collection) launched in 2010 will be particularly exciting for fans of Italian car design. Sergio Pininfarina obtained an engineer degree in 1950 at the Politecnico di Torino and then embarked on a career in industrial design. In 1965 urged on by the personal influence of Pininfarina, Enzo Ferrari decided to design a new sports car with the engine in a new position. This became the Ferrari Dino Berlinette Speciale, but his well-known industrial designs also include the Ferrari Testarossa.

One of his sons, Paolo Pininfarina debuted the “Sergio” Ferrari designed by Pininfarina sports car at last year’s Geneva Car Salon. He wished to commemorate his father, and also commissioned the artists at DIMIER 1738 to design the matching watch. This split-seconds chronograph features a small-second, a 30 minute counter and a power-reserve indicator, and it can measure any number of intermediate times. The exterior of the watch was inspired by the lines of the Italian sports car; two areas of the dial are perforated with multiple micro-apertures. The shape of the sub-dials was inspired by the vehicle’s aerodynamic elements. The case has an anthracite ruthenium treatment which creates interesting “volume” and structure for the watch. 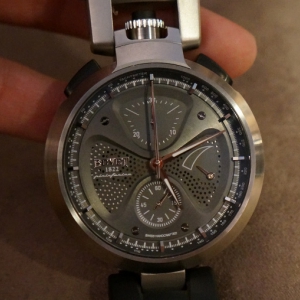 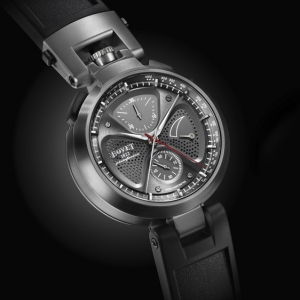 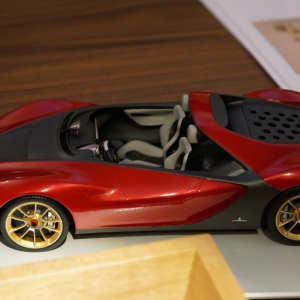 The Dimier collection’s Récital series always offers interesting pieces. The Récital 12 “Monsieur DIMIER” Calibre Virtuoso II Spécialité Horlogère Dimier 1738 limited edition timepiece is powered by the first non-tourbillon movement developed and manufactured entirely by the DIMIER Manufacture. Bovet strives to offer an increasing number of its pieces with entirely in-house movements. Naturally several years of development precede each new concept, and even so not every idea is realized in the end. For eyes used to Bovet’s pieces, at first glance it may come as a surprise that the case is thinner than so far, thanks to the 3.9mm thick movement. The Récital 12 has an off-centre dial at 3 o’clock. The dial is framed by the Côtes de Genève decorated surface of the bridge, which features two symmetric cut outs. Through one of these, the power-reserve indicator is visible, while through the other one can see a segment of the single barrel. This barrel guarantees a seven day power reserve within the strict accuracy requirements of Haute Horlogerie. 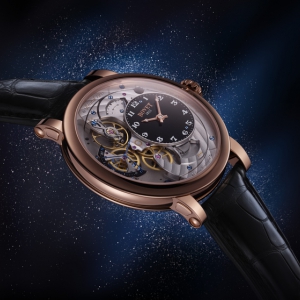 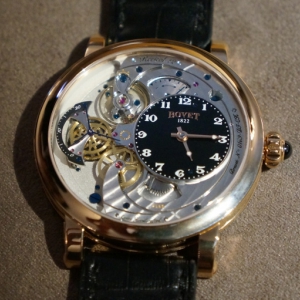 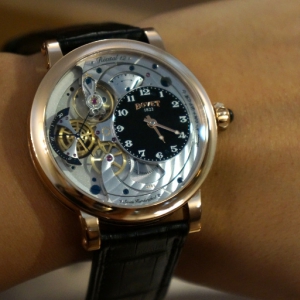 The same debuting Virtuoso II movement operates the 60-piece limited edition Récital 15 too; however in this piece it shows a different side. The dial found at 3 o’clock has a jumping hours on its’ right, and a retrograde minutes indicator on its left. The jump of the hours digit and the minutes-hand is in perfect sync thanks to the star-wheels visible in the centre. The seconds-hand at 9 o’clock hides a secret – when you flip the case another seconds-hand on the same axis becomes visible. Of course, the direction of the rotation is reversed. The variability of the Virtuoso II sprung-balance movement can be observed again when, by casing the same engine differently, the power reserve indicator appears on the back of the timepiece. The dial rings are carefully lacquered and may be chosen in two colors, white or black. The 42mm timepiece is a mere 12.8mm thick, which makes it rather comfortable to wear. 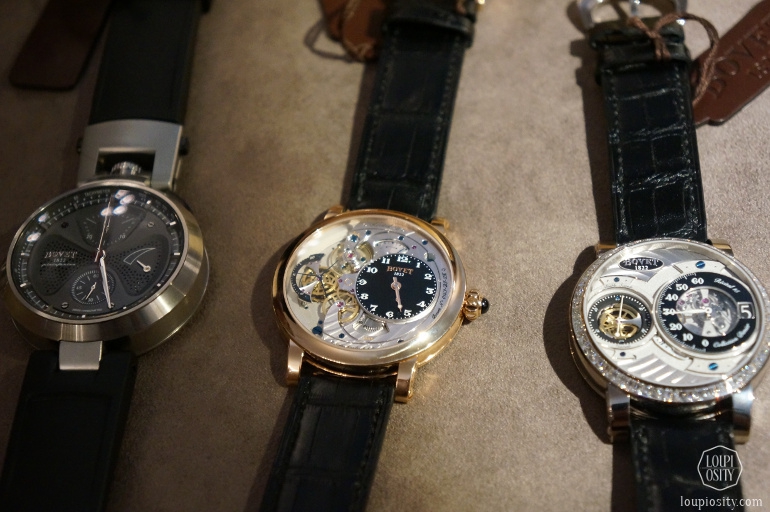 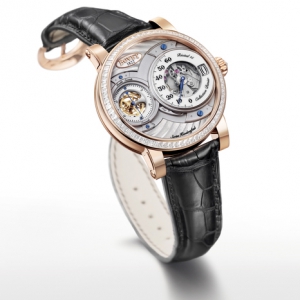 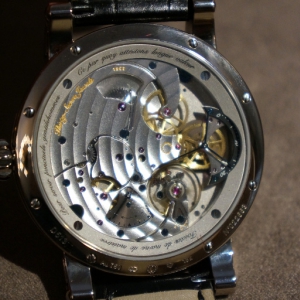 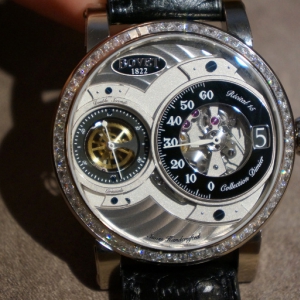 Grand complications always require the most outstanding technical know-how of fine watchmaking. This is no different in the Récital 16 either. It is immediately obvious that it is complicated not only in the technical but also in the aesthetic sense, nonetheless it is a carefully thought-out watch. The construction of the dial is logical, and can be read easily despite the watch movement being visible in its entire depth. Like the atmosphere around the Earth so does the red or white gold case cuddle up to the 595 components responsible for measuring time in any three time-zones. It is as if the tourbillon bridge lying between 4 and 8 o’clock in a shape reminiscent of Dalí’s moustache that is so typical of the DIMIER collection seems to be supporting the three black lacquer dials by itself. The hands for the local time stand out clearly, while the two smaller sub-dials of the remote time-zones individually received 24-city discs and day/night indicators, too. The two barrels supply energy for 7 days accurate operations. The Récital 16 is limited to 20-20 pieces in red and white gold. 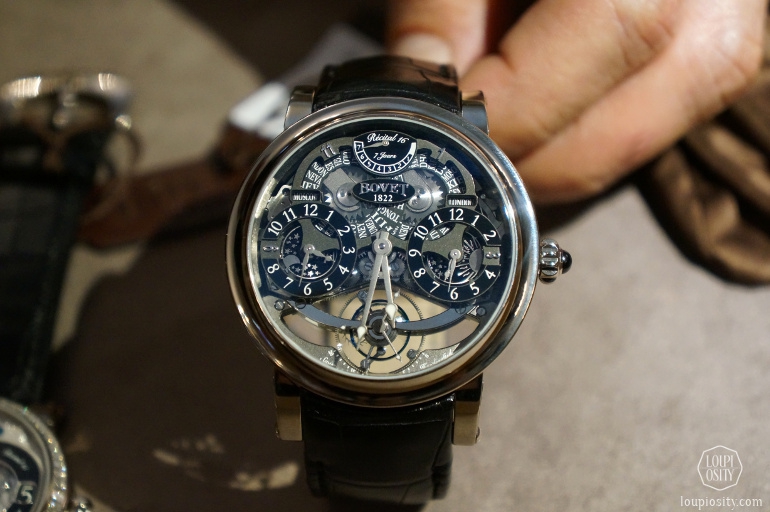 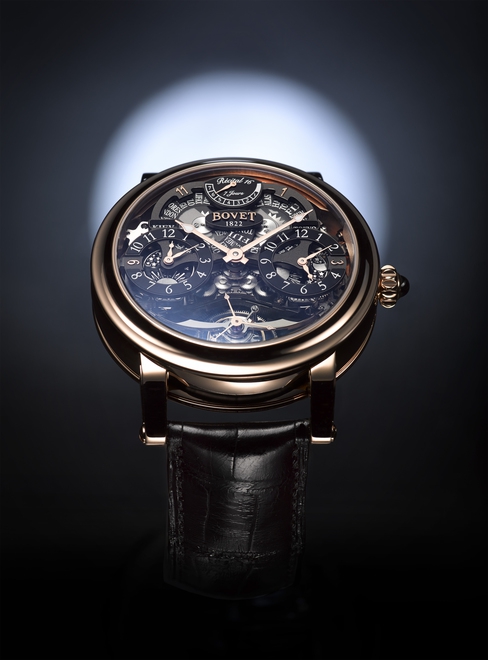 Before I introduce you to a magnificent piece, I would like to invite you for a bit of time travelling. Before Eduard Bovet started his company in 1822 on a commission by Ilbury and Magniache he had a defining experience in China. Bovet sold 4 pieces of exquisite pocket watches for 1m USD of today’s value within a single day. He built up his company basically to produce richly elaborated and at the same time reliable timepieces to the wealthiest in China. His business model has proven to be successful and by creating celebrated masterpieces Bovet’s name became the synonym for watches in Southern China. These objects of art were blessed by the finest miniature paintings, generous engravings reaching to even the hidden parts of the movement and precise gem settings. Bovet, to let the owner immerse in the sight of the ornaments on the running movement, pioneered the usage of transparent case-backs. During my visit at Bovet’s workshop at the Château de Môtiers castle I observed the Fleurisanne motif on these beautiful movements. What I fell in love with was the usage of blued screws and similar dynamic inertia-blocks which stand in harmony with the engraved gold plates. Well, the freshly presented AmadeoFleurier Tourbillon Virtuoso III reminded me immediately of those 19th century timepieces.

The Amadeo Fleurier Tourbillon Virtuoso III has a sapphire front and back giving full visibility to the Fleurisianne engraving on the movement. Blued parts shine like stars in the gold sky. The lacquered dials on both sides attract the eye and offer comfortable and immediate visibility of the time. The indicators of the perpetual calendar are placed on the front of the timepiece around the dial. A concentric ring with Arabic numerals and a retrograde hand show the date, around which the day of the week is situated at 9 o’clock, the month at 3, while leap years are displayed at 12 o’clock. For these, Bovet used sapphire painted discs in front of shaped lacquered plates, which allows good readability of information and at the same time an even greater window to the movement. The power reserve indicator appears at 12 o’clock on a concentric disk for the leap years. Thanks to the Amadeo case design, the timepiece can be worn on either sides or as a pocket watch, as well as placed on a table like a clock. This justifies the tourbillon perfectly, which was invented in order to average out the effect of gravity on vertically stable balance wheels in timekeepers like pocket watches and clocks. 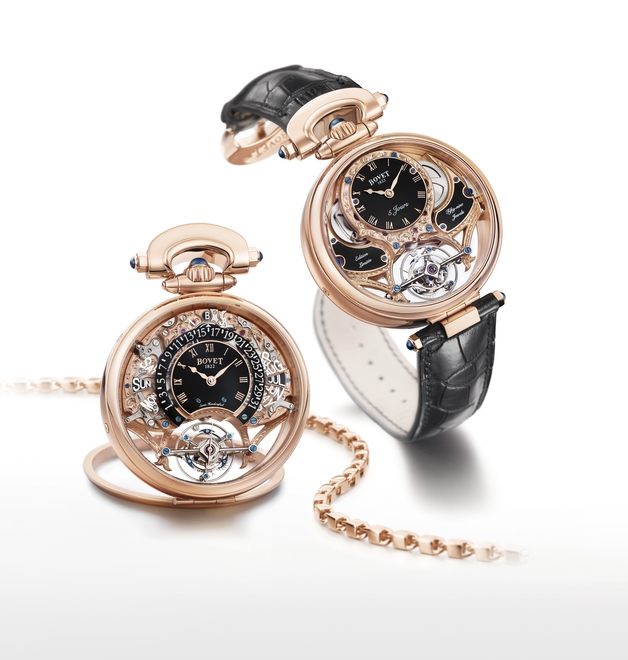 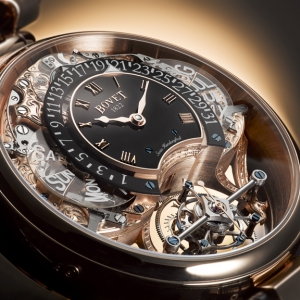 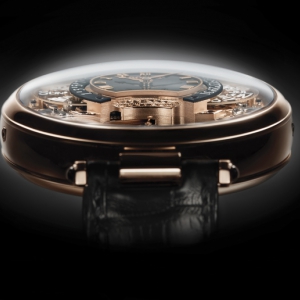 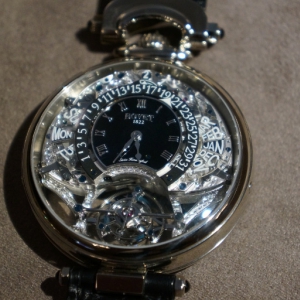 Photo credits: BOVET, Loupiosity.com.
All registered trademarks are property of their respective owners.
All rights reserved.