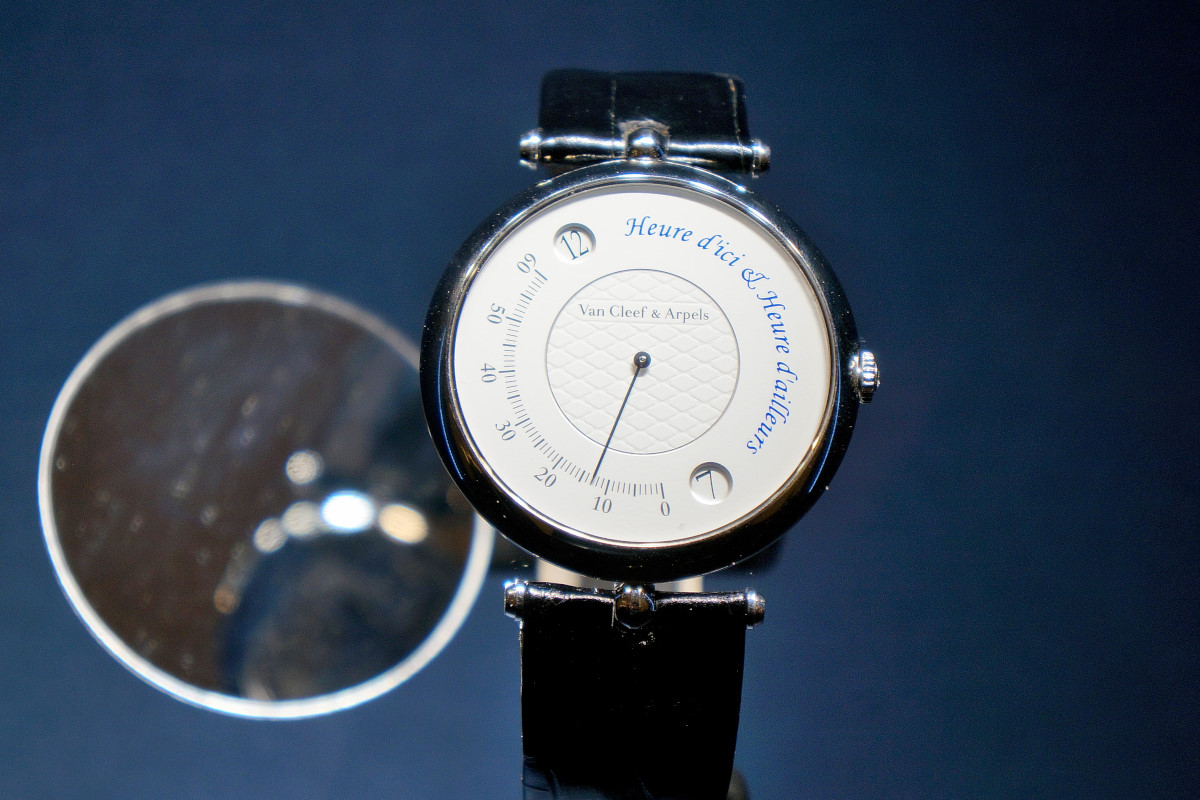 The sky, the planets and the stars have preoccupied people since ancient times and many sciences have been established on their research. This year Van Cleef & Arpels introduced a rather unique artistic version of a miniature “sky” that can be worn around the wrist. On the dial of the pink gold Midnight Planétarium Poetic Complication 6 planets orbit the Sun, and the movement of each planet is true to its genuine length of orbit: it will take Saturn over 29 years to make a complete circuit of the dial, while Jupiter will take almost 12 years, Mars 687 days, Earth 365 days, Venus 224 days and Mercury 88 days. Thus even the children of the watch’s owner will be able to witness a single full orbit of Saturn. The sky and the planets are made of various gemstones: aventurine, serpentine, chloromelanite, turquoise, red jasper, blue agate and sugilite.

The Maison developed the model consisting of 396 pieces together with Christiaan van der Klaauw. Christiaan van der Klaauw, an astronomer, is a member of the Académie Horlogère des Créateurs Indépendants (AHCI) and he himself creates astronomical clocks and wrist watches. This piece is a mechanical masterpiece in which timekeeping is only a secondary function; the time is indicated by a shooting star with 15-minute precision. The owner of the watch can select a lucky day using the rotating bezel. On that given date, the Earth will move to a position directly below the star engraved on the sapphire crystal. 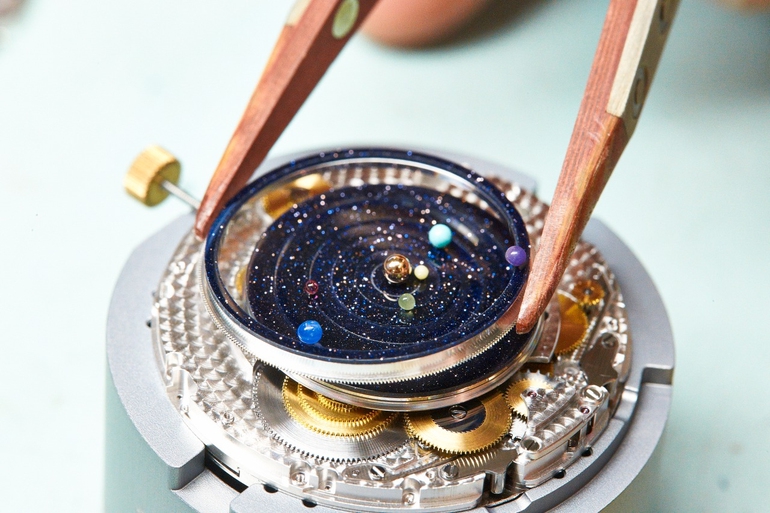 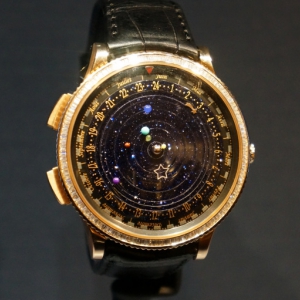 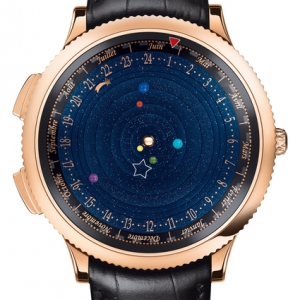 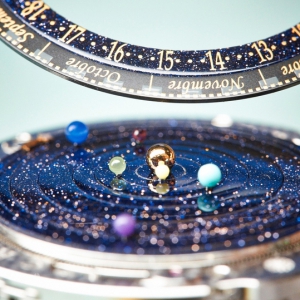 The Extraordinary Dials is a well-known collection of the brand, and it always features highly artistic pieces. The Midnight Nuit Boréale and Nuit Australe are inspired by the Northern and Southern hemispheres. The Midnight Nuit Boréale model features the creatures of Greek mythology. The Midnight Nuit Australe model pays homage to the observations about constellations on the sky from the 16th to the 18th centuries. The uniqueness of each limited edition of 22-pieces is the grisaille enamel technique used on the dial. Originally grisaille was a painting technique by which an image is executed entirely in shades of grey and usually severely modelled to create the illusion of sculpture. Similarly in enamel work, only two shades are used. The artist draws very precisely on the dark enamel surface with a finely ground white powdered enamel (‘Blanc de Limoges’). The surface and the drawings must be fired numerous times, thus lending various tones of color to the lines. 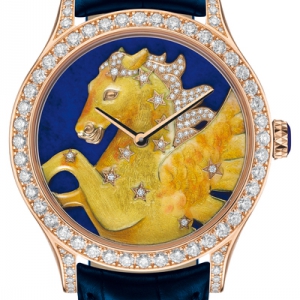 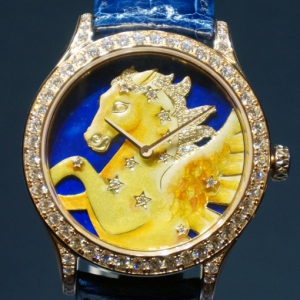 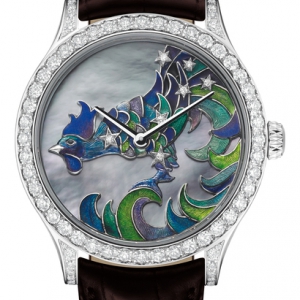 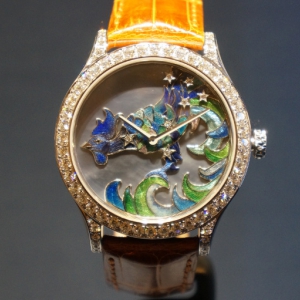 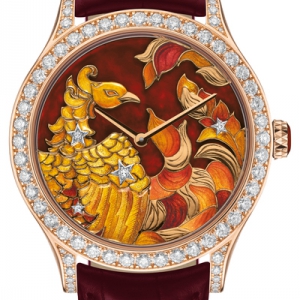 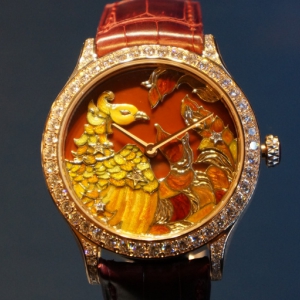 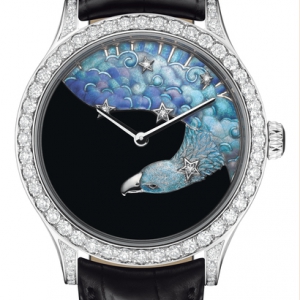 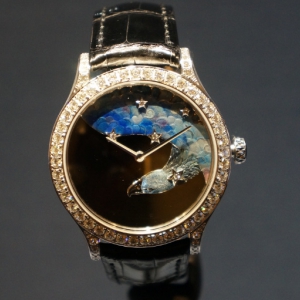 Whether we believe in horoscopes or not, the Lady Arpels Zodiac featuring the 12 Western zodiacs–with translucent enamel and motifs in sculpted gold, engraved and set with stones – is each an artistic masterpiece. The source of inspiration was the zodiac pendants created by the Maison in the 50s, and the high-jewellery pieces created in 2012 around the same topic. 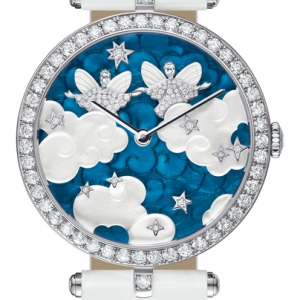 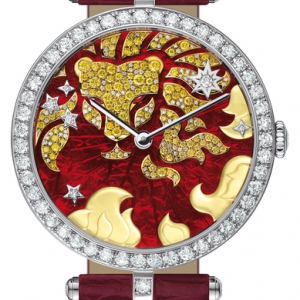 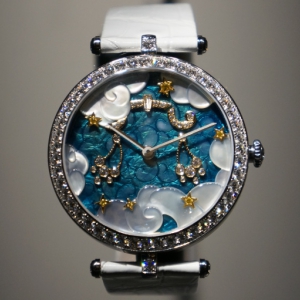 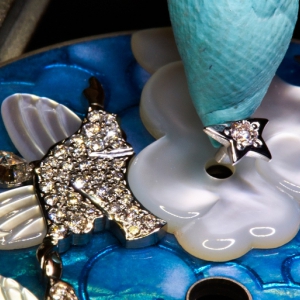 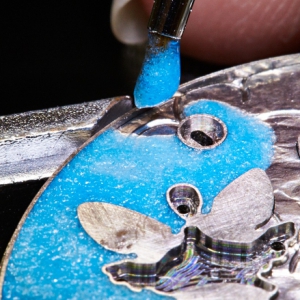 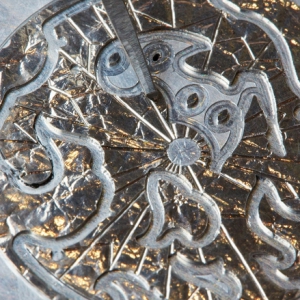 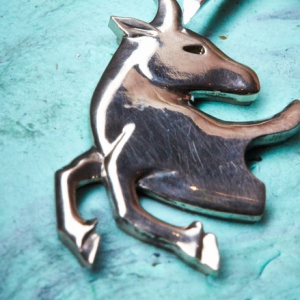 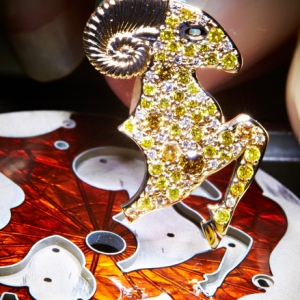 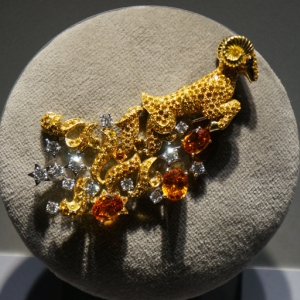 In 1949 Pierre Arpels designed a watch for himself – he can be seen wearing this watch on several photographs. The Pierre Arpels watch embodied Pierre’s taste, lifestyle, and graceful masculine elegance. The white gold Heure d’ici & Heure d’ailleurs with dual-time movement commemorate Pierre’s cosmopolitan lifestyle. He travelled a great deal and was inspired by various cultures whilst searching for exquisite gemstones for his clients. The self-winding mechanical movement was developed by Agenhor especially for Van Cleef & Arpels with double jumping hour and retrograde minute. (Agenhor, Atelier Genevois d’Horlogerie is an independent watchmaking company in Geneva, specialising in the design of complex mechanical modules.)

A further piece of the Pierre Arpels collection is the 38 and 42 mm Platine, that is a simple yet sophisticated choice for almost all occasions. The middle of the black dial is decorated by piqué motif, inspired by black-tie shirtfronts. 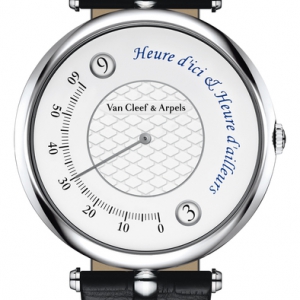 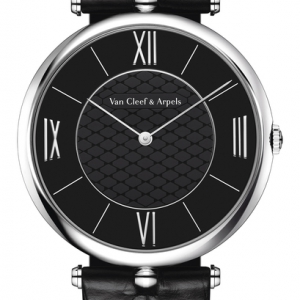 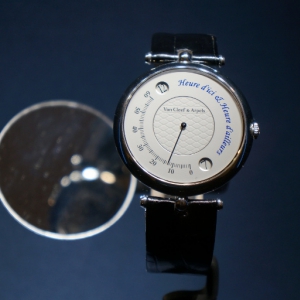 The L’ÉCOLE Van Cleef & Arpels opened two years ago and ever since, over 2000 students have gained insight into the exciting world of high jewellery, fine watchmaking and gemstones. This year the school moved to a new location under 22 Place Vendôme, and it awaits prospective students with 2 class rooms, 4 workshops and a library.

Within the framework of the SIHH we got a taste of the world of colorful gemstones under the guidance of Dominique Dufermont. We overviewed the classification of the stones; grouping them into precious, fine and ornamental categories. In the case of a color gemstone, the more even its color, and of course the more clear, the more valuable it is however certain inclusions help to determine the provenance of a stone and also provide information about whether or not the stone was treated in any way. As a diamond grader I found it particularly interesting to hear that the 4 C concept used while discussing diamonds has been expanded with a 5th C, Character. (The concept of the 4 C-s of diamonds was introduced to consumers in 1939 as a means of qualifying the rarity of a diamond. The 4 C-s are the color, cut, clarity and carat weight). Character is what makes a gemstone particularly interesting and “loveable”. Van Cleef & Arpels uses such stones in many of its jewelleries. 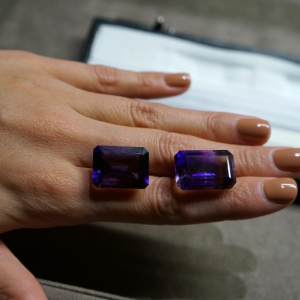 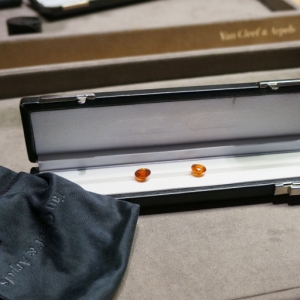 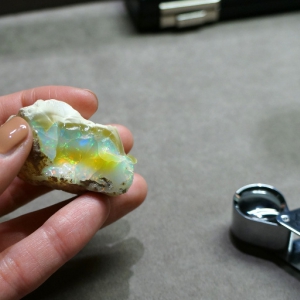 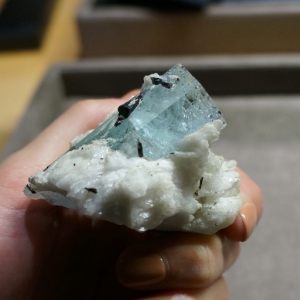 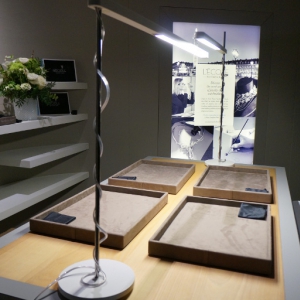 The stellar odyssey Jaeger-LeCoultre summoned the starry night skies of the Vallée de Joux in the dazzling bustle of the Watches and Wonders. Among other creations the manufacture presented two new celestial timepieces based on the fantastic Calibre 945 and an Atmos clock displaying the relative positions and movements of Earth, the Moon and the Sun.Girls don’t just wanna have fun – Part 23, Watches and… In this series we showcase mechanical and artistic wonders that were especially designed for women and others originally for men that come alive on spirited ladies’  wrists. We participated at the Watches and Wonders 2022 and we browsed a few novelties. #GPHG2022 The 84 pre-selected watches and 6 clocks of the Grand Prix d’Horlogerie Genève 2022 are competing for the “Aiguille d’Or” Grand Prix or for one of the prizes in the 15 categories that reward contemporary watchmaking excellence.