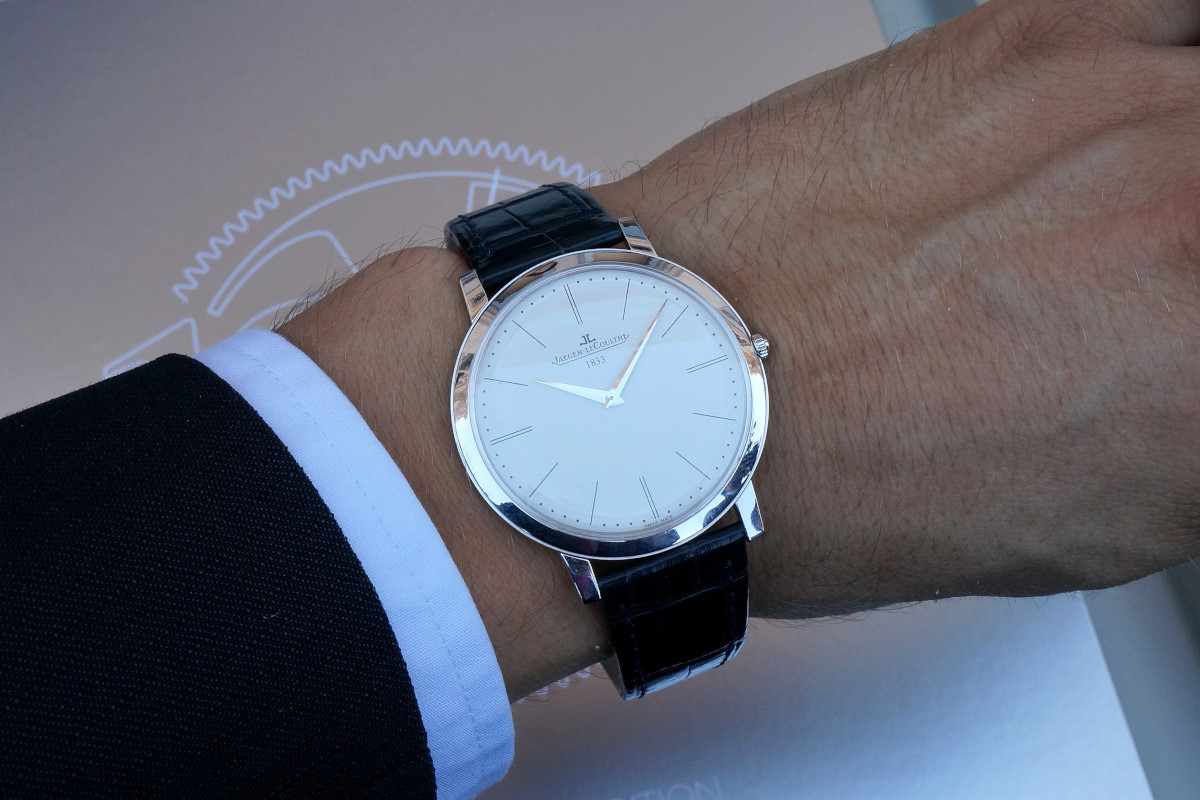 Jaeger-LeCoultre, being an avid supporter of visual arts, has been associated with the Abu Dhabi Film Festival for third year in 2013. The manufacture exhibited vintage pieces as well as novelties during the show. Please see the 1st Part of the article for Ladies’ timepieces.

I find it very exciting when they pay homage to a long and fruitful period by summarizing it in a single collection. The collection reflects the unmistakeable character of the Maison, every piece is the essence of expertise garnered though the years, re-thought according to the taste of our times. The history of Jaeger-LeCoultre is embodied by the Jubilee collection featuring three limited edition models, and at once this is also a tribute to Antoine LeCoultre. Under the logo the watches feature the year 1833 – a reference to the establishment of the manufacture.

The newly presented Master Ultra Thin Jubilee was inspired by a hand-wound pocket-watch from 1907 that remains to be the thinnest to this day. The timepiece that is a mere 4.05mm in thickness is the world’s thinnest mechanical wrist watch, in spite that there is a thinner movement than the Calibre 849 it features. The extremely refined face sits in a 39mm diameter extra-white platinum case. 880 pieces are produced from the Master Ultra Thin Jubilee –it will be the choice of refined gentlemen…

For me the most moving model of the anniversary edition was the Master Grande Tradition Tourbillon Cylindrique à Quantième Perpétuel Jubilee. The immediately transparent watch-face elegantly features a perpetual calendar, moon-phase and a flying tourbillon and it captivates the eye. Above the tourbillon, on its axis a small blue indicator turns to the beat of the seconds. The novelty of the Calibre 985 is the cylindrical balance-spring that makes its debut in this watch. The 22K gold rotor features a reproduction of the gold medal won by Jaeger-LeCoultre at the 1889 Paris Universal Exposition. 180 pieces are produced from this watch.

The Master Grande Tradition Gyrotourbillon 3 is the tenth member of the Hybris Mechanica series. The tourbillon in the heart of the watch is a true feat in which the two carriages rotate in 1 minute and 24 seconds respectively. The hairspring is sphere-shaped, bending it takes two days and it is made entirely by hand. The complication made up of over 100 elements weighs a mere 1 gram. In addition to the Gyrotourbillon the Calibre 176 also contains a chronograph function in which the seconds’ indicator runs on the usual analogue 0-60 scales while the minute counter has a digital visualization. The movement also contains a perpetual calendar, moon-phase indicator, and a minute repeater equipped with a silent governor. 75 pieces are produced from this watch. 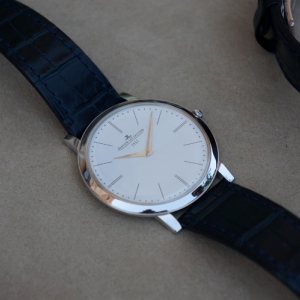 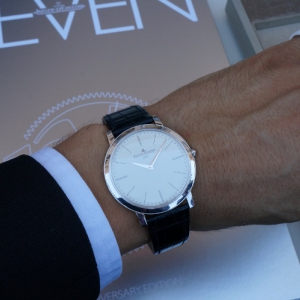 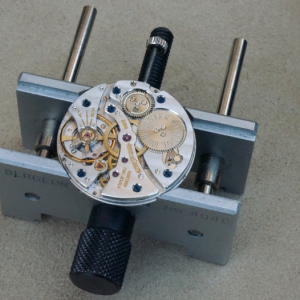 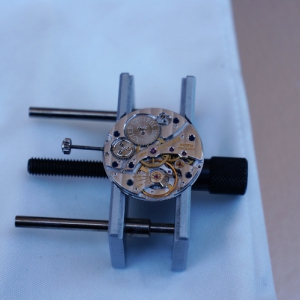 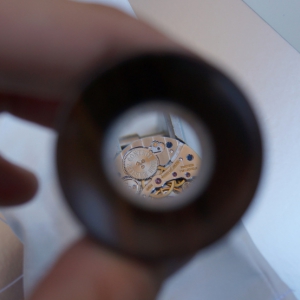 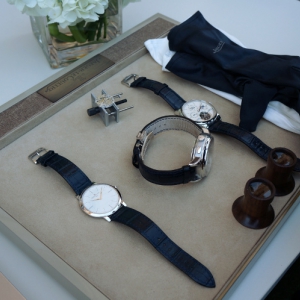 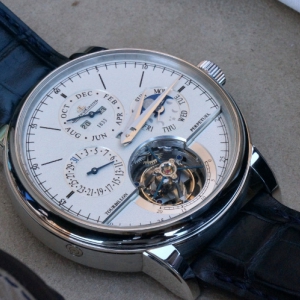 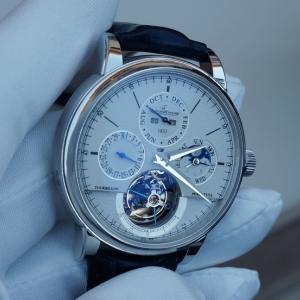 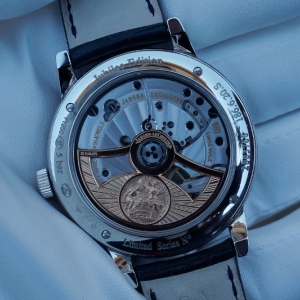 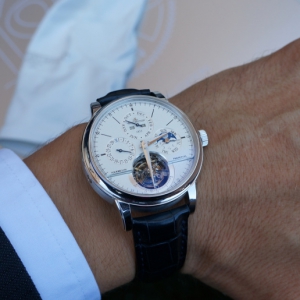 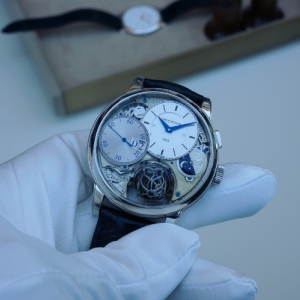 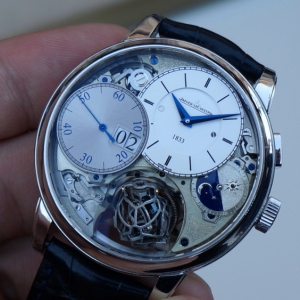 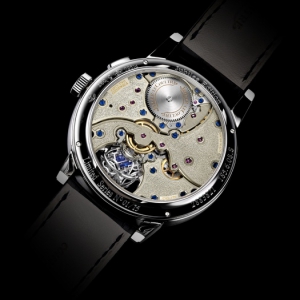 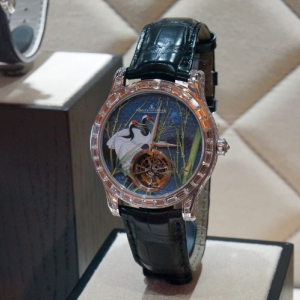 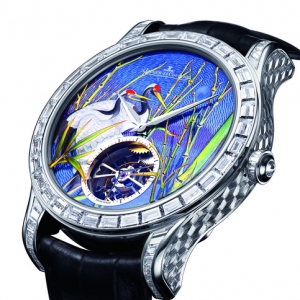 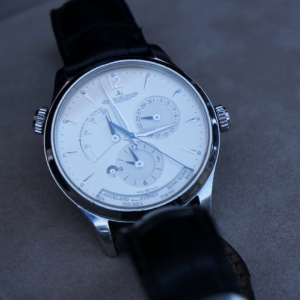 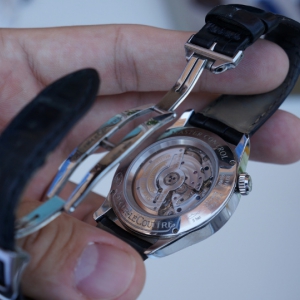 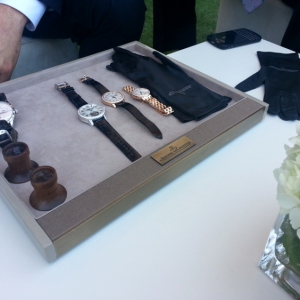 The showcase was far from over at this point. Jaeger-LeCoultre set up a work station in the hotel suite where one of the Grand Maison’s master watchmakers guided the guests into the Lilliputian world. Antoine LeCoultre found the key to miniaturization when in 1844 he created the first instrument in history to measure the micron, called the Millionometer. Since its establishment in 1833 the manufacture has created 1242 different calibres, several of which have been record holders in terms of size to this day from the end of the last century. The brand is also famous for the fact that the majority of movements are not circular in layout and over half of them contain complications. Based on the 1828 prototype of Neuchâtel-born engineer Jean-Léon Reutter the Atmos watch was created in the JLC workshop. This watch is unique because it sources the energy required for it to work from the temperature shifts of its environment – with a 1 Celsius temperature change it works for two full days.

A series of iconic movements appeared by the light of the lamp. The 1 gram Duoplan from 1929 is the ancestor of today’s Calibre 101, and it remains to be the world’s smallest manual watch mechanism. It is named after its structure: its movement is built on two levels, thus enabling it to maintain a large-size balance. The calibre (originally built from 74, now 98 elements) is 14 mm long, 4.8 mm wide and 3.4 mm thick.

The Calibre 174 in the Reverso Gyrotourbillon 2 is a reversible watch mechanism with a sphere-shaped tourbillon equipped with cylindrical balance-spring.

The Calibre 947 is the fantastic sounding mechanism of the Master Grande Tradition Minute Repeater. The two gongs running around the circle of the case are stroked by two little hammers. The case amplifies and enriches their sound, especially the one made of titanium.

The Calibre 380A ticking in the Duomètre à Chronographe was particularly interesting. The two independent power reserves serve the watch and chronograph functions separately. Turning the crown in one direction tightens one barrel spring and vice versa when turned the other way.

I would like to take the opportunity to express my gratitude for the enthusiastic explanation and patience! 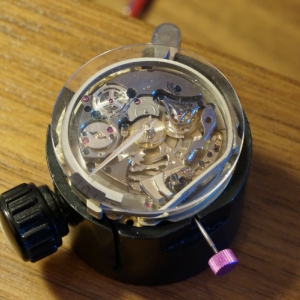 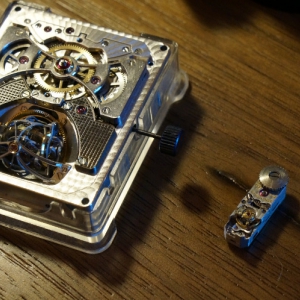 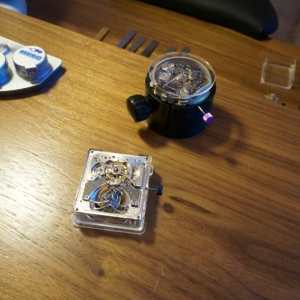 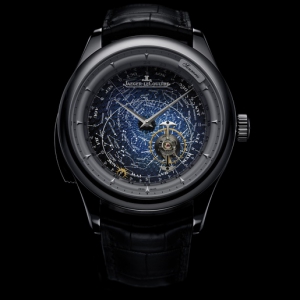 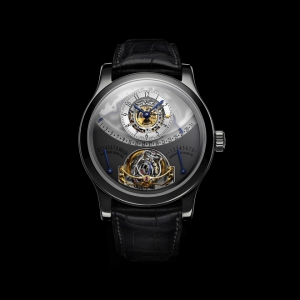 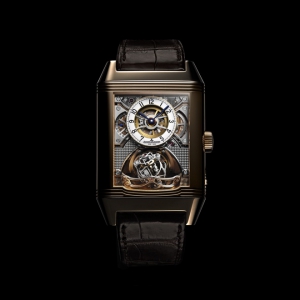 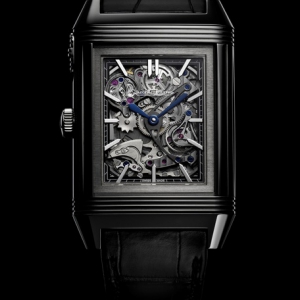 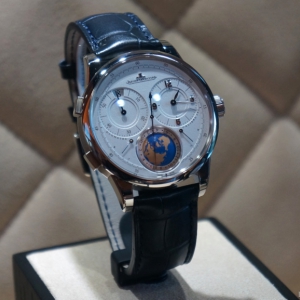 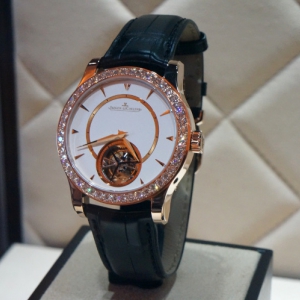 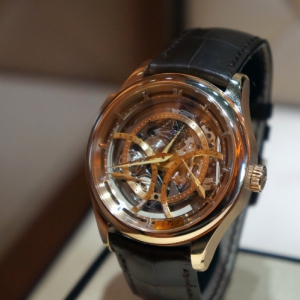 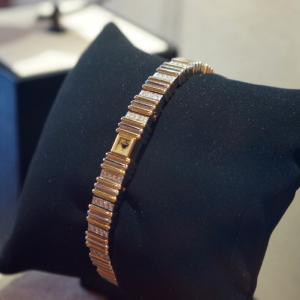 'Details: Genealogies of Ornament' - Homo Faber 2022 The ‘Details: Genealogies of Ornament’ is set in the Nautical School area at Fondazione Giorgio Cini. It is one of 15 exhibitions that comprise the Homo Faber Event 2022, organised by the Michelangelo Foundation. Girls don’t just wanna have fun – Part 23, Watches and… In this series we showcase mechanical and artistic wonders that were especially designed for women and others originally for men that come alive on spirited ladies’  wrists. We participated at the Watches and Wonders 2022 and we browsed a few novelties. The stellar odyssey Jaeger-LeCoultre summoned the starry night skies of the Vallée de Joux in the dazzling bustle of the Watches and Wonders. Among other creations the manufacture presented two new celestial timepieces based on the fantastic Calibre 945 and an Atmos clock displaying the relative positions and movements of Earth, the Moon and the Sun.